The ninth and newest book in Nathan Hale's New York Times best-selling Hazardous Tales series is Major Impossible. It's about John Wesley Powell, a man who didn't let the fact that he lost an arm during his service in the Civil War stop him from leading an exploration of the Grand Canyon a few years later. "He's far down on the list of known American heroes and explorers," says Hale. "I've always wanted to do a book about him. He's this great romantic figure and the first non-Native American to explore the Grand Canyon by river."

As a kid, Hale remembers being fascinated with the Caldecott Medal gracing the cover of his copy of Maurice Sendak's Where the Wild Things Are. "I set my career path early on," he says. "I wanted to get my hands on one of those gold medals." Growing up, Hale drew all the time. His family didn't own a TV. Instead, his father read aloud and Hale would draw pictures, "usually of the TV shows I wished I was watching," he says.

During his senior year of high school, Hale created a choose-your-own-adventure book for a class project. "They took everyone's project to the district bindery and turned them into little bound books," says Hale. After hearing over and over again that he should submit his for publication, Hale sent it off to HarperCollins and promptly forgot all about it. A year later, Hale was attending Cornish College of the Arts in Seattle when he got a phone call from an intern at HarperCollins. "The message said, 'Don't get excited,'" says Hale. "'Your book is completely unpublishable. But in your cover letter you said you were in high school and I just wanted to say, keep it up.' I'll always be grateful for that phone call. It kept me going."

While in college, Hale painted scenery for theater productions. "I got good at painting big things," he says. Shortly after graduation, he drove by the site where a dinosaur museum was being built. He stopped in to see whether they had already hired someone to paint murals, thinking it might be a job opportunity. "The entire interior of the museum had been painted stark white," he says. "Somebody must have put the paleontologists in charge of that. It was terrible." 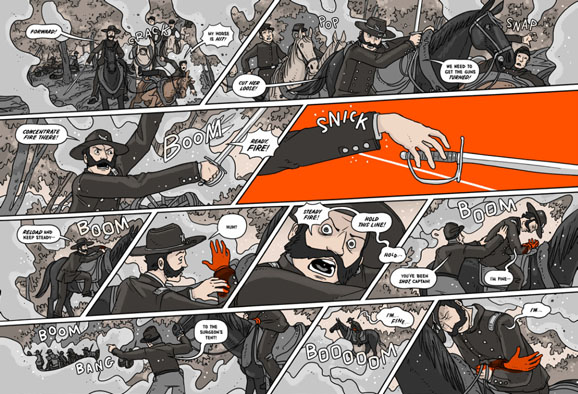 Hale went home and made mockettes demonstrating how his murals could enhance different spaces within the museum. He was hired on a trial basis. "By the end of the year, I had painted every room in their museum," he says. A company installing dioramas at the museum was so impressed with Hale's work, they offered him a job. Today his artwork appears in museums all over the world. Hale worked under the scrutiny of scientists who made sure his paintings were accurate. "It taught me the importance of getting the details right," says Hale. "That's something I carry with me."

Still, Hale was writing at night and on the weekends. "I paid SCBWI dues occasionally, when I could afford it," he says. A full decade passed between when Hale submitted that high school project to HarperCollins and when his first book, The Devil You Know, was published in 2005. Other books followed, but Hale hadn't met great success. Then he lost the mural painting job. "Everything changed because the big recession hit in 2008," says Hale. "The first things to shut down in state government are museum projects. The museum design place I worked for closed its doors." He did freelance illustration jobs, including regular work with Cricket magazine.

Rapunzel's Revenge was one of the first graphic novels to catch on. Hale found he especially enjoyed doing the research required to make Rapunzel's Revenge and its sequel, Calamity Jack, accurate. "I got excited about making the hats and the guns and the boots just right," he says.

Hale started infusing history into the mini-comics he created for his blog. One about Lewis and Clark generated interest from publishers looking for graphic novels with a history component, and his Nathan Hale's Hazardous Tales series was born. "It took a lot of lucky coincidences from putting my work out there," Hale says. Other topics in the Hazardous Tales series include the Alamo, both World Wars, and the Underground Railroad.

The newest in the series, Major Impossible takes readers along with Powell on his 1869 journey along the Colorado River with a team of nine other men in four boats. "They had no idea what they were going to encounter," says Hale.

"They were going to head down the river and cross their fingers that they wouldn't come across Niagara Falls." Powell actually made two journeys to explore the canyon. "Nobody that went with him on the first trip went on the second trip," says Hale. "They didn't all make it. One guy left early and three of them disappeared. Nobody knows what happened to them."

Hale is already at work on the tenth book in the series, which will be about the Louisiana Purchase. "All I was ever taught about it in school was that Thomas Jefferson got it for a good deal," says Hale. "Not from whom. Not why it was a good deal. And yes, Thomas Jefferson will appear on a few pages. But it's really about the second big revolution in the New World. The first was America vs. Britain. The second was Haiti vs. France." The book will address Napoleon's role in the deal. "He had big plans to develop it as the French base in the New World, but he sold it out of desperation after a major military defeat in Haiti," says Hale. "The people in Haiti, using machetes and gardening tools take down this massive army, with a little help from yellow fever-infected mosquitoes. It's completely insane and so interesting. I thought to myself, Why didn't I hear this story in school?!" 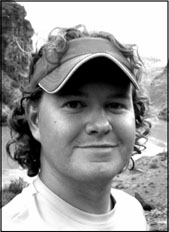 Hale has no shortage of riveting topics for future books. "People always say, 'You make history funny and cool,'" says Hale. "I don't do anything. I put it in cartoon form. That's it. History is fascinating and funny and cool all on its own."

For more information about Nathan Hale and his books, visit nathanhaleauthor.com.