Ice skating is both a pleasant hobby and a competitive sport. Ice skaters glide across ice wearing skates—shoes or boots with metal blades attached to the bottom. People skate for fun both outdoors and indoors. They skate on all kinds of ice surfaces, from a small frozen pond to a large indoor arena.

Competitive skating consists of two sports: figure skating and speed skating. Both are events at the Winter Olympic Games. Figure skaters also perform in ice shows around the world. The team sport of ice hockey involves skating as well. Ice hockey is played in schools, in professional leagues, and at the Olympics.

There are three basic types of ice skates: figure skates, speed skates, and hockey skates. Figure skates are the best type of skate for pleasure skating. A figure skate has a tall boot that extends above the ankle. The blade on a figure skate is about as long as the boot. Each skate has a toe pick, a jagged-toothed edge at the front of the blade. Figure skaters use toe picks to brace themselves when they leap into the air.

Speed skates are designed for racing. A speed skate has a long blade attached to a low-cut boot.

A hockey skate has a short blade that is curved at the ends. This design allows hockey players to make quick turns at high speed. A hockey boot is hardened to protect the player’s foot.

Figure skaters spin, jump, and dance on the ice. 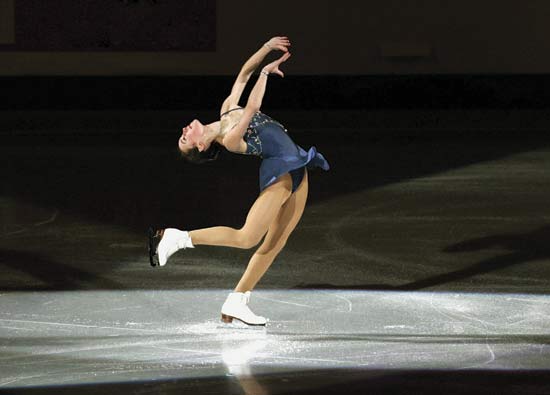 Figure skaters spin, jump, and dance on the ice. Timothy A. Clary—AFP/Getty Images

Figure skaters perform routines that involve jumps, spins, and dance moves. They perform the routines to music. Judges decide the winner in contests of figure skating. The skaters are judged on how well they do their routines. They are also judged on how artistic they are.

Until the 1990s figure skaters were also judged on figures, or patterns, that they had to make with their skates on the ice. This was how figure skating got its name.

Figure skaters compete as individuals or in male and female pairs. Ice dancing is another event that features a man and a woman skating together. It became a separate Olympic event in 1976. Ice dancing is similar to ballroom dancing.

Speed skating and short-track speed skating are racing events. Speed skating has been an Olympic sport since 1924. Short-track races were first held at the 1992 Olympics. Speed skaters race two at a time around a track, but they do not race each other. Instead, after all the competitors have skated, the skater with the fastest time wins. Short-track racers compete against each other. Several skaters race around a short track in a high-speed dash to the finish line. Teams of four compete in short-track relay races. The teammates take turns racing around the track. 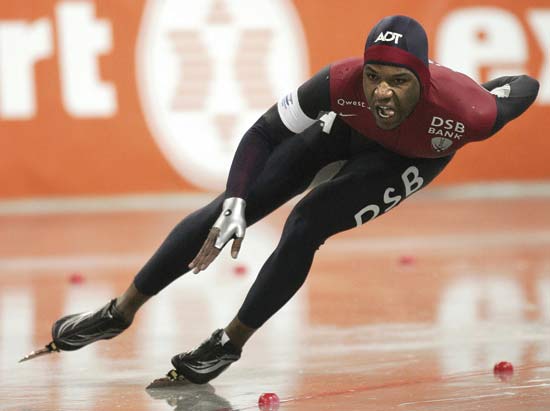 Ice skating probably started in northern Europe as early as 1000 bc. The first skates were made from the bones of elk, oxen, reindeer, and other animals. Skating became especially popular in the Netherlands, which has many artificial waterways called canals. In the winter skaters used the canals to get from place to place. Skating on frozen ponds was popular in England during the 1600s. The English later introduced skating to North America.