All Shoshone had several ceremonies. Major dances included the Round Dance, The Father Dance, and the Sun Dance. The Round Dance was done when food was plentiful or as part of a yearly mourning ceremony. The Father Dance honored the Creator and asked for good health. The Sun Dance was done after a buffalo hunt. The head of a buffalo was prepared so that it seemed to be alive. Today, a mounted buffalo head is used. The Sun Dance shows unity and renews ties to spiritual life. 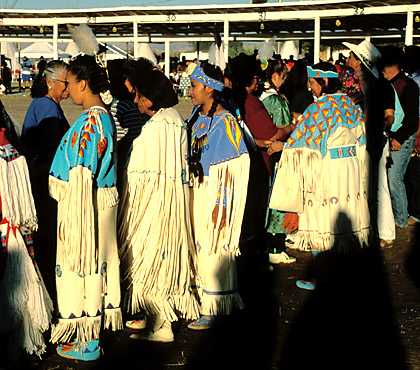 Ceremonial dances, such as the Round Dace, were an important part of Shoshone culture.
Marilyn "Angel" Wynn/Nativestock.com

Today, the Shoshone hold fandangos (festivals that include prayers and games) and powwows. The powwow—a traditional song-and-dance celebration—only came to the Shoshone in 1957. 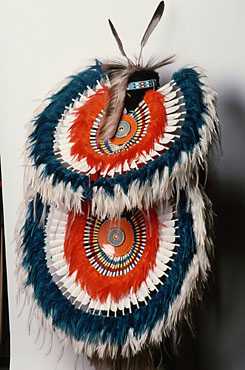 Coyote Wants to be Chief

The Shoshone have many tales of Coyote, a trickster who created people. Coyote is a main character in many tales of western tribes. 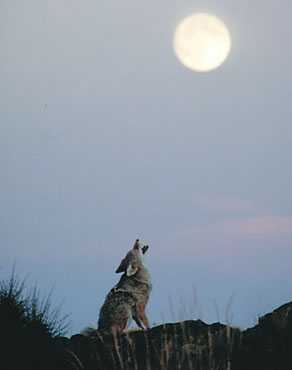 Tales about the Coyote, the trickster, were popular among the Shoshone.
Corel Corporation.

People from all over the country—all kinds of animals, even Stink Bug—gathered together in a valley for a council. Rumors were going around that a lot of them wanted to make Coyote the head man. Meadowlark told Coyote that Coyote was going to be a great chief. As he was going along, Coyote met Skunk, who told him the same thing, that Coyote was going to be the biggest chief there ever was. Then Coyote met Badger and he said the same thing. Every time Coyote heard this he got so swelled and he wished he would meet some more people who would tell him the same things.

Coyote wanted to find [Wolf] his brother. Wolf had been away for a long time. Coyote ran around that valley so fast, looking for Wolf, that he got all tired out.

The council was to start before the sun came up. Coyote didn't sleep the night before, [so] he was so weary. In the middle of the night Coyote got sleepy. He still had a long way to go to get to the council. Coyote sat down to rest a little while in some timber. He didn't want to go to sleep but he was very weary. His eyes began to close. He picked up some little yellow flowers and propped his eyelids open with them. He fought sleep but he was so tired. Finally he fell asleep and didn't wake up till noon the next day. He got up and ran toward the valley. To his surprise he began meeting people. They were coming back from the council. He started asking, “What did you talk about? Who became a chief?” And they all told him, “Your brother did. He is the biggest man in the country now. He is the chief.”

The Eastern Shoshone had military societies called the Yellow Brows and the Logs. Yellow Brows went through an interesting initiation ritual. In it, all speech was backward. For example, “yes” meant “no.” The young men painted their hair yellow and promised to be fearless. They vowed not to give up even if they faced certain death. Logs were older soldiers. They painted their faces black.

Most couples met at Round Dances. Some men, however, kidnapped their brides—and did not care if the women were single or married. Good hunters were sought as husbands. They often had more than one wife. Divorce was common and people often remarried.

The role of women

In early times, Shoshone women were seen as inferior to men. As women grew older, there were ways to raise their standing in the group. They could heal people, help at births, or show skill at gambling. Shoshone women were respected more by Europeans because they were often go-betweens for trappers and traders.

Some Shoshone wrapped their dead in blankets and placed them in rock crevices. They believed the souls of the dead went to the lands of Coyote or Wolf. Mourners cut their hair and destroyed the dead person's property, horse, and tepee. The ghosts of the dead were feared. It was considered a bad sign even to dream about someone who had died.

The Western Shoshone continue to have land claim struggles with the government. They reject offers of money. Instead, they hope to win back some of the 22 million acres they have lost since the 19th century. In 1972, the Shoshone joined with a group called the American Indian Movement (AIM) in a political demonstration. Five hundred Indians went to Washington, D.C., to protest government policies.

Washakie (c. 1804–1900) was a chief of the Eastern Shoshone. In the 1820s and 1830s, Washakie and the Shoshone were on good terms with whites. Washakie signed the Treaty of Fort Bridger in 1863, which promised travelers safe passage through his band's lands. His good relations with the U.S. government helped the Eastern Shoshone get the Wind River Reservation in Wyoming. 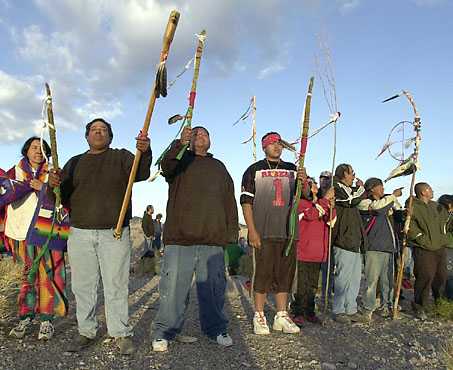 In 2002, Western Shoshone protested against the government's proposal to build a nuclear waste facility on a site they believe to be sacred. Land claims are an ongoing concern for the tribe.
AP/Wide World Photos.

Sacajawea (c. 1784–c. 1812) guided explorers Lewis and Clark on their westward journey. She was part of the Lemhi Shoshone of Idaho and Montana. Around the age of ten, she was kidnapped by the Hidatsa tribe. In 1804, a trader, Toussaint Charbonneau, bought and married her. Charbonneau and Sacajawea joined the Lewis and Clark expedition just before she gave birth to their child. Sacajawea showed the people Lewis and Clark met that their mission was peaceful.

Epidemic:
an outbreak of disease that affects many people
Expedition:
a journey taken for the purpose of discovery or study
Massacre:
a mass killing of a group of people
Reservation:
a plot of land set aside by the United States government for Native Americans.
Shaman:
a priest or priestess who uses magic for the purpose of curing the sick, divining the future, and controlling events.
Timber:
wood
Treaty:
agreement
Tribe:
a group of people who live together in a community
Wickiups:
frame huts covered with brush or bark