A Ute boy was viewed as a man once he proved he could bring in meat. He was not allowed to eat his first kill.

Ute disguised themselves in deerskins when they hunted deer. They wore snowshoes to hunt elk and drove the animals into deep snow before killing them.

The two most important Ute ceremonies were the Sun Dance and the Bear Dance. Both are still done each year. 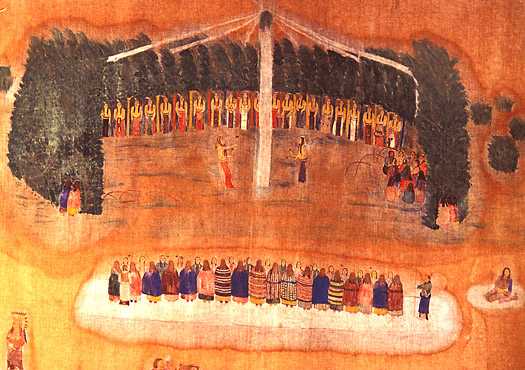 The Sun Dance is a quest by a dancer to get power from the Great Spirit. Each dancer also represents his or her family and community. This makes the dance a way to share culture. The Sun Dance comes from a legend. In it, a man and a woman left the tribe in a time of terrible hunger. On their trip, they met a god who taught them the Sun Dance. After they came back and did the dance with the tribe, a herd of buffalo appeared. The hunger ended.

The Sun Dance ceremony includes several days of secret rituals. This is followed by a public dance done around a special pole, seen as a link to the Creator. Rituals involve fasts and prayers. The Ute also smoke as part of the ceremony.

The Bear Dance takes place every spring. It honors the grizzly bear, which gave the Ute wisdom and taught them to survive. In the early days, the Bear Dance was held at the time when bears came out of hibernation. The dance was meant to wake up the bear so it could help the people find nuts and berries.

The Bear Dance lasted for four days and nights. A large, circle-shaped enclosure was built of sticks. This represented a bear's den. Music was played inside the enclosure to act as the thunder that wakes up the sleeping bears.

One of the issues the Ute deal with today is water rights. The Ute Mountain Ute in Colorado had no safe drinking water on the reservations until the mid-1990s, when part of a $73 million water project was completed. The rest of the project has not yet been funded.

Chief Ouray (c.1833–1880) was a spokesman for the Ute. Born in Taos, New Mexico, he was a shepherd on Mexican ranches during his youth. He moved to Colorado at the age of 18 and became a leader. In 1867, Ouray helped put down a Ute revolt. In 1868, he went to Washington, D.C., as a spokesman for the Ute bands. His work helped the Ute keep 16 million acres of land. In 1872, Ouray again visited Washington. The Ute were pressured to give up 4 million acres in return for a yearly payment of $25,000. In 1880, Ouray went to Washington once more. There, he signed the treaty that moved the White River Ute to the Uintah and Ouray Ute Reservation. Ouray died in 1880. Without his strong voice for their interests, the Ute were moved from Colorado the next year.

Another notable Ute is tribal leader Walkara (1801–1855). He was perhaps the most powerful American Indian leader in the Great Basin area from 1830 until his death.

Bands
groups
Raid
an attack on land or a settlement, usually to steal food and other goods
Reservation
land set aside and given to Native Americans
Ritual
something that is custom or done in a certain way
Tribe
a group of people who live together in a community

Carrier, Jim. West of the Divide: Voices from a Ranch and a Reservation. Golden, Colorado: Fulcrum, 1992.