Navajo society is based on clans (groups of people who have a common ancestor). The original clans were Towering House, Bitterwater, Big Water, and One-who-walks-around. Other clans arose when new groups became part of the Navajo tribe.

Traditional Navajo houses are called hogans. Older hogans were cone-shaped. In the mid-1800s, log cabins with beehive-shaped log roofs became more popular. The roof and walls were often covered with packed earth. A smoke hole was left at the center of the roof. When wood was scarce, hogans were built of stones held together with mud mortar. 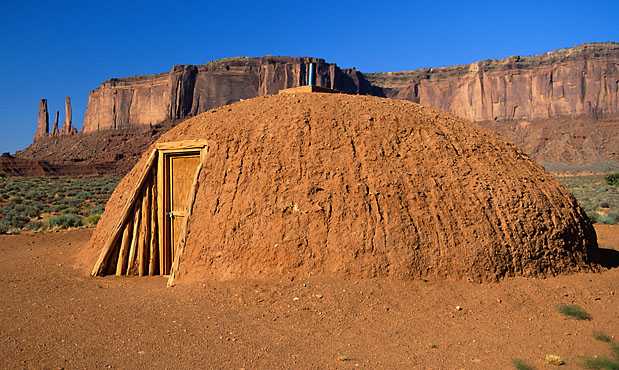 The roof and walls of this hogan are covered with packed earth.
©L. Clarke/Corbis

In recent years, modern cinderblock houses have become more common. Other structures at Navajo homes include corrals made of brush and open-walled work spaces with flat roofs.

Newly built hogans are sprinkled with corn pollen or meal. Prayers are then said to bring the home happiness. Hogan doors must face eastward, toward the rising sun.

Early Navajo men wore breechcloths (flaps of material that cover the front and back and hang from the waist). Navajo also wore leggings, skirts, and blankets woven from the yucca plant or cedar bark, or made of fur. Animal skins were used to make moccasins with braided yucca soles. By the early 17th century, men wore tanned buckskin. Women wore dresses made of fabrics such as wool. By the time of the Long Walk, clothing had become quite colorful.

During the late 19th and early 20th centuries, women wore long, full skirts of cotton with bright blouses. Men wore jeans, colorful shirts, and boots. Their belts were decorated with silver disks, and their headbands were made of rolled kerchiefs. Both men and women traditionally wore their hair long. Their hair was wound into an hourglass shape at the base of the neck.

When they first moved to the Southwest, the Navajo hunted and gathered wild plants for food. They soon learned how to grow crops such as corn, beans, and squash. The Spanish taught them to grow wheat and oats, and to herd sheep and goats. By the time they went to Bosque Redondo, the Navajo often ate sheep meat, corn, frybread (disks of bread fried in hot fat), and coffee with sugar and goat's milk. They also ate mush made from cornmeal or wild seed mixed with water or goat's milk. 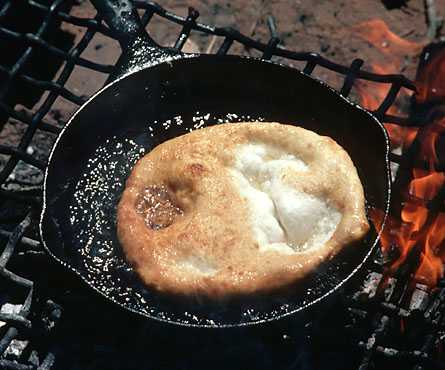 Navajo children watched their parents and other adults to learn life skills. In the 19th century, the Navajo opposed efforts to start white-style schools for their children. They saw the schools as a threat to their way of life. Some children were sent away to boarding schools. There, they were taught to speak and dress like whites.

Today, the Navajo Nation has state schools that serve kindergarten through twelfth grade, as well as several Bureau of Indian Affairs boarding schools.

For the Navajo, sickness is a sign of disharmony. Illnesses can be caused by breaking a social rule, by contact with a ghost, or by a witch's spell.

When a person gets sick, he or she goes to a person called a stargazer or hand trembler. This person determines the cause of the illness. The stargazer then recommends a medicine person known as a Hataali (singer). The Hataali holds a ceremony in which the patient and his or her relatives take part. It may last as many as nine nights and include more than 500 songs. Sometimes there are also dancers who wear masks that stand for certain spirits. The healer may use objects with special powers and medicines made from plants. Most curing rituals are followed by the singing of the “Blessing Way.” This prayer has been called the backbone of the Navajo healing system. As many parts of Navajo culture have broken down, some modern institutions have begun to teach native healing arts. 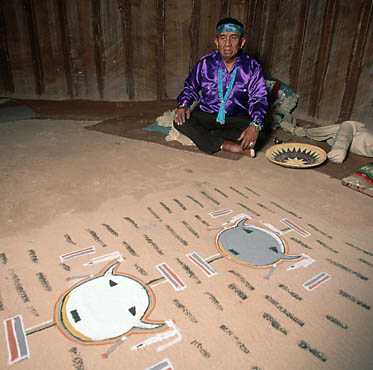 A medicine man uses a sandpainting to try to heal a patient's illness.
© Arne Hodalic/Corbis.

Navajo women have long been known for their excellent pottery. Their pottery included ladles, jars with pointed bottoms, and decorated bowls. They also made coiled baskets, food containers, and water bottles. In addition, they wove rugs and blankets with intricate designs, colored with natural dyes. 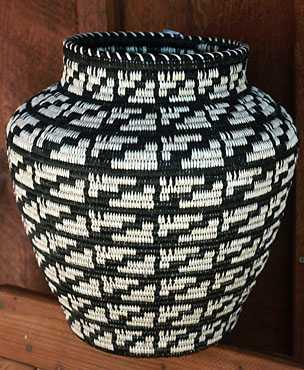 Navajo are skillful at making beautiful coiled baskets. Some of them are woven so tightly that they can hold water.
©Karen Tweedy-Holmes/Corbis

Reservation:
land set aside and given to Native Americans
Ritual:
something that is custom or done in a certain way
Sacred:
highly valued and important
Shaman:
a priest or priestess who uses magic for the purpose of curing the sick, learning the unknown, and controlling events
Tradition:
a custom or an established pattern of behavior
Treaty:
agreement
Tribe:
a group of people who live together in a community