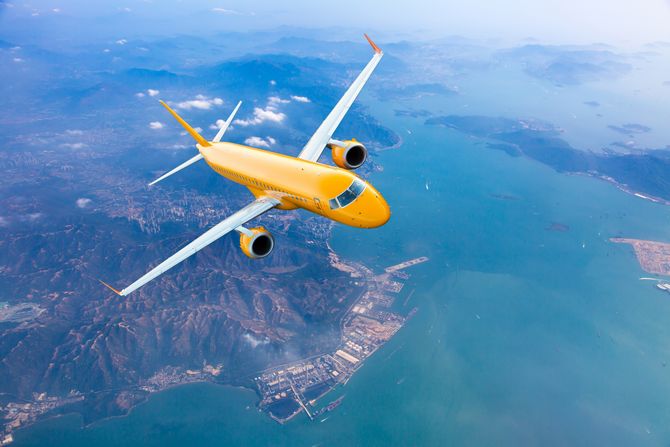 An airplane soars through the sky. © Skycolors

Airplanes, or planes, are a kind of aircraft. They have an engine and wings. Airplanes are heavier than air.

There are many kinds of airplanes. Some carry passengers. Others carry cargo.

The military also has airplanes. Some are fighter jets. They fly very fast.

Some planes are small. People fly them for fun. These planes have a propeller in the front.

Parts of an Airplane

Planes have many parts. Some basic parts are discussed here.

The fuselage is the body of the plane. It has a frame. It is covered in lightweight materials.

The inside of the fuselage is hollow. It carries people or cargo.

The wings have parts. The pilot can move these parts. This changes the amount of force on the wings.

The tail is in the back of the plane. It helps the plane fly. It helps it fly straight.

The landing gear helps the plane land. It reduces shock. This makes the landing smooth.

Planes often have two tires under them. They have a third under the tail.

Smaller planes have one engine. They also have a propeller.

The flight controls make the plane move. They are in the cockpit. The pilot and copilot use the controls.

Gravity makes it hard to fly planes. Gravity is a force. It pulls things toward Earth.

The wings on a plane push air down. But the air pushes up. This creates lift.

Thrust pushes a plane forward. It is created by the engine.

Drag is a force. It slows the plane. Planes are made in a special way. This reduces drag.