ATTACK OF THE WEIRD PLANTS!

Greater crop yields through genetic engineering results from breeds that resist heat, drought, ravaging bugs, and diseases. Among the advances in bug resistance are enhancing a protective gene in Mcintosh apples to fend off Venturia fungi, and the New Leaf potato - engineered with a bacteria gene that is fatal to potato bugs.

Not on their own. Like mechanics working under car hoods, scientists are tinkering with the most basic machinery of plants--genes, the information in every plant cell that instructs a tomato, for example, how to become a perfectly round, small cherry tomato, or a big, juicy beefsteak tomato. By inserting foreign genes from another plant, an insect, or even a bacteria or virus, scientists can alter a tomato's genetic makeup, so it won't freeze, for instance.

Biotechnology or genetic engineering--the altering of a plant's genetic makeup--is causing a revolution in the world's plant chain. Since the early 1980s, scientists have been tweaking plant genes to program crops to resist heat, drought, ravaging bugs, and diseases that claim portions of each year's harvests. Worldwide, 30 percent of crops fall prey to bugs and diseases.

Biotech potatoes, soybeans, and corn have been harvested in the U.S. since 1996. In 1998 alone, 45 million acres of American farmland was planted with seeds of genetically altered crops. Genetic engineering promises greater crop yields, which means more food for the world's exploding population. After all, the United Nations predicts the Earth's population could nearly double in just 52 years from 5.8 billion to 11 billion.

THE WAR AGAINST BUGS

Competing for food against humans are all kinds of insects, bacteria, viruses, and fungi. Herb Aldwinckle, a plant biologist at Cornell University in Geneva, New York, is only one of many scientists fighting back using biotechnology. 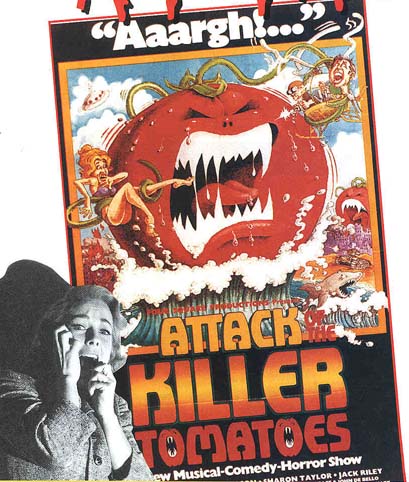 Aldwinckle's mission: to engineer the perfect disease-resistant McIntosh apple. His enemy: a destructive fungi, called Venturia inaequalis (ven-TUR-ee-ya in-uh-KWA-lis) that causes apple scab disease. The fungus leaves nasty-looking black splotches on a McIntosh. The blotchy apple is still edible, but you'd pass on it in a supermarket fruit bin.

Every season, growers spray apple orchards with tons of fungicide (fungus-killing chemicals) to keep Venturia in check. Without the fungicide, nearly every McIntosh apple in New York state would be "chewed up" by the disease, says Aldwinckle. Spraying, while effective and safe for the apple, is extremely expensive for growers and deposits chemicals that easily leach into soil and groundwater.

Aldwinckle's goal: to strengthen McIntosh trees by giving them a protective gene that includes an enzyme (a special protein in cells that causes chemical reaction), called chitinase (KY-tin-ays). Chitinase triggers the cell walls of Venturia to leak so that much of their insides spill out.

Where does the protective gene come from? Aldwinckle uses the Trichoderma (try-koh-DER-muh) fungus, which naturally produces chitinase. He uses a soil bacteria as a carrier into the plant. If the chitinase gene successfully enters a plant cell, every single part of the resulting McIntosh plant--roots, stem, leaves, fruits, seeds--will contain the disease-fighting gene. The plant's offspring will also carry this gene (see "How to Alter a Plant, p. 8).

Like Aldwinckle's apple, other plants are engineered to produce chemicals to repel diseases and bugs. A genetically-engineered potato called New Leaf, for example, contains a gene from a bacteria that's a natural insecticide. One bite of the spud and a potato beetle staggers drunkenly and dies. Potentially harmful chemicals are no longer outside a plant--they're now inside!

Believe it or not, you may have already munched on genetically-engineered fruits and veggies without even knowing it. But so far, nobody in America seems to have become sick from eating biotech foods. Does this mean they're safe to eat? Margaret Mellon, a microbiologist with the Union of Concerned Scientists in Washington, D.C., isn't sure.

Mellon says scientists are moving genes from non-food sources, like fungus or bacteria or viruses, into the food supply. "We have no way of knowing whether the new foods cause allergies," Mellon adds. That's primarily because the foods haven't been around long enough, some scientists say, to be able to test people for allergic reactions. It can take a decade or more for a person to develop such a reaction.

Roughly one-third of the corn and soybean harvest in the U.S. this year resulted from plants altered through biotechnology. Ingredients from corn and soybeans make up a wide variety of everyday foods, from margarine to cereal and soda.

So far, however, no U.S. government agency requires biotech foods to be labeled. The Food and Drug Administration (FDA) doesn't regulate pesticides, which is essentially what's inside Aldwinckle's apples and New Leaf potatoes. In fact, the FDA can't include information about pesticides on food labels.

It's up to the biotech companies who mass-produce most genetically engineered crops--companies such as Monsanto, Dupont, and Pioneer Hi-Bred International--to decide whether an altered food is safe to eat. Some scientists argue not enough is known about genetic engineering to predict what will happen in the future: In addition to the human allergy issue, bugs might grow resistant to chemicals inside the plants. That would mean plants are no longer able to kill invader fungi or other bugs and would need new biotech solutions. More studies need to be done, says biologist Paul Arriola at Elmhurst College in Elmhurst, Illinois, who is calling on the federal government and biotech industry to lead the charge. 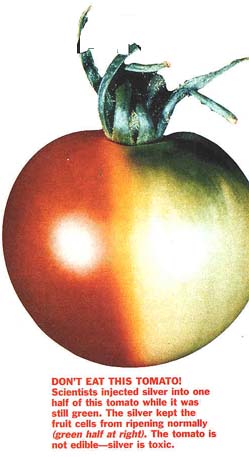 Are you willing to live with the risks until you know all the answers? Or should biotech engineers "leaf" you alone?

RELATED ARTICLE: How to Alter a Plant

To make plants resist insects and diseases, scientists insert new genes into the plants. But they don't start with fully grown plants or fruits. Why? Their goal is to alter the plant's DNA, or basic genetic material, so that the plant can reproduce new, stronger versions of itself. Here's a look at the process.

1. The process requires a common soil bacteria called Agrobacterium tumefaciens. The bacteria has an unusual circular DNA, called plasmid. On its own, Agrobacterium naturally invades plants through cuts in their stems or leaves. Then the bacteria typically transfers a disease-causing gene from its plasmid into the nucleus (center) of a plant cell. That gene might cause a mild disease or create a tumor on the plant.

2. To alter a plant's genetic makeup, scientists remove a plasmid from Agrobacterium and use enzymes (proteins in cells that cause chemical reactions) to cut out the disease-causing gene.

3. Using these same enzymes, scientists cut out the desired gene from the DNA of another organism. That DNA could come from a bacteria, virus, fungus, or even an insect. And the gene may be useful to resist disease, to prevent ugly marks on a fruit, or to repel insects.

4. Scientists then "paste" the new gene to the plasmid using other enzymes, and put the plasmid back into the Agrobacterium. 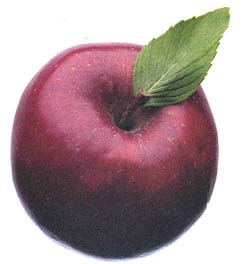 5. Scientists take leaves from the plant they want to alter and crush them. Then they dip the leaves into a solution containing the Agrobacterium bacteria, which now contains the new desired gene. When the bacteria come in contact with plant cells, they make an exact copy of the useful plasmid.

6. The bacteria then injects the new gene into a plant cell's DNA.

7. When the plant cell divides to reproduce, each new cell receives a copy of the new desirable gene.

8. Scientists put the plant cells in a petri dish filled with nutrients that allow the genetically altered cells to grow. 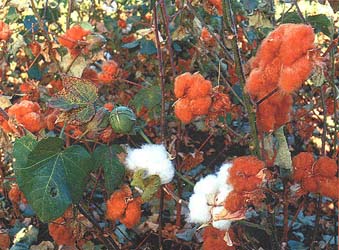 9. In a few months, a fully formed plant grows from the altered cells. Scientists then transfer the plant seedling into a pot.

Most genetically-engineered crops today are designed to ward off insects and fight disease. Soon, however, more exotic biotech plants will be coming to a field near you.

For instance, researchers at DuPont in Wilmington, Delaware, are trying to grow plants that can make plastics and other chemicals that now come from oil, a non-renewable resource.

In Middleton, Wisconsin, scientists al; the biotech company Agrecetus are growing cotton plants that produce cotton bolls containing small amounts of polyester fibers. If the bolls could be coaxed into making more polyester, farms could produce the hybrid fiber that could go into wrinkle-free shirts.

Scientists at Cornell University are working on a project that could save lives--developing bananas, potatoes, and other fruits and vegetables that contain disease-fighting vaccines. Each year, more than 300 million people die of bacteria-induced diarrhea and hepatitis B--ailments that are easily prevented through vaccinations. Many developing countries, however, can't afford to buy, refrigerate, and distribute today's vaccines to their citizens. Edible vaccines are not only cheaper to produce, they don't need to be kept cool. They are also easier to distribute.

TO LABEL OR NOT TO LABEL?

Right now, no label tells you you've just munched on a genetically-engineered apple. Neither the Food and Drug Administration (FDA) nor the Environmental Protection Agency (EPA) requires labels. That has some consumers seeing (tomato) red! Should genetically-altered food be labeled?

NO. I don't think so. Scientists are just making seeds to fight diseases. Apples will still taste natural.

YES. Some people are very picky. But they shouldn't take the foods off the market.

YES. All people have the right to know what they're eating.

ATTACK OF THE WEIRD PLANTS!