Stroll down a supermarket aisle and pick up any of your favorite munchies -- corn chips, soda, ice cream. Sounds good. But how would you feel if you knew these foods contained microscopic bits of fish, or even bacteria? Hard to believe?

Today, nearly 70 percent of processed foods sold in the United States contain ingredients that have been injected with foreign genes, hereditary information in cells that control an organism's growth. The lab technique, gene splicing (see diagram on page 17) lets scientists transplant genes from almost any organism into another. These types of creations are called genetically modified organisms (GMOs). GMOs are in everything from corn flakes to dog chow.

Genetic engineering shows remarkable real-life potential: worm-proof corn or cancer-fighting tomatoes, for example. But genetically modified foods have also ignited a firestorm of protest. Critics warn of unforeseen side effects: allergic reactions in people, environmental damage, and poisoned wildlife. Only about a third of Americans believe that GMOs are safe to eat, according to a recent ABC News survey.

Do we know enough about geneetic engineering to experiment with the world's food supply? Read the pros and cons fueling the GM-food debate -- then make up your own mind. 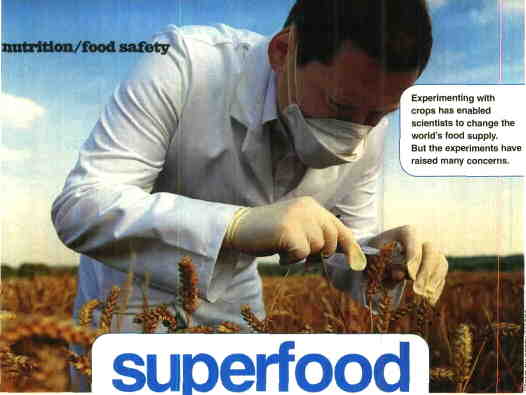 Work is under way to create foods with "built-in" medicines that thwart disease. For instance, scientists at the Boyce Thompson Institute at Cornell University in Ithaca, New York, isolated genes from the hepatitis B virus, an infectious particle that causes deadly liver disease. Then they spliced the virus genes into a banana's DNA to create an edible vaccine, a medicine used to trigger the body's immune system to fight disease, "After you eat the banana, your body produces antibodies (germ-fighting molecules) against the virus," says Sarah Ward, a biologist at Colorado State University in Fort Collins, Colorado.

In poor countries, 500,000 children go blind every year because their diets don't have enough Vitamin K. Scientists are fighting this problem with a new crop called golden rice. Golden rice contains a daffodil gene that provides Vitamin K and helps kids grow up with healthy eyes (see diagram on pg. 17).

* GMOs can help feed the hungry. Currently, nearly 800 million people around the globe are either starving or severely malnourished. And their plight will worsen if the world's population soars to 7.6 billion by 2021, as expected. Some experts contend that it will be tough to feed everyone, especially people in poor countries.

GMOs can help. Scientists are creating seeds that yield more food, grow in deserts and salty water, and resist common weeds and insects. Bt corn, a genetically modified plant, is one example. Bt corn has its own insecticide built inside it so the plant is automatically protected against insects. "Farming is hard work," says Leah Porter, executive director of the American Crop Protection Association. "Biotechnology allows farmers to be more efficient by giving them the tools to grow their crops more effectively."

* GMOs are tested before they're put on the market. Each new GMO is carefully tested by the company that develops it. Then the government steps in. Three different federal agencies -- the Food and Drug Administration (FDA), the Environmental Protection Agency (EPA), and the Department of Agriculture -- study all GMOs created by private companies. A GMO can end up in a supermarket only if it has been approved by the government. And the approval process is not short. The average review period before a GMO product is brought to the market is to 10 years, according to the American Crop Protection Association. 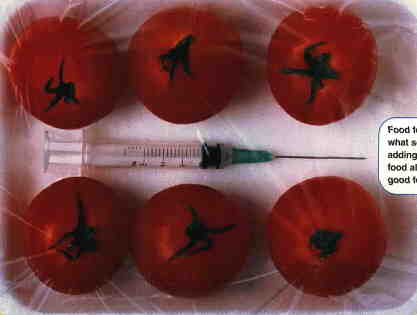 * GMOs can be harmful to people. Scientists claim that genetic engineeering can remove genes from foods that cause severe allergies. Many people, for instance, get sick or die when they eat foods that contain peanuts. Scientists have identified the gene that causes peanut allergies, and they're working on a way to take it out of peanuts.

But critics claim that some GM foods may contribute to allergic reactions to food. Millions of people live with allergic reactions to foods such as nuts, fish, and milk. An allergy attack can cause rashes, asthma, and seizures. "With GM food, we're adding proteins (chemical compounds essential for body growth and repair) from a lot of organisms that we don't eat, like petunias and bacteria, which could spark unknown allergies," says Jane Rissler, staff scientist at the Union of Concerned Scientists. "And we can't trace the allergy source because GM food is not yet labeled."

* GMOs may hurt the environment. Researchers at Cornell University discovered that Monarch butterfly caterpillars died when They ate plants dusted with the pollen of Bt corn that was growing in nearby fields. Scientists also worry that with so much insecticide in the corn plants, insects might develop a resistance to it. Soon, they fear, the insecticide may not kill the bugs anymore.

* GMOs may bring big surprises. When scientists put a gene into an organism, creating a new plant or animal, it's pretty much a shot in the dark. They have no way of telling exactly where the new gene will land. This can cause problems. Before the arrival of the genetically engineered sheep Dolly, for instance, many other genetically modified sheep were born with severe deformities. Another botched experiment happened when scientists placed genes for the color red in petunia plants. The genes not only changed the color of the flowers, but also altered the way the roots and stems grew. And then there was the time that a gene designed to enlarge salmon also turned the fish green!

* GMOs won't feed the hungry. Critics worry that GM foods may eventually diminish the world's food supply. One problem: gene flow, which means that wind-blown or animal-carried GM pollen may contaminate plants, like weeds, which can grow rampant.

Sarah Ward is researching a type of GM wheat resistant to the commercial weed killer Roundup. "The idea is to kill the weeds, rot the wheat," she says. "But the problem is that GM wheat can cross-pollinate, or mate, with a closely related weed." The results could prove disastrous: If the weed incorporates GM wheat's pesticide-resistant gene into its own DNA, making it immune to Roundup, the weed potentially could overrun healthy wheat crops.

RELATED ARTICLE: how to put a vitamin in rice 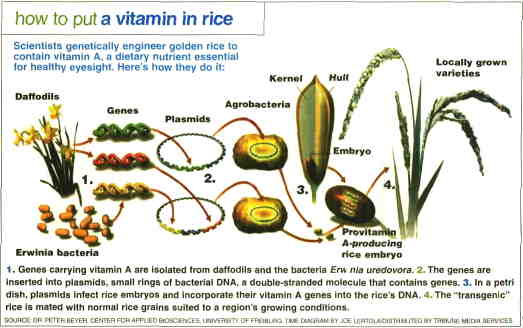 Scientists genetically engineer golden rice to contain vitamin A, a dietary nutrient essential for healthy eyesight. Here's how they do it:

1. Genes carrying vitamin A are isolated from daffodils and the bacteria Erwinia uredovora. 2. The genes are inserted into plasmids, small rings of bacterial DNA, a double-stranded molecule that contains genes. 3. In a petri dish, plasmids infect rice embryos and incorporate their vitamin A genes into the rice's DNA. 4. The "transgenic" rice is mated with normal rice grains suited to a region's growing conditions.