Amazon's plans to increase its minimum wage to $15 per hour will heat up the competition to hire workers in an already tight labor market, say those familiar with central Indiana's logistics industry.

But some local non-Amazon employers say they have strategies of their own for attracting and retaining workers.

On Oct. 2, Amazon announced that the new minimum wage will go into effect Nov. 1 for all its full-time, part-time, temporary and seasonal U.S. employees, including those hired by outside employment agencies. Amazon says the change will affect more than 250,000 employees as well as the 100,000-plus workers who will be hired as seasonal holiday help this year.

Higher wages at Amazon will make it tougher for other local employers to find workers, said Christina Powell, branch manager for the Indianapolis West office of logistics staffing agency ProLogistix.

"It's going to cause other companies to sweat," Powell said--and she includes ProLogistix in that group.

Powell said she currently has about 350 general-labor warehouse jobs to fill and another 100 or so forklift-operator jobs. The general labor jobs generally pay $12 to $13 per hour, and the forklift jobs pay about $14 per hour.

temporary employees jump ship for higher pay at Amazon. The e-commerce behemoth is not among her clients.

A pay difference of as little as 50 cents per hour can be enough to lure a worker to a new job, Powell said. "It will be absolutely devastating lor us."

In response to Amazon's plans, Powell said ProLogistix will spend more time educating its employees about the advantages it offers. As examples, she said, ProLogistix can offer its employees free online courses and long-term placements with a career path, with the chance to be hired on permanently by the logistics client in just three or four months.

Amazon ranks as the 16th-largest Indiana employer, with 8,500 full-time employees, according to IBJ research. And it might soon get a lot bigger. IBJ reported last month that Greenwood is a finalist for an $80 million Amazon distribution center

that would employ 1,250 full-time workers.

The company operates seven fulfillment or sorting facilities in Indiana, plus a Prime Now hub. Its local operations include two fulfillment centers in Plainfield and one each in Indianapolis and Whitestown.

Amazon's advertised wages for local fulfillment center positions have been in the range of $12.50 to $13.50 per hour. The company had previously told Greenwood officials the facility there would pay an average of $14.65 an hour, including administration and management personnel.

In the bigger picture, Powell said higher Amazon wages will have a ripple effect throughout the areas. Other employers will respond either by raising their own wages or installing automation that reduces their need for human workers, she predicted. "It's going to skew things." 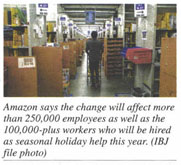 Others aren't sure just how disruptive Amazon's move will be.

"We've seen the wages of the logistics industry increasing over the last few years as the supply of available workforce has gotten tighter and tighter," said Jeff Pipkin, executive director of the Hendricks County Economic Development Partnership.

Hendricks County--Plainfield in particular--is a local hot spot for logistics and warehousing jobs. Pipkin said many employers offer starting pay of "at least $13 an hour" already.

Logistics employers are ramping up hiring for the holiday season, and Pipkin

said most companies offer premium pay for seasonal workers. That might blunt the immediate impact of Amazon's new $15 minimum wage.

"We might not see the effects of it until after February," he said.

Employers have also been coming up with non-wage ways to make themselves more appealing tojob seekers, Pipkin said. Some offer leadership and management training for employees or advancement tracks for the career-minded. Employers are also offering flexible scheduling as a recruitment tool.

John Sell, vice president of retail and transportation solutions at Plainfield-based MD Logistics, said his company was "not surprised in the least" by Amazon's announcement, especially given the tight labor market and booming economy.

MD Logistics has made "quite a few adjustments" to its wage rates over the past few years, Sell said, though he declined to reveal the company's starting pay rate.

The company has also been creative with other offerings, including bonus programs and consistent work schedules.

"Certainly, we have found in our experience over the years that offering our employees a good work/life balance is important," Sell said.

The company has seen success in attracting and retaining quality employees, which he said is evidence that its efforts are paying off.