Our zombies, ourselves: why we can't get the undead off our brains

THE MOST SURPRISING thing about the modern zombie--indeed, the only surprising thing about the modern zombie--is that he took so long to arrive. His slowness is a proverb, of course: his museumgoer's shuffle, his hospital plod. Plus he's a wobbler: the shortest path between two points is seldom the one he takes. Nonetheless, given all that had been going on, we might reasonably have expected the first modern zombies to start showing up around 1919. Twentieth-century man was already moaning and scratching his head; shambling along with bits falling off him; desensitized, industrialized, hollowed out, metaphysically evacuated--A crowd flowed over London Bridge, so many ... Had some trash visionary produced a novel or play about the brain-eating hordes, or avers libre epic of viral undeadness, it would have gone down rather well, at this point. And yet not until 1968, at the dawning of the Age of Aquarius, did the zombie as we know him really make the scene.

Look: there he is, out of focus and deep in the shot, in the fifth minute of George A. Romero's Night of the Living Dead. He's wandering through a cemetery, wearing a shabby blazer, with the air of a distracted groundskeeper. In the foreground are two soberly dressed young people, Barbara and Johnny. They are visiting their father's grave. Barbara kneels and bows her head, but Johnny's a scoffer. "Hey, c'mon, Barb--church was this morning, huh? Hey, I mean praying's for church, huh?" Sniffs Barbara: "I haven't seen you in church lately." A breeze rises. Dark, frondy tree limbs wave above them like seaweed in the black-and-white afternoon, and the zombie draws near. He has begun to reel and lurch. He grabs Barbara. There's death in his skin tone, but his face is alive with a kind of stricken fixity. He bashes Johnny against a tombstone. Barbara flees in a car, but wrecks it. And now we really see him, framed disastrously in the skewed rear windshield, advancing toward us at an off-kilter zombie trot. No mistaking the message: the world is out of whack, the car is off the road, here comes the zombie. 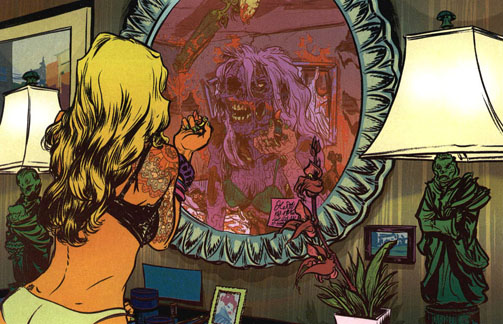 And he's never stopped coming. After fertile decades bumbling in the gore/ horror subbasement, he veered toward the mainstream in the early 2000s and currently enjoys a cultural profile unmatched even by his fancy-pants cousin, the vampire. Sure, we've all enjoyed Twilight, True Blood, vampire love, the pallor and the pangs, etc.--but it's the zombie, Old Reliable, who's really bringing home the bacon. He's the one who rides the best-seller lists and consumes the pop unconscious, whose titles spatter the humor section of your local bookstore: Zombie Haiku, The Zen of Zombie, It's Beginning to Look a Lot Like Zombies: A Book of Zombie Christmas Carols. People, sometimes hundreds of people, go on processional "zombie walks." Video gamers are mowing down fresh multitudes of zombies with a fervor undimmed by habit. And AMC's zombie series, The Walking Dead--the DVD of which is released this month--was the surprise cable smash of last year. Are we approaching, have we already reached, a zombie saturation point, or "burnout," as Max Brooks, author of the (very good) 2006 zombie novel Worm War Z, has put it? I say no. The zombie keeps on: it's what he does.

His origins, we learn--we who dabble in the recklessly expanding field of zombie studies--are in Caribbean folk nightmare. For the people of Haiti, the zombi was one who had died and been buried, only to be malignantly revived and enslaved by a sorcerer, or bokor. Look: there's the zombie in 1929, the year William Seabrook published his sensational account of Haitian voodoo lore, The Magic Island. He's working in the cane fields, his eyes like "the eyes of a dead man" but his hands "callused, solid, human." And there he is in 1932, in the Halperin Brothers' White Zombie--his cinematic debut--trudging with alienated obedience behind his dark master (played by Be1a Lugosi). At night he works with other zombies in the sugar mill. The blades of the great thresher groan magnificently, zombificently, as they turn. A zombie falls in. Oh well.

So Romero did not invent the zombie. But he cut him loose: the graveyard zombie in Night of the Living Dead may be punishing Johnny, in the finest horror-flick tradition, for being cheeky on hallowed ground, but he himself is no longer a supernatural figure. No demon or magus possesses him, no enchantment holds him. The zombifier seems to be technology: radioactive contamination from an exploded space probe. Zombiedom runs amok, moving virally through the population. The zombie wants live human flesh, and those still in possession of it are advised, via TV and radio, to barricade themselves indoors. Romero was laying down the new canons of zombiehood: the wobbliness of the zombie, the terrible mobility of the virus, the pockets of survival, the squall of information as the grid collapses.

Severed thus from his heritage, sent freewheeling into postmodernity with nothing to say on his own behalf (because he can't talk, because he's a zombie), our hero would seem to be in a position of great semiotic vulnerability. And so it has proved: all manner of meanings have been and continue to be plastered onto the zombie. Much can be made of him, because he makes so little of himself. He is the consumer, the mob, the Other, the proletariat, the weight of life, the dead soul. He is too many e-mails in your inbox, a kind of cosmic spam. He is everything rejected and inexpugnable. He comes back, he comes back, feebly but unstoppably, and as he drags you down, a fatal lethargy overtakes you. What is it, this victim's inanition? We all feel it. One of the great statements of the zombie plague was uttered in 1989 by the Canadian punk band NoMeansNo, with its song "It's Catching Up." "Have you heard the news?" it begins, sardonically, over a ticking mesh of guitar and hi-hat. "The dead walk." The last verse rises to a scream:

None of this is to ignore the plentiful variations that have been worked upon Romero's zombie theme since 1968. Recent years, for example, have given us both the Sprinting or Galloping Zombie of Danny Boyle's 28 Days Later and Zack Snyder's Dawn of the Dead remake, and the Comic-Existential Zombie of Edgar Wright's Shaun of the Dead. In the Boyle/Snyder model, the zombie is wild-eyed and very fast. The virus, too, has been ferally accelerated: now, scant seconds after having your throat ripped out, you stand up snarling and race off in search of prey. Shaun of the Dead is gentler and more profound: here zombiedom seems to germinate through a fog of hangovers, Monday mornings, lapses in conversation. Shaun refuses to become; his job (selling televisions) demeans him; his nice girlfriend wants him to give up smoking and stop spending so much time down the pub. He will not, he cannot, and the dead throng the streets. As the future peters out, the present blooms with zombies.

But sometimes a zombie is just a zombie. Strike that: a zombie is always just a zombie. The blow-'em-all-away success of The Walking Dead is no mystery: the show, and the comic-book series by Robert Kirkman on which it's based, mark a triumphant return to zombie orthodoxy, to the non-galloping zombie and his icons. Once again, and with great gladness, we see shotguns, frantically tuned radios, smoke pillars of apocalypse on the horizon--the full zombie opera. The zombie himself has never looked better, dripping with wounds, full of conviction. With his dangling stethoscope, or his policeman's uniform, or his skateboard, he exhibits the pathos of his ex-personhood. He flaps and sighs. He crookedly advances. He's taking his time. But he'll get there.