World War I, also known as the Great War, was fought between 1914 and 1918, and it set the stage for politics, culture, and economics in the twentieth century. Depending on their area of expertise, historians offer Page 1715  |  Top of Articledifferent reasons for and causes of the war. One thing is for certain: The event that started the war happened in the Balkans, an area encompassing several countries in southeastern Europe.

By 1914 Europe was divided into two opposing camps defined by diplomatic alliances. One alliance was that of Germany, Austria-Hungary, and Italy, called the Triple Alliance. The other was formed between Russia, France, and Great Britain, called the Triple Entente. With Europe divided in this way, full-scale war was not just a possibility but a probability. Any nation of an alliance that had problems with a nation of the opposing alliance had the strength of several militaries and governments behind it.

Serbia and other Balkan states gained their independence in 1878 after nearly five hundred years of Ottoman rule. Nations from both alliances wanted to increase their influence over the Balkans. On June 28, 1914, the Austro-Hungarian archduke Franz Ferdinand (1863–1914) and his wife were assassinated by a Bosnian Serb student while visiting the capital city of Sarajevo in the province of Bosnia and Herzegovina. The student was a member of a group called Young Bosnia that was sponsored by Black Hand, a nationalist group in Serbia (but not supported by the Serbian government). Black Hand provided weapons and explosives to the Young Bosnians.

As a result of the assassination, Austria-Hungary gave Serbia an ultimatum that included five demands. Serbia agreed to all the demands save one. This was enough for Austria-Hungary to declare war on Serbia, which it did. In response, Russia mobilized troops along its Austro-Hungarian border and its German border. Germany, in turn, demanded that Russia remove its troops within twelve hours. When Russia ignored the demand, Germany declared war against Russia. The date was August 1, 1914. Two days later Germany declared war against France, too, because France was an ally of Russia. Throughout the war, the Triple Entente (which eventually included Greece and Romania) was called the Allies , and the Triple Alliance (which eventually included the Ottoman Empire and Bulgaria) was called the Central Powers. Before the war was over, thirty-two countries would join the Allies.

The Great War was the first total war. That is, it was the first to break down the distinction between military forces and the civilian populations of the enemy nations. Never before had war included the use of machine guns, gas attacks, barbed wire, tanks, airplanes, submarines, and battleships. And while soldiers were weary with battle, civilians on the home front provided necessary manpower to make munitions. As battles took over farms and towns, more and more civilians paid with their lives. In all, approximately 13 million European civilians died in World War I.

Never before had the strategy known as trench warfare been used, either. Earlier wars were fought with opposing sides charging at one another with weapons such as bayonets and muskets. With the 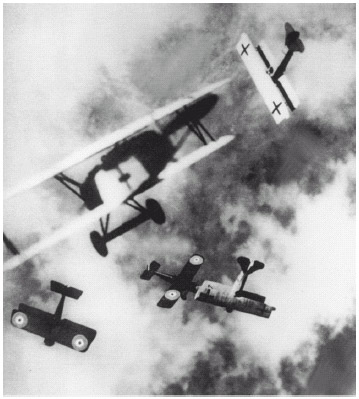 introduction of rapid-firing small arms (firearms intended to be carried), the traditional battle strategy was no longer an option. As a result, troops in World War I dug thousands of miles of trenches—deep ditches into which they could take protection—often fronted with barbed wire.

Although the trenches provided the soldiers with somewhat of a shelter, they made for a slow-moving war. At times, enemies found themselves at a stalemate (complete halt in the action), neither side willing to come out of the trenches and into open battlefields.

Soldiers literally lived in the trenches, which were infested by millions of rats. Both brown and black rats lived side-by-side with the soldiers, and the men feared the brown variety most. These rats lived off human flesh and could grow to reach the size of cats. Given that a single rat could produce up to 900 offspring in one year, the trenches became sites of infection and contaminated food. The rat problem lasted as long as the war, for there was no way to get rid of them.

Rats were not the only source of infection. Trenches were filled with frogs and lice, too. Body lice (insect-like parasites) infected an estimated 97 percent of the men and caused a disease known as trench fever. The disease, which caused severe pain and fevers so high as to cause delirium, was spread by the lice, which sucked the blood of the infected men and carried it to the others. Recovery inside the trenches was impossible, and trench fever was responsible for approximately 15 percent of trench deaths.

Trench foot was a fungus that infected the feet when they got cold and wet and had no chance to dry. Trench conditions were unsanitary at best, and trench foot often led to gangrene (the death of body tissue), which required amputation of the foot.

Perhaps the soldiers became accustomed to it, but visitors to the trenches were appalled by the remarkable stench of the endless ditches. With nowhere to bury the dead, human corpses were left to rot on battlefields. The smell of rotting flesh permeated the air and mixed with the reek of overflowing latrines. Trench foot caused a hideous smell, and the men themselves often went weeks or even months without bathing. Add to this the smell of creosol and chloride of lime—both chemicals used to ward off disease and infection—as well as poisonous gas, and life in the trenches offered about the worst conditions one can imagine. 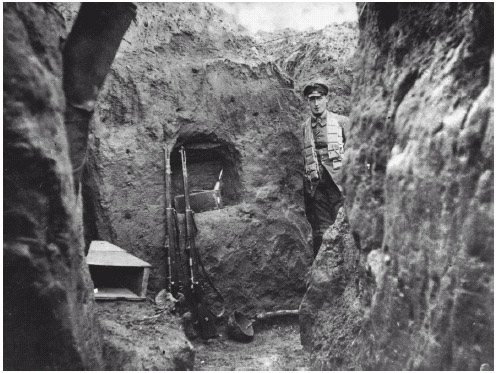 An especially deep German trench in World War I. Trenches provided some shelter during attacks but were also infested with rats, lice, and frogs. HULTON ARCHIVE/GETTY IMAGES

By 1916 both sides were finding it nearly impossible to penetrate the enemy's line. Trench warfare had created a vast no-man's land, that area between enemy trenches that no soldier wanted to try to cross. Battles were a long, slow business and required extreme endurance on the part of the men. A battle at Verdun, France, was fought from 1916 through 1917. Neither the French nor the Germans made much progress, and neither could claim victory: Germany had lost 330,000 lives in that battle; France lost 350,000.

For much of the war, the United States remained neutral and continued trading with both sides. Neutrality became harder to maintain, Page 1719  |  Top of Articlehowever, as American merchant ships were attacked by German fighting boats and continually stopped by British blockades. In May 1915 Germany sank a British passenger ship called the Lusitania . This led to major anti-German feelings in America. In 1917 a telegram sent from Germany to Mexico was intercepted by the British. Germany promised to give Mexico the territories it had lost to America in 1848 if the country would join the Central Powers. After learning of the telegram's content, U.S. president Woodrow Wilson (1856–1924; served 1913–21) declared war on Germany on April 6, 1917.

America enacted the military draft (forced military participation) for World War I. As in other participating countries, those left at home went to work making munitions, and women took over many jobs previously held only by men. Food was rationed, and people were urged to do whatever was necessary to support the war effort. American patriotism was near frenzy as schools discontinued teaching German, orchestras no longer played symphonies written by German composers, and German Americans were relentlessly attacked both physically and verbally.

America's entry into the war marked a major turning point. Russia withdrew from the conflict in the spring of 1918, freeing up German troops to focus on the eastern front. After four years of intense fighting, they were no match for American troops who had yet to fight. Nevertheless, Germany launched a major offensive that spring but was stopped at the Marne River in France. Together with French leadership and soldiers, American troops forced the enemy into continual retreat, forbidding them from even resting in the trenches.

War comes to an end

Central Powers everywhere were collapsing. German civilians held public protests and demonstrations throughout their country. When it became apparent that victory was not within reach and never would be, Germany surrendered. World War I officially ended on November 11, 1918. The Allies had won.

More than nine million people of various nationalities died during the war. One million of them were civilians. Millions more suffered permanent, crippling injuries. So many soldiers returned home with facial disfigurements from poisonous gas attack and bombs that a new branch of medicine was developed: plastic surgery.

President Wilson had proposed a program he called Fourteen Points. The proposal outlined what he believed the Allies should work toward in developing international relations. His program was refused by other Allied forces. In January 1919 representatives from the Central Powers and the Allies met in Paris for a peace conference to decide how to move forward.

Angry and bitter, the European Allies were not willing to work with the Central Powers but instead dictated the terms of the peace agreement. They wanted their enemies punished. Five treaties were developed, one for each Central Power. Each treaty outlined its own terms applicable to that particular country. Every country who formed the Central Powers lost some of its territories and land holdings.

The most significant treaty was called the Treaty of Versailles . Leaders of Germany were invited to sign the peace treaty, but they initially refused because it required them to admit they were guilty of starting a war and to make reparations (repayment) to the countries devastated by the war. Despite the leaders' protestations, they were in no position to refuse. Germany was required to pay $5 billion within two years to European Allies. Two years later, another $28 billion was added to the bill. Germany lost territory as well and was forbidden to build a military or manufacture weapons and war supplies. The treaty also established the League of Nations.

Historians have criticized the treaty as being one based on vengeance, not peace. Its terms forced Germany—which was unable to rebuild itself due to its wartime debt—into further resentment and hatred toward the Allies. Historians generally agree that these feelings ultimately led to World War II (1939–45).