The endocrine system is the human body’s network of glands that produce more than 100 hormones to maintain and regulate basic bodily functions. Hormones are chemical substances carried in the bloodstream to tissues and organs, stimulating them to perform some action. The glands of the endocrine system include the pituitary, pineal, thyroid, parathyroids, thymus, pancreas, adrenals, and ovaries or testes.

Blood sugar
The amount of glucose present in the blood.
Carbohydrate
A molecule made up of carbon, hydrogen, and oxygen atoms that function as food, as energy storage, and as structural molecules of living organisms.
Glucose
A simple sugar made up of carbon, hydrogen, and oxygen broken down in cells to produce energy.
Hormone
A chemical produced by a cell or tissue that sends a message to another part of the body, directing it to act a certain way.
Insulin
A hormone secreted by the pancreas that tells the body's cells to absorb glucose from the blood.
Metabolism
All the chemical processes that take place in the cells of a living organism.
Pancreas
A gland that secretes insulin as well as several other hormones and digestive enzymes.
Plasma
The straw-colored liquid portion of the blood that contains water, proteins, salts, nutrients, hormones, and wastes.

Hormonal Levels in the Blood

Most endocrine hormones are maintained at certain levels in the plasma, the colorless, liquid portion of the blood in which blood cells and other substances are suspended. Receptor cells at set locations throughout the body monitor hormonal levels. If the level is too high or too low, the gland responsible for its production is notified and acts to correct the situation. Most hormones have this type of regulatory control. However, a few hormones operate on a system whereby high levels of the particular hormone activate the release of another hormone. The end result is usually that the second hormone will eventually decrease the production of the initial hormone.

The pituitary gland has long been called the master gland because it regulates many other endocrine glands. It secretes multiple hormones that, in turn, trigger the release of other hormones from other endocrine sites. The pituitary is located at the base of the brain behind the nose and is separated into two distinct lobes, the anterior pituitary (AP) and the posterior pituitary (PP). The entire pituitary hangs by a thin piece of tissue, called the pituitary stalk, beneath the hypothalamus (the region of the brain controlling temperature, hunger, and thirst).

The pineal gland or body is a small cone-shaped gland believed to function as a body clock. The pineal is located deep in the rear portion of the brain. It secretes the hormone melatonin, which fluctuates on a daily basis with levels highest at night. Scientists are not quite sure of the role of melatonin. Some believe it plays a role in the development of the male and female sex glands.

The thyroid is a butterfly-shaped gland that wraps around the front and sides of the trachea, or windpipe. The thyroid is divided into two lobes connected by a band of tissue called the isthmus. Thyroid hormones play several important roles in growth, development, and metabolism, the physiological processes by which an organism maintains life. The major hormones produced by the thyroid are thyroxine and calcitonin. Thyroxine controls the metabolic rate of most cells in the body, while calcitonin maintains proper calcium levels in the body.

The parathyroids are four pea-sized glands located behind the thyroid gland. These glands secrete parathormone, which regulates calcium and phosphate levels in the body. Calcium has numerous important bodily functions. It makes up 2 to 3 percent of the weight of the average adult. Roughly 99 percent of the calcium in the body is contained in the bones. Calcium also plays a pivotal role in muscle contraction.

The thymus is located in the upper part of the chest underneath the breastbone. In infants, the thymus is quite large. It continues to grow until puberty, when it begins to shrink. The size of the thymus in most adults is very small. Like some other endocrine glands, the thymus has two lobes connected by a stalk. The thymus secretes several hormones that promote the development of the body’s immune system.

The pancreas is a large gland situated below and behind the stomach in?the lower abdomen. The pancreas secretes pancreatic juice into the duodenum (the first section of the small intestine) through the pancreatic duct. The digestive enzymes in this juice help break down carbohydrates, fats, and proteins.

Scattered among the cells that produce pancreatic juice are small groups of endocrine cells. These are called the islets of Langerhans. They secrete two hormones, insulin and glucagon, which maintain blood sugar (glucose) levels.

Insulin is secreted in response to high glucose levels in the blood. It lowers sugar levels in the blood by increasing the uptake of glucose into the tissues. Glucagon has the opposite effect. It causes the liver to transform the glycogen (a carbohydrate) it stores into glucose, which is then released into the blood.

There are two adrenal glands, one on top of each kidney. The adrenals are divided into two distinct regions: the cortex (outer layer) and the medulla (inner layer). The cortex makes up about 80 percent of each adrenal. The adrenals help the body adapt to stressful situations. 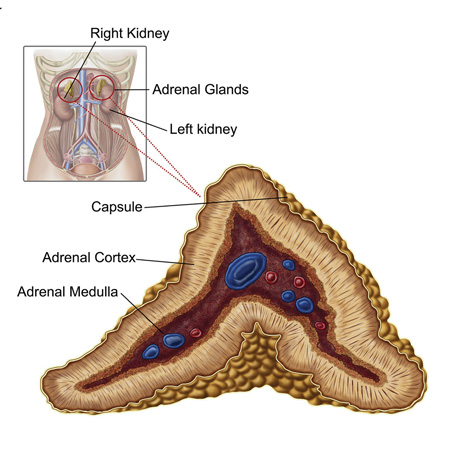 The medulla secretes the hormones adrenaline and noradrenaline. Both of these hormones are released during dangerous or stressful situations. They increase heart rate, blood pressure, blood flow to the muscles, blood sugar levels, and other processes that prepare a body for vigorous action, such as those encountered in an emergency.

In females, the ovaries are located at the end of each fallopian tube and are attached to the uterus by an ovarian ligament. They produce the female reproductive hormones estrogen and progesterone. These hormones work together with the gonadotropic hormones from the pituitary to ensure fertility. They are also important for the development of sexual characteristics during puberty.

Each month after puberty, increased levels of estrogen signal the pituitary gland to secrete luteinizing hormone (LH; a gonadotropic hormone). Once LH is secreted, the ovaries release a single egg in a process called ovulation. While an egg travels down the fallopian tube, progesterone is released, which prevents another egg from beginning to mature. The egg then attaches to the lining of the uterus. If fertilization does not occur, the egg and the lining of the uterus are shed outside the body during the monthly process called menstruation.

During pregnancy, high levels of estrogen and progesterone prevent another egg from maturing. In addition, progesterone prevents the uterus from contracting so that the developing embryo is not disturbed, and helps to prepare breasts for lactation, the formation and secretion of milk.

At menopause, which usually occurs between the ages of 45 and 55, estrogen levels fall dramatically and the monthly cycle of ovulation and menstruation comes to an end.

The two testes in males are located in the scrotum, which hangs between the legs behind the penis. In addition to producing sperm, the testes produce testosterone, the principal male sex hormone. At puberty, increased levels of testosterone bring about the development of sexual characteristics including genital growth, facial hair, and a deeper voice. Testosterone helps sperm to mature and aids in muscular development. After about the age of 40, testosterone levels gradually decline.

As much as 10 percent of the population will experience some endocrine disorder in their lifetime. Most endocrine disorders are caused by an increased or decreased level of particular hormones. Tumors (abnormal tissue growth) in endocrine glands are one of the major causes of hormone overproduction. Hormone underproduction is often due to defective receptor cells, which fail to notify an endocrine gland when productive of its particular hormone is too low. Injury or disease can also result in low hormone levels.

The overproduction of the growth hormone can cause giantism, a condition in which a person grows unusually large. Underproduction of the same hormone can lead to the opposite condition, dwarfism. A similar disorder, cretinism, occurs when the thyroid does not produce enough calcitonin, which is necessary for bone growth. Addison’s disease is a rare condition caused by insufficient hormone production by the adrenal cortex. It is characterized by extreme weakness, low blood pressure, and darkening of the skin and mucous membranes. Low insulin production by the islets of Langerhans can result in diabetes mellitus, a condition marked by excessive thirst, urination, and fatigue. If left untreated, diabetes can cause death.