Respiration is the process by which living organisms take in oxygen and release carbon dioxide. The human respiratory system, working in conjunction with the circulatory system, supplies oxygen to the body's cells, removing carbon dioxide in the process. The exchange of these gases occurs across cell membranes both in the lungs (external respiration) and in the body tissues (internal respiration). Breathing, or pulmonary ventilation, describes the process of inhaling and exhaling air. The human respiratory system consists of the respiratory tract and the lungs.

Bronchi
The two main airway tubes that branch off from the windpipe and lead to the lungs.
Bronchiole
Any of the smaller airway tubes that branch off from the bronchi.
Diaphragm
A dome-shaped sheet of muscle below the lungs that contracts and expands to force air in and out of them.
Epiglottis
Flap of elastic cartilage covering the larynx that allows air to pass through the trachea while keeping solids and liquids out.

The nose has openings to the outside that allow air to enter. Hairs inside the nose trap dirt and keep it out of the respiratory tract. The external nose leads to a large cavity within the skull, the nasal cavity. This cavity is lined with mucous membrane and fine hairs called cilia. Mucus moistens the incoming air and traps dust. The cilia move pieces of the mucus with its trapped particles to the throat, where it is spit out or swallowed. Stomach acids destroy bacteria in swallowed mucus. Blood vessels in the nose and nasal cavity release heat and warm the entering air.

Air leaves the nasal cavity and enters the pharynx. From there it passes into the larynx, which is supported by a framework of cartilage (tough, white connective tissue). The larynx is covered by the epiglottis, a flap of elastic cartilage that moves up and down like a trap door. The epiglottis stays open during breathing, but closes during swallowing. This valve mechanism keeps solid particles (food) and liquids out of the trachea. If something other than air enters the trachea, it is expelled through automatic coughing.

Air enters the trachea in the neck. Mucous membrane lines the trachea, and c-shaped cartilage rings reinforce its walls. Elastic fibers in the trachea walls allow the airways to expand and contract during breathing, while the cartilage rings prevent them from collapsing. The trachea divides behind the sternum (breastbone) to form a left and right branch, called bronchi (pronounced BRONG-key), each entering a lung. 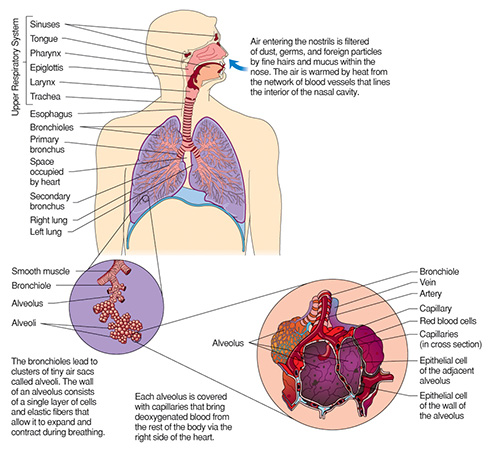 The lungs are two cone-shaped organs located in the chest or thoracic cavity. The heart separates them. The right lung is somewhat larger than the left. A sac, called the pleura, surrounds and protects the lungs. One layer of the pleura attaches to the wall of the thoracic cavity, and the other layer encloses the lungs. A fluid between the two membrane layers reduces friction and allows smooth movement of the lungs during breathing.

The lungs are divided into lobes, each one of which receives its own bronchial branch. Inside the lungs, the bronchi subdivide repeatedly into smaller airways. Eventually they form tiny branches called terminal bronchioles. Terminal bronchioles have a diameter of about 0.02 inch (0.5 millimeter). This branching network within the lungs is called the bronchial tree.

The terminal bronchioles enter cup-shaped air sacs called alveoli (pronounced al-VEE-o-leye). The average person has about 700 million gas-filled alveoli in the lungs. These provide an enormous surface area for gas exchange. A network of capillaries (tiny blood vessels) surrounds each alveolus (the singular of alveoli). As blood passes through these vessels and air fills the alveoli, the exchange of gases takes place: Oxygen passes from the alveoli into the capillaries while carbon dioxide passes from the capillaries into the alveoli.

Breathing exchanges gases between the outside air and the alveoli of the lungs. Lung expansion is brought about by two important muscles, the?diaphragm (pronounced DIE-a-fram) and the intercostal muscles. The diaphragm is a dome-shaped sheet of muscle located below the lungs that separates the thoracic and abdominal cavities. The intercostal muscles are located between the ribs.

A healthy adult breathes in and out about 12 times per minute, but this rate changes with exercise and other factors. Total lung capacity is about 12 pints (6 liters). Under normal circumstances, humans inhale and exhale about 1 pint (500 milliliters) of air in each cycle. Only about three-quarters of this air reaches the alveoli. The rest of the air remains in the respiratory tract. Regardless of the volume of air breathed in and out, the lungs always retain about 2.5 pints (1,200 milliliters) of air. This residual air keeps the alveoli and bronchioles partially filled at all times.

The respiratory system is open to airborne microorganisms and outside pollution. Some respiratory disorders are relatively mild and, unfortunately, very familiar. Excess mucus, coughing, and sneezing are all symptoms of the common cold, which is an inflammation of the mucous membrane lining the nose and nasal cavity. Viruses, bacteria, and allergens are among the causes of the common cold.

Since the respiratory lining is continuous, nasal cavity infections often spread. Laryngitis, an inflammation of the vocal cords, results in hoarseness and loss of voice. Viruses, irritating chemicals in the air, and overuse of the voice are causes of laryngitis. 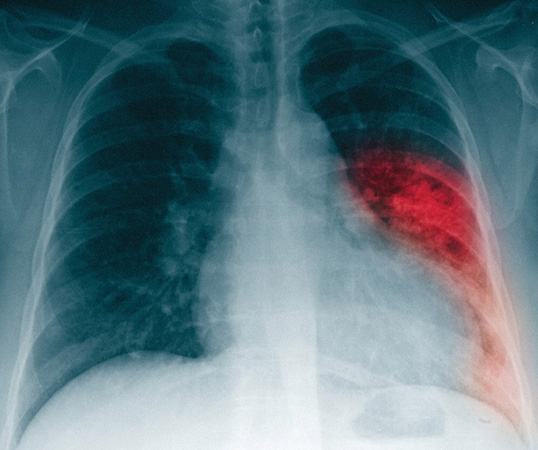 Pneumonia, inflammation of the alveoli, is most commonly caused by bacteria and viruses. During a bout of pneumonia, the inflamed alveoli fill with fluid and dead bacteria (pus). Breathing becomes difficult. Patients develop a fever, chills, and pain, coughing up phlegm and sometimes blood.

In emphysema, also caused by smoking, the walls of the alveoli disintegrate and the alveoli blend together. They form large air pockets from which air cannot escape. This change reduces the surface area available for gas exchange. It becomes difficult for the patient to exhale. The extra work of exhaling over several years can cause the chest to enlarge and become barrel-shaped. The body is unable to repair the damage to the lungs, and the disease can lead to respiratory failure.

Asthma is a disorder of the nervous system. While the cause for the condition is unknown, it is known that allergies can trigger an asthma attack. Nerve messages cause extreme muscle spasms in the lungs that either narrow or close the bronchioles. A tightness is felt in the chest and breathing becomes difficult. Asthma attacks come and go in irregular patterns, and they vary in degree of severity.

Lung cancer is the leading cause of cancer death in men in the United States. It is the second leading cause of cancer death (after breast cancer) among U.S. women. Cigarette smoking is the main cause of lung cancer. Air pollution, radioactive minerals, and asbestos also cause lung cancer. The symptoms of the disease include a chronic cough from bronchitis, coughing up blood, shortness of breath, and chest pain. Lung cancer can spread in the lung area. Unchecked, it can spread to other parts of the body.