Between 2000 and 2010, nearly 14 million immigrants entered the country. This was one of the largest immigration waves since 1900. The peak year during that decade was 2006, when 1.26 million immigrants came to America. After 2006 the numbers dropped. This was due to the economic downturn in 2008, which made jobs scarcer. But despite decreased demand for new labor, immigrants continued to enter the country at the rate of over 1 million per year. 1

The ethnic makeup of immigration in the twenty-first century is vastly different than in the past. Before the 1965 Immigration and Nationality Act, 75 percent of the foreign-born population was from Europe. In 2015 only 11 percent of foreign-born U.S. residents were from Europe. The major countries of origin shifted to Mexico, China, and India. In that year, people from Mexico made up the largest share of the foreign-born population, with 27 percent. People from China followed with 2.7 million, and people from India with 2.4 million. The rest of the nation's immigrants were from other countries in Central and South America. 2

Coyote:
Informal term to describe a smuggler of undocumented immigrants across the U.S.–Mexico border.
Multiculturalism:
The presence of several distinct cultural or ethnic groups in a society that maintain their differences from the larger society.
Recession:
A period of temporary economic decline during which there are fewer jobs, lower income, and reduced buying and selling of goods.
Visa:
A document that allows the holder to enter or stay in a country within a specified period of time.

The total population of foreign-born people in the United States in 2015 numbered 43 million. Just under half that number were naturalized citizens. Women account for more than half of all legal immigrants. 3 Many more men than women used to immigrate to the United States. This changed after 1965, when the focus of immigration policy shifted from employment to family reunification under the 1965 Immigration Act. Over half of all immigrants are now admitted based on family ties. Also, immigrants at the time of their arrival are much younger than in the past. The U.S. Census Bureau notes that people between the ages of fifteen and thirty-four are now the largest age group among immigrants.

Discuss major shifts in immigration demographics since 1965. What has changed regarding who comes to the United States?

Undocumented Immigration by the Numbers

Official immigration numbers do not include undocumented immigrants. Many undocumented immigrants come into the country without reporting their entry to federal officials. Others come into the country on a temporary visa but do not leave when it expires. A large portion of undocumented Page 45  |  Top of Articleimmigrants come looking for jobs, many in agriculture. Some people who enter as international travelers simply decide to stay. They find jobs or connect with relatives with legal status. 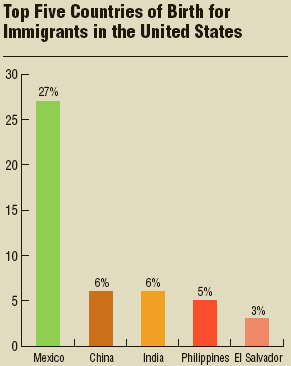 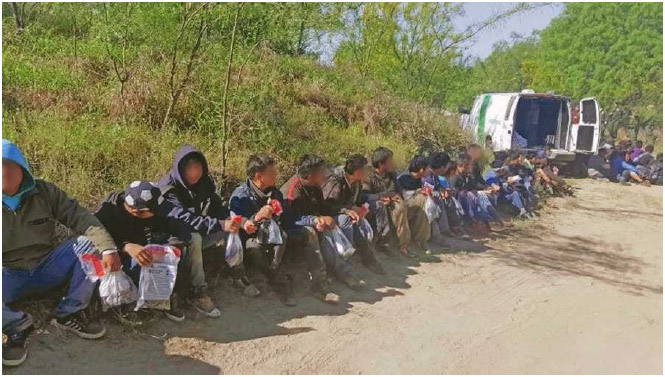 The U.S. Border Patrol is responsible for decreasing the number of undocumented immigrants who enter the country. Increasing security at the U.S.–Mexico border reduces the number of illegal border crossings as well as the amount of violence and crime in nearby areas. But some people feel that the border police aren’t doing enough, and armed private militias are taking it upon themselves to prevent migrants crossing. What are some of the dangers of private militias also patrolling areas of the border?
Sky News/Film Image PartnerGetty Images

The Debate over Undocumented Immigration 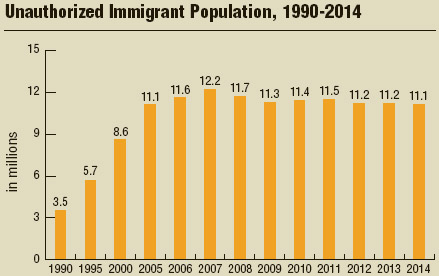 On the other side of this debate are those who want immigration laws to be less strict. Supporters of a more open immigration policy state that undocumented workers make up less than 5 percent of the labor force, and therefore are not taking large numbers of jobs away from Page 48  |  Top of Articlecitizens. They also point out that almost two-thirds of undocumented immigrants have been in the country for at least ten years. “Mexicans are not invading the United States,” said journalist Jorge Ramos in 2017. “The undocumented population has remained stable at about 11 million for the last decade.” 6 In the view of Ramos and others, the undocumented immigrant problem is exaggerated.

People on opposite sides of the immigration debate share a concern about unauthorized immigrants crossing the U.S.–Mexico border. Those who attempt it, including Mexicans and people from Central American countries, face many dangers. Some die of exposure to heat or risk drowning. Others pay high fees to smugglers, known as coyotes, to be taken across the border. Supporters of stricter enforcement believe it can help solve the problem by discouraging people from making the dangerous journey. Supporters of less strict immigration laws believe that allowing more immigrants to enter legally will help solve the problem.

Analyze the effect that undocumented immigrants have on the U.S. economy.

America has been called a melting pot because American society is a blend of its citizens' diverse backgrounds. Immigrants from everywhere in the world came together to make one America. They did so by assimilating, learning English, and adopting American values. As the historian Victor Davis Hanson observes, the melting pot also refers to the process of intermarriage and integration—people Page 49  |  Top of Articleblending together in families and communities. There is growing concern, however, as to whether assimilation is still taking place. “Sometime in the late twentieth century,” Hanson writes, “America largely gave up on … one common culture and opted instead for multiculturalism, in which each particular ethnic group … saw itself as separate from the whole.” 7 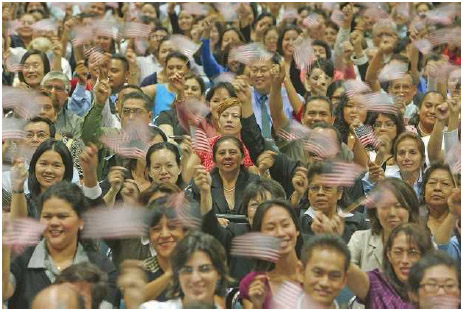 The increased presence of ethnic enclaves, which reflect the immigrants' nations of origin, is sometimes used as evidence of lack of assimilation. Some immigrant groups continue to speak their native languages. They may also tend to spend time with each other rather than with nonimmigrants, and focus on their particular group's concerns. Some thinkers have asked whether America is no longer a melting pot but instead a salad bowl. The salad bowl image suggests that America is an assortment of ingredients tossed together but not blended. Another way to put this is that, instead of having a single culture, we have many cultures, or a multicultural society.

In a multicultural society, immigrants maintain their ethnic identities and heritage without completely assimilating. Some have claimed that assimilation is no longer possible. In 1991 Martha Farnsworth Riche, a demographer (someone who studies population statistics), argued that “we have left the time when the nonwhite, non-Western part of our population could be expected to assimilate to the dominant majority.” She predicted that “in the future, the majority will have to do some assimilation of its own.” 8 In a multicultural America, the “salad dressing” that will hold it all together is U.S. law and the economy. 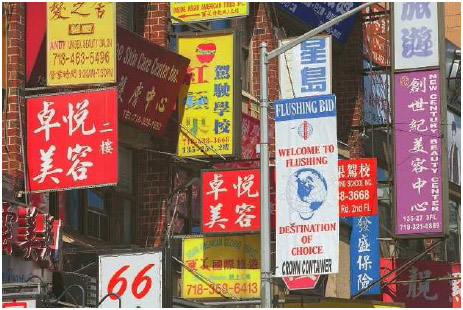 The wave of Hispanic immigration to the United States since the late twentieth century had a major impact on the American scene. Never before in American history had such a large wave of immigrants been dominated by a single ethnic group. Over the years, Hispanic culture has become widespread in the United States. Many entertainers, sports stars, politicians, and business people are of Hispanic descent. Companies are eager Page 51  |  Top of Articleto cater to the large and growing Hispanic market. The growing Hispanic portion of the population has prompted further thinking about assimilation and the melting pot vs. the salad bowl.

“One of the hallmarks of assimilation in America is that immigrants are free to retain or discard as much or as little of their homeland cultures as they wish without compromising their assimilation.”
—Peter Salins, immigration expert.

The issue of immigration has stirred mixed feelings among native-born Americans and naturalized citizens. Historically, citizens have looked more kindly on immigrant groups that have been in the country for a long time. They tend to not trust recent arrivals. This has been true since the late 1800s, when the origins of immigration shifted to southern and eastern Europe. At that time, many Americans thought that Poles, Jews, and Italians were bad for the country. Since the beginning of the Hispanic immigration wave, many Americans have held negative views of arrivals from Latin America. Today, Americans hold more positive views of immigrants from Asia and Europe than from Latin America, the Middle East, or Africa.

Summarize the findings of at least one Gallup poll discussed in this section. Then, state how you would answer if you had been among the people polled in the survey. 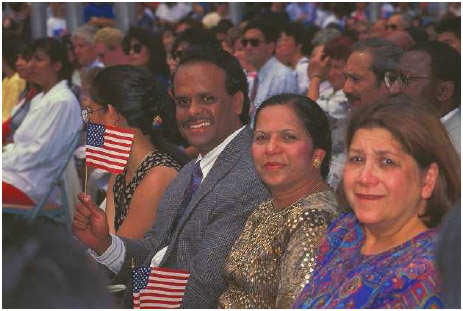 The mixed views Americans hold about immigration make finding agreement difficult. Immigrants have gotten involved in the debate because they have a vested interest in the outcome. Taking part in the democratic process has always been important to immigrants. Immigrants tend to have a higher rate of civic participation than native-born Americans. This is because many immigrants come from nations that do not have democratic freedoms or the ability to vote and take part in community discussions. In the United States, only born or naturalized citizens can legally vote. Any immigrant, however, can take part in public discussions, protests, or gatherings. Policy analyst Michele Wucker points out, “In some cities … immigrants have won the right to vote in certain local elections, particularly for school boards…. Others are educating their fellow immigrants about their rights and responsibilities, and teaching them English.” 11

Hispanics are a politically active group, and a number of elected leaders are of Hispanic descent. In 2017, thirty members of the U.S. House of Representatives and three U.S. senators were Hispanic, representing both political parties. Two state governors were Page 54  |  Top of ArticleHispanic, and there were approximately 240 Hispanic mayors. This was a low representation compared to the size of the Hispanic population. But the number of Hispanics in public office has been growing along with the size of the Hispanic voting bloc.

What the Future May Hold

Immigrants have played a major role in the growth of the U.S. population. The nation's population was 193 million in 1965, the year the Immigration and Nationality Act was passed. By 2015, America was home to 324 million people. Of the 131 million added to the population in that fifty-year period, 72 million are linked directly to immigration. Without immigration, the population would have risen 30 percent instead of 67 percent. The Hispanic share of the population rose from 4 percent in 1965 to 18 percent fifty years later. 13 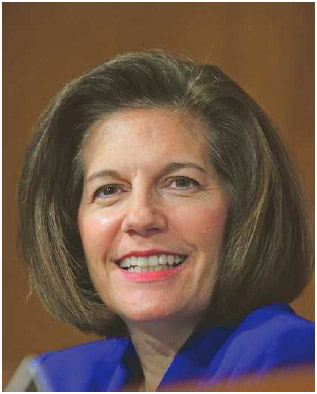 Hispanic Americans are a politically active group, and a number of elected leaders are of Hispanic descent. Nevada senator Catherine Cortez Masto, a Democrat, was elected in 2017. She is the first woman elected to represent Nevada in the Senate and the first Latina in the Senate. DPA PICTURE ALLIANCE/ALAMY STOCK PHOTO DPA PICTURE ALLIANCE/ALAMY STOCK PHOTO

The next fifty years could bring further major changes to the U.S. population. If current trends hold, by 2065 it is estimated that the U.S. population will be 441 million. It is estimated that 88 percent of that increase will be a result of future immigrants. The percentage of whites will drop from the current Page 55  |  Top of Article62 percent to 46 percent of the total. Hispanics will make up 24 percent and Asians 14 percent. This means that by 2065 there will be no clear ethnic or racial majority in America. This will be a major cultural change for a nation that has been mostly white since it was founded. 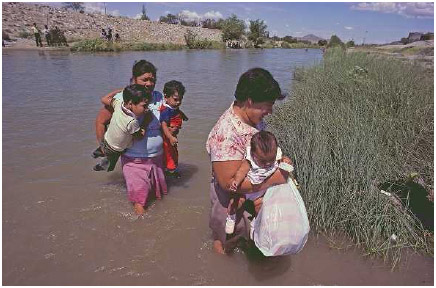 Predictions of the future size and makeup of the U.S. population are based on current trends of growth and immigration. Any number of unforeseen circumstances could change this outcome. It is clear, though, that as long as America remains a destination for immigrants worldwide, it will be a nation that is constantly changing.

11. Wucker, Michele. Lockout: Why America Keeps Getting Immigration Wrong When Our Prosperity Depends on Getting It Right. New York: PublicAffairs, 2006, 228.