Does aid help? The evidence suggests it may do more harm than good

What a scandal for our times. Oxfam, that upholder of modern-day virtue, unassailable in its righteousness, buried for seven years that its aid workers exploited young girls. The men abused their power to have sex with desperate victims of the Haiti earthquake--the very people they were supposed to protect.

Michelle Russell of the Charity Commission is clear about the deception. 'We were categorically told by Oxfam; there were no allegations of abuse of beneficiaries. We are very angry and cross about this.'

Nor was this a one-off. Helen Evans, the charity's global head of safeguarding, begged senior staff, ministers and the Department for International Development to act. She had uncovered sexual abuse allegations both abroad--three in one day--and in Oxfam's charity shops. Nothing was done.

This is the same Oxfam that recently blamed capitalism for world poverty and set up deck chairs in Trafalgar square to protest against corruption and tax havens. Now the virtue signallers are hoisted on the shard of their own fallibility. Compared with the emerging sins of our aid agencies, tax havens look almost benign.

Sadly Oxfam is not alone. Andrew Macleod, former chief operator of the Emerging Coordination Centre, contends paedophiles and 'predatory' sex abusers use the halo of charity work to get close to desperate women and children. 'You have the impunity to do whatever you want. It is endemic across the aid industry and across the world.' He warns the infiltration of the aid industry by paedophiles is on the scale of the Catholic church--if not bigger. The difficult truth is that 'child rape crimes are being inadvertently funded in part by the United Kingdom taxpayer'.

These revelations threaten to extinguish the virtuous glow that has protected the aid industry from scrutiny. We should seize the opportunity. Is the 13.5 billion [pounds sterling] we spend on aid each year doing its job? What is its impact on the countries it is supposed to transform at the local and on the national level?

Until now the aid industry has escaped such examination. It is astonishing to learn that aid effectiveness was not even seen as a priority until 2005. Evaluations still use dubious methods, Jonathan Foreman points out in his excellent report 'Aiding and Abetting' (Civitas 2013). One man recalls being told about a splendid school in a village in Pakistan. He had visited the village the week before. There had been no school.

Most of us would back humanitarian aid and international help when disaster strikes. Few would argue with aid that is there for a specific purpose and ends when that purpose is accomplished. But that is not the same as the open-ended commitment demanded by aid agencies. An Oxfam advert sums up the myth we have been sold: 'Together we can end extreme poverty for good. Will you join in?' Who can resist that exhortation? Who wants to sound like a spoilsport by questioning how much must be spent, for how long and how do we judge the job done?

Dambisa Moyo, a global economist from Zambia, points out the first world has sent more than $1 trillion to Africa over the past 50 years. Far from ending extreme poverty, this fabulous sum promoted it. Between 1970 and 1998, when aid flows to Africa were at their peak, poverty in Africa rose from 11 per cent to a staggering 66 per cent. Of course there are other factors. But in her book Dead Aid, Moyo states, 'Aid has been and continues to be an unmitigated political, economic and humanitarian disaster for most parts of the developing world.' 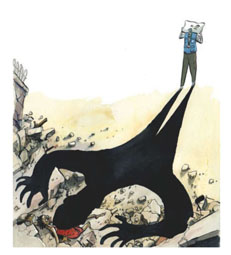 Indeed the more development aid a country receives, the less likely it is to enjoy economic success. In 1957, Ghana boasted a higher per capita GDP than South Korea. Thirty years later, it was lower by a factor of ten --the toxic effect of official development aid being one factor. On the other hand, South Korea, Singapore and Malaysia, the recipients of relatively little aid, flourished. Aid distorts home markets. Food aid, for example, causes agricultural sectors to shrink and makes famine more rather than less likely. As Moyo puts it, in no other sector, business or politics, are such proven failures 'allowed to persist in the face of such stark and unassailable evidence'.

Aid does little to promote peace, security, trade and good governance. If anything, it hinders effective government. The cascade of aid money permits government to abdicate its responsibility to fund health care, education and infrastructure. It promotes a disconnect between a government and its citizens. When foreign donors cover 40 per cent of the operating budgets of countries such as Kenya and Uganda, why would leaders listen to their citizens? Schmoozing foreign donors comes first. As Moyo says, 'Long, long lines of people have stood in the sun to vote for a president who is effectively impotent because of foreign donors or because glamour aid [in the form of Bob Geldof or Bono] has decided to speak on behalf of a continent.'

What Africa needs is not more 'Band Aid solutions' but jobs for the 60 per cent of Africans under the age of 24. 'And aid,' as Moyo says, 'has never created a single job.'

If aid too often fails countries on the national level, what about locally? Surely local projects must be wholly beneficial? The problem is they come with a catch.

When Mary Wakefield wrote about the UN's 'sex for food' scandal, she mentioned the 2006 report by Save the Children into the effect of the aid cavalcade in Liberia. The report is invaluable because it gives the actual recipients of our aid a voice. Mostly we only have the word of the charities.

The welcome distribution of aid, it soon became clear, went hand in hand with increasing numbers of children caught up, as their parents complained, in 'man business'. The (mostly) girls ranged from eight to 18. Levels of desperation in the town and the nearby refugee camp meant 'as soon as they see their "tete" [breasts] coming up then they jump into this man business'. Prostitution had not been common before, and certainly not among children. Teenage pregnancies soared.

All focus groups and individuals interviewed 'without exception mentioned NGO workers'. As one girl said, 'I have been asked more than 20 times by men to go with them for money. All are NGO workers.' The report goes on, 'It is clear that sex with underage girls by humanitarian workers continues openly.' Communities were afraid to report NGO staff, 'as they were concerned that the assistance provided by the NGO might be withdrawn'.

Save the Children noted an alarming trend. 'Communities were increasingly resigned to the fact that sex in exchange for services was another method of survival.' Like those African governments dependent on aid, the adults had lost all self-determination. They were rendered as helpless in the hands of the foreign donor as their politicians.

On Radio 4's Today programme this week, Madeleine Rees, a human rights lawyer, insisted: 'The majority of aid does good.' She went on, 'Who is going to get hurt if the aid budget is destroyed?' Of course, like obedient children, we are meant to reply, 'The poor.' But as more and more stories emerge about waste and abuse, I wonder if aid doesn't do more harm than good.

Caption: 'There goes the neighbourhood.'