COMPLAINTS THAT big-time college football and basketball are professional sports that don't pay their players go back many decades. Unfortunately, the perennial status of such arguments makes it easy to overlook how radically the economics of these games have changed.

The 65 colleges that make up the economic elite of college sports--the members of the so-called Power Five conferences --are awash in an ever-growing torrent of money. Fueled by spiraling television- and licensing-rights fees, these members of the Atlantic Coast Conference, Southeast Conference, Big Ten, Big 12, and Pac-12 saw their athletic-department revenues double in the past 10 years, on the heels of having doubled in the decade before that.

By my calculations, the result of this exponential growth is that the average football or men's basketball player at a major-conference college now generates between $1.5 and $2.3 million in revenue for his college per year. Big-time college football and basketball now produce about $8 billion in annual direct revenue. This is nearly 40 percent more than the entire National Basketball Association (the average NBA player makes $6.2 million).

The direct revenue figures alone are staggering: They represent $1.27 million for every scholarship football and men's basketball player at the Power Five institutions. But direct revenue is just part of the story. The Power Five colleges collectively raised $16.49 billion in gift income in the 2017 fiscal year. How much of that vast sum can be attributed to the extensive good will and considerable publicity college sports generate for these institutions?

The answer is necessarily speculative, but development officers at these colleges, who clearly believe that high-profile sports play a key role in their fund-raising efforts, exploit those factors. For example, the $4-billion fund-raising campaign now concluding at the University of Michigan is titled "Victors for Michigan." "The Victors" is the school fight song.

My estimates regarding the average revenue generated by major-conference football and basketball players are based on varying assumptions, ranging from very conservative to relatively liberal, regarding the effects of big-time college sports on fund raising. Yet even the low-end estimate suggests that, if players were compensated on the model employed by professional sports leagues when they divide revenue, major college football and basketball players should receive an average of $750,000 annually. Note that this figure would still result in these nonprofit--and therefore largely untaxed--universities retaining revenues generated by football and basketball that would equal their entire athletic operating budgets just a decade ago.

Such figures highlight the absurdity of the perennial argument that big-time college athletic departments lose money. For example, four years ago the National Collegiate Athletic Association released a study purporting to show that the average Power Five conference college lost millions of dollars on sports every year, and that only a handful had revenues that exceeded expenses.

What that study really demonstrated is that there is no revenue stream that cannot be outspent by sufficiently determined administrators. Athletic departments still manage to lose money because, among many other reasons, coaching and administrative salaries are now several times larger than they were just a few years ago. 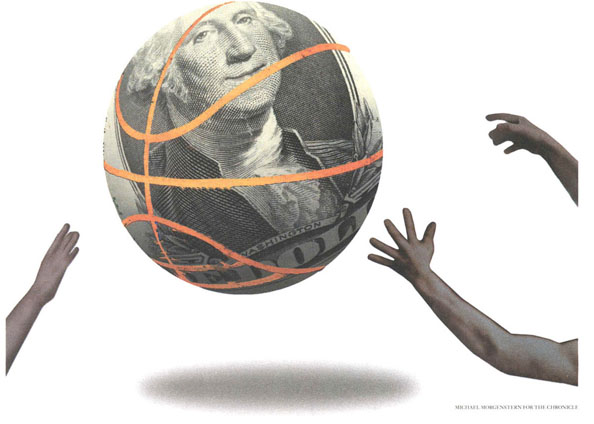 As for administrative compensation, when I was an undergraduate at Michigan in the early 1980s, Don Canham, the university's famed athletic director, was making $54,000 (this is equivalent to about $142,000 in 2018 dollars). Michigan's current athletic director made $920,000 in 2016, a figure that didn't even rank in the top third of Power Five athletic-director salaries.

YET EVEN these stupendous sums for administrators of what are, legally speaking, charitable enterprises, are dwarfed by the compensation now being collected by Power Five conference commissioners. For instance, Jim Delany, commissioner of the Big Ten, is collecting--in addition to his $3.1-million annual salary--$20 million in bonus payments.

All of this highlights the unsavory spectacle of a handful of athletes--the majority of whom are African-American, and many from modest economic backgrounds--subsidizing the increasingly grotesque compensation of the colleges' top managerial class, both inside and outside the athletic department. After all, paying the football coach $6 million a year makes it far easier, for both psychological and political reasons, to pay a college's president $1 million, its provost $600,000, its various vice provosts $400,000, and so on.

As to the argument that nonrevenue sports at Power Five colleges rely on football and basketball money, at the majority of colleges there are no revenue-generating sports. Nevertheless, these institutions have no trouble offering plenty of intercollegiate athletic opportunities to their students. At such colleges, sports actually are what the NCAA still claims big-time college football and basketball are: extra-curricular activities rather than quasi-professional multibillion-dollar operations.

Most Power Five conference colleges have taken every possible step to professionalize football and basketball operations that now garner them collectively billions of dollars a year, except for the one step simple justice demands: paying the players.

Paul Campos is a professor of law at the University of Colorado. He writes often on the finances of higher education.

Caption: MICHAEL MORGENSTERN FOR THE CHRONICLE