Should College Tuition Be Free?

Going to college is very expensive in the United States. Tuition alone at a four-year school can run anywhere from about $10,000 at a state university to more than $40,000 at a private institution. And that doesn't include all the other costs students bear, for such things as housing, food, and books.

In decades past, public education was society's great equalizer and the path upward on the ladder of economic mobility. And today, a college degree is the equivalent of what a high school diploma was 50 years ago--a gateway for many to take part in the American Dream. By 2020, more than 35 million job openings in the U.S. will require a degree from a two-year community college or above.

But for too many working- and middle-class families, attending college is either too expensive to consider or it saddles students with debt for decades to come. Over the past 30 years, the average cost of college has increased 1,120 percent. The result is that student debt has reached an astonishing $1.4 trillion nationwide, with students now graduating, on average, with upward of $35,000 in loans.

It's imperative that college is affordable for all, and New York is leading the way. Recently, New York became the first state in the nation to make our public twoand four-year colleges tuition-free for working- and middle-class families making up to $125,000 per year.

Reducing college costs isn't only good for students, it also makes good economic sense for the nation. That's because allowing all of the most talented Americans to go to college, regardless of their ability to pay, means the U.S. will have the best-trained workforce in the highly competitive global economy.

But simply making college tuition-free isn't enough. We also need to maintain the rigorous academic standards that made our public colleges great in the first place. In New York, admissions standards will remain high, college facilities world-class, and investment in faculty paramount.

For those looking to be successful in life, a college education is no longer a luxury. For the nation's continued economic prosperity, we need to educate more students without saddling them with crushing debt. That's why it's more critical than ever that states across the nation follow New York's lead and move to make college affordable for all.. 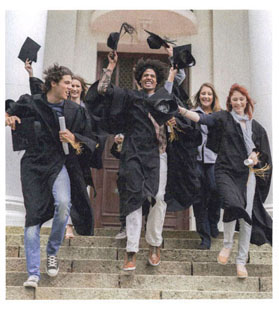 Providing free tuition at public colleges and universities sounds like a great idea. But upon closer examination, it becomes clear that free tuition has many hidden costs.

First of all, providing free tuition isn't going to make college free. These days, nontuition fees like living expenses and textbooks are substantial and can be as challenging for students to pay as tuition itself. And if schools are forced to eliminate tuition, they will certainly increase those other fees in an attempt to compensate.

Eliminating tuition also reduces students' motivation. Research has shown that students who have to earn money to pay some college costs--even if only small expenses--are more spurred to work hard and graduate. As Chenny Ng, an education policy researcher at Northwestern University, put it in a Washington Post essay, "As the cost of attending college drops to zero, so does the perceived cost of dropping out."

Over the long term, eliminating tuition could hurt the quality of our nation's public universities. Right now, those schools rely on tuition to help fund programs. If they were forced to rely on taxpayer funds alone, it's likely that the quality of the education they offer would suffer.

That's because public universities are funded by states, which are required by law to balance their budgets. That means states facing rising costs in some areas must trim other programs, and spending on education is a frequent target.

Consider what's happened in Germany, where universities became tuition-free in 2014. Since then, per-pupil spending has dropped by 10 percent. Germany is an extremely successful country, but its universities are not generally ranked among the world's best. Instead of getting more individual attention in small classes, many German students attend lectures with hundreds of students.

There are many good reasons to try to make earning a college degree more accessible to all students, but offering free tuition is a counterproductive approach..

COLLEGE COSTS BY THE NUMBERS

Over the last 30 years, the cost of going to college has soared

PERCENTAGE of financial aid that comes from the federal government in the form of grants, loans, and other assistance.

SOURCE: THE COLLEGE BOARD 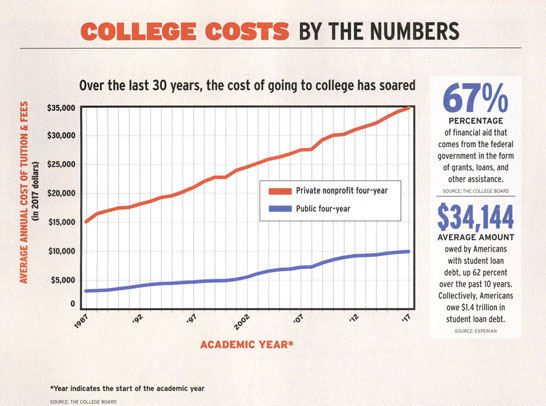 * Year indicates the start of the academic year

SOURCE: THE COLLEGE BOARD

1 Set Focus: Frame the inquiry with this essential question: What are the advantages and disadvantages of eliminating college tuition?

2 Read and Discuss: Have students read the debate and then answer the following questions:

* What is the issue being debated? (The issue is whether students should be able to attend public colleges without paying tuition.)

* Evaluate why these two authors might be interested in and qualified to comment on this issue. (Students may wish to research each writer's background. Cuomo is the governor of New York, which has approved tuition-free college for families making up to $125,000 per year. Brooks is a columnist for The New York Times who writes about politics, culture, and the social sciences.)

3 Core Skill Practice Project or distribute Analyzing Authors' Claims, and have students use the activity to analyze and evaluate each author's arguments.

* Analyze Cuomo's view. (Cuomo argues that making public college free for students in families making up to $125,000 per year gives these students a shot at future jobs and eliminates the crushing debt that many young people leave college with. He also argues that free tuition will benefit the nation by leading to a better trained workforce.)

* Analyze Brooks's view. (Brooks argues that eliminating tuition may prompt public colleges to increase other fees to compensate. He says that eliminating tuition will reduce student motivation to study and graduate. He also argues that it will hurt the quality of education over time because colleges need tuition funds, as states often end up cutting spending on public colleges to balance their budgets.)

In an essay, evaluate one of the debater's arguments. Assess whether the reasoning is valid and whether it's supported with evidence. Point out biases or missing information.

Should public college tuition be free? Have students use the authors' ideas, as well as their own, in a debate.

Go online to vote in Upfront's poll--and see how students across the country voted.

Vote: Choose a side in the debate and see instant results from across the U.S.

Should College Tuition Be Free?