JIM PIAZZA didn't have any reason to trust the president of the North-American Interfraternity Conference. After all, he'd lost his 19-year-old son in an alleged hazing incident at a Pennsylvania State University fraternity house. But in February, just after the one-year anniversary of Tim Piazza's death, the grieving father reached out to Jud Horras, the association's president since 2016. We need to talk, he wrote to Horras.

When Horras saw the email in his inbox, he was nervous. His tenure had been tumultuous for fraternities, which had drawn increasing scrutiny for hazing, alcohol abuse, and sexual assault. If he responded to Piazza, he knew, he'd need to have answers.

They scheduled a meeting in New York City. Horras told Piazza how sorry he was about the loss of his son. Piazza looked Horras in the eye to gauge just how genuine his commitment to reform was. So did his friend Rich Braham, whose son Marquise committed suicide after allegedly being hazed by a fraternity on Penn State's Altoona campus.

Both fathers spent hours talking with each other after the meeting. Do we go forward with this? They had strong opinions about what the future of Greek life should look like, and they weren't sure Horras and others would support their proposals. The next few months brought more meetings. At one, the national president of a fraternity cried.

Slowly, Piazza, Braham, and Steve Gruver, whose son had died after an initiation ritual at Louisiana State University at Baton Rouge, forged a relationship with the Greek leaders. The parents concluded that everyone in the room wanted to promote a culture of decency on college campuses. And they wanted to do everything they could to keep more students from dying.

Those conversations prompted the formation of an antihazing coalition that includes four families, the interfraternity conference, and the National Panhellenic Conference, which governs many sororities. The partnership was announced this month.

"It was not a flippant decision," Piazza said in an interview with The Chronicle. "Our view was, We could've done battle with the fraternities and Greek life in general, or we could make an attempt to work with them to make it better and safer."

Their partnership, Piazza said, has already helped bring about a ban on hard liquor, announced by the interfraternity conference.

The coalition will focus on lobbying from state to state. Horras said it wants states to adopt a better definition of hazing. They also want to make it a felony to commit serious bodily injury, which should include the act of compelling students to drink to the point that they have a blood-alcohol content of 0.25-percent or higher. 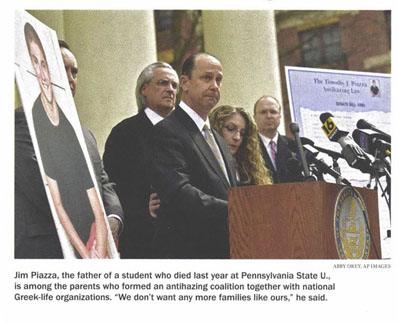 Colleges, too, can do more, Horras said, by expelling students who break the rules, instead of simply shutting down the fraternity chapters.

The group plans to promote antihazing education inside and outside of Greek life, Piazza said. He wants fraternity and sorority members to visit middle and high schools and educate younger students.

He hopes to spread a message about just how prevalent alcohol abuse is in fraternities. When a student dies, national attention prompts a wave of criticism. But what about the students who almost die? What about the many alcohol-related hospitalizations that result from hazing or other illicit activities by the chapters?

Horras said he has talked with Kevin Kruger, president of Naspa: Student Affairs Administrators in Higher Education, about joining the coalition. They also hope to bring college presidents on board. The leaders of Penn State, Louisiana State, and Florida State University joined in recent months to try to make Greek life safer and to publicize fraternity misconduct.

Piazza and Braham say they remain cautious. They know that national fraternity organizations have a reputation as being hands-off. Horras and other fraternity leaders will need to do a lot more to hold individual chapters accountable, Piazza said.

The families are still concerned about the culture of suppressing information that persists in many fraternities. "There's kind of just this pattern of, We're a secret society, and we're going to keep it secret, and if we keep our mouths shut, we'll stay out of prison," Braham said.

He wants to spend more time speaking directly to fraternity members and sharing Marquise's story. He wants to tell them how much he misses his son--and how much their parents would miss them. That's another goal of working with fraternity leaders, he said.

"We don't want any more families like ours," Braham said. "It's the worst."