War of Nerves: Chemical Warfare from World War I to Al-Qaeda

The issue of chemical warfare has frayed the nerves of policymakers for the past century. Most recently, the U.S.-led coalition fully expected to find stockpiles of chemical weapons when it invaded Iraq (it did not). The United States and others worry that terrorists may figure out how to make them and then use them.

Yet as Jonathan B. Tucker makes clear in this highly readable and authoritative history, the current situation regarding chemical warfare is far brighter than many thought possible two or three decades ago. Back then, the United States and the Soviet Union were building up their chemical weapons stocks, and their use was considered likely if the Cold War turned hot. In the 1980s, Saddam Hussein unleashed chemical weapons in the Iran-Iraq War, as well as against the Kurds in northern Iraq. Today, by contrast, in the wake of the 1993 Chemical Weapons Convention (CWC) and its strict enforcement provisions, there is a clear international taboo against the use, production, development, and stockpiling of such weapons.

Despite this analysis, however, Tucker makes it clear that it would be dangerous to believe that the chemical warfare problem has been solved. Few analysts would disagree with his conclusion that the international norm against chemical warfare remains fragile.

The book charts chronologically the development of chemical weapons and their use from World War I to the mid-1990s, when the group Aum Shinrikyo released Sarin (a nerve agent) in the Tokyo subway system. Although Al-Qaeda is identified in the book's subtitle, that terrorist group is featured only in the last 20 pages as one of several emerging threats. But this is not a policy book; it is a history, and in that regard, it should be the first pick off the shelf for anyone who seeks an in-depth account of the history of chemical warfare.

The first 100 pages chart the development of chemical weapons and chemical warfare during World War I, the interwar period (1919-1939), and World War II. Widespread use of chemical weapons in World War I and more limited use during the interwar period (for example, Italy against Abyssinia) occurred despite the moral taboo, normative codes, and legal agreements against them. During World War I, 39 different toxic agents were used, causing nearly 1 million casualties and an estimated 90,000 deaths. More than half those fatalities were suffered by Russia (56,000), and chemical warfare casualties are estimated to have accounted for about a quarter of the estimated 272,000 U.S. injuries.

The disproportionate numbers of deaths in Russia and casualties in the United States may have had an impact on later U.S. and Russian/Soviet thinking about chemical weapons and their utility. Certainly, the continued use of chemical weapons was expected, and General Amos A. Fries (later chief of the U.S. Chemical Warfare Service) believed not only that chemical warfare was something every state would have to reckon with, but also a form of warfare "civilized nations should not hesitate to use," Tucker writes.

Despite the 1925 Geneva Protocol, which prohibited the use but not the development, production, or stockpiling of chemical weapons, the weapons retained their appeal. Thus, although the U.S. government supported the protocol, Fries was instrumental in the coalition of veterans' groups, chemical manufacturers, and the American Chemical Society that lobbied against the treaty, ensuring that it did not come to a vote in the Senate. Support for the maintenance of a chemical weapons option in warfare remained strong in the military. The chemical genie was out of the bottle, and few believed it would be easy to prevent future use and proliferation. The United States finally ratified the Geneva Protocol in 1975. (Industry attitudes about chemical weapons have changed drastically since the 1920s. By the late 1980s, the U.S. government's effort to develop chemical weapons was hindered by an inability to secure the necessary chemicals. Tucker quotes one industry spokesman as saying: "In this day and age, who wants to be involved in providing chemicals that go into chemical weapons?") 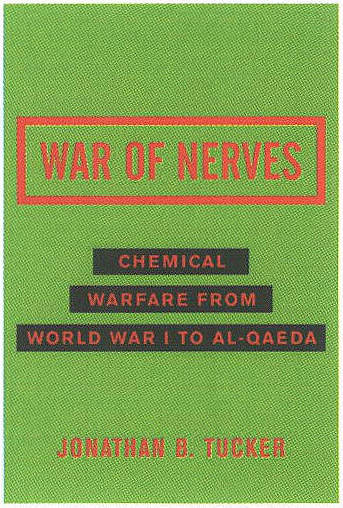 In the next 150 pages of the book, Tucker examine events through the 1980s, including the development of the extensive U.S. and Soviet chemical weapons programs as well as the programs of other states, including France and Egypt. Because of the book's emphasis on chemical warfare, the reader learns more about the programs of states that actually used these weapons than those of states believed to have developed stockpiles. Hence, whereas Iraq's chemical warfare capability and its use of the weapons are fully documented, Syria's chemical weapons program receives scant attention. In addition, the ambiguities between defensive activities (protective measures such as respirators) and offensive chemical weapons research in Israel's program are brought to light only in relation to the investigation into a 1992 accident in Amsterdam involving an El Al cargo plane that was carrying precursor chemicals for nerve agents.

Tucker discusses the role that politics and other considerations have played in determining whether a country's use of chemical weapons was robustly condemned or tacitly accepted. Italy suffered no consequences for its use of chemical weapons against Abyssinia in 1935 because the League of Nations was unable to agree on a response to the violation of the Geneva Protocol. The international community was indifferent to Egypt's flagrant violation of the Geneva Protocol in the mid-to-late 1960s in part because of the Cold War and in part because the United States did not want to risk a backlash against its own use of tear gas and herbicides, notably Agent Orange, in Vietnam. Iraq also suffered no serious consequences for using chemical weapons against Iran during the 1980s, because of geopolitical considerations. The United States and other western countries, as well as many Arab states, feared an Iranian victory more than they feared the use of chemical weapons. However, as Tucker points out, this sporadic and inconsistent condemnation of chemical weapons use, as well as the growing arsenals in the United States, Soviet Union, and other countries, played a role in the proliferation of chemical weapons capabilities to China, Egypt, Iraq, North Korea, Syria, and Yugoslavia.

The final chapters of War of Nerves chronicle developments at the end of the Cold War and in its aftermath; the proliferation of the capabilities needed to develop chemical weapons, including to nonstate actors; the reemergence of the taboo against chemical weapons; and the lengthy, painstaking negotiations that led to the 1993 CWC, which with its entry into force in 1997 finally made global chemical weapons disarmament a real possibility. And yet, as Tucker notes, they are unlikely to go away completely. For example, there is continuing concern about a new generation of chemical weapons widely rumored to have been developed by the Soviet Union and continued by Russia. The available evidence, however, is not sufficient to prove that Russia has an offensive program, Tucker concludes. He provides a good summary of the main concerns about Russia's formal declaration under the CWC and its 40,000-metric-ton stockpile, an amount that many observers considered and still consider an underestimate of the actual stockpile. But the United States and its European allies have not pressed Russia on this issue, opting instead to try to keep that country moving in the right direction toward disarmament and greater transparency.

The penultimate chapter in the book, although relatively short at 23 pages, covers virtually all the recent and current chemical weapons events and issues, including the activities of the United Nations in disarming Iraq, the U.S. invasion of Iraq in 2003, the potential pariahs that have chosen not to become parties to the CWC (including Egypt, Israel, North Korea, and Syria), the rise of Aum Shinrikyo, and the emergence of Al-Qaeda. Despite the threat posed by Al-Qaeda and its known stated interest in chemical weapons, it remains far from clear whether that terrorist network actually has the capability to produce chemical weapons and use them. Tucker points out that the Al-Abud terrorist network in Iraq tried and failed to manufacture mustard gas and tabun in 2004.

There are certainly far more questions posed in the final chapters than there are answers provided, which will disappoint people looking for a quick fix. But readers looking for an in-depth and balanced appraisal of the long, complex history of chemical warfare will be well served by this book.