The 1921MURDER trial of the young Italian immigrants Nicola Sacco and Bartolomeo Vanzetti was one of the most controversial trials in U.S. history. For some observers, the trial was a way to bring two criminals to justice. For others, the two men were innocent of the crime but were found guilty because they were immigrants and political radicals. Defenders of Sacco and Vanzetti waged a fierce legal and public relations battle to save their lives, but the men were executed in 1927.

On April 15, 1920, in South Braintree, Massachusetts, a paymaster and a security guard for a shoe company were delivering a $15,000 payroll for the business. Two men in an automobile fatally shot these two employees, stole the money, and fled. Eventually, the police focused on Nicola Sacco and Bartolomeo Vanzetti as their prime suspects.

The men appeared to be unlikely armed robbers. They had arrived in the United States in 1908. Sacco found work as a shoemaker, and Vanzetti became a fish vendor. Politically, they were anarchists who opposed all governments. Their opposition to WORLD WAR I led them to emigrate from the United States to Mexico to avoid military CONSCRIPTION . They returned to the United States in 1920 and settled in Massachusetts.

The police took Sacco and Vanzetti into custody primarily on the basis of two pieces of evidence. Sacco owned a pistol of the type used in the murders, and the men were arrested at a garage attempting to reclaim a repaired automobile that had been seen in the vicinity of the South Braintree crime scene. Sacco and Vanzetti knew very little English and gave confusing and false answers during their interrogation, which diminished their credibility.

Sacco and Vanzetti were indicted on September 11, 1920, for the murders and the ROBBERY . The trial began on May 31, 1921, before Judge Webster Thayer. The defendants were represented by Fred Moore, who had been hired on their behalf by the recently formed AMERICAN CIVIL LIBERTIES UNION .

EYEWITNESS testimony at the trial was contradictory. A few witnesses gave detailed descriptions of Sacco and Vanzetti, but on CROSS-EXAMINATION many of the details proved inaccurate. Several defense witnesses testified that Sacco had been in Boston at the time of the murders.

Prosecutor Frederick G. Katzman used the unreliable answers that the defendants had given during their initial interrogation to impugn their credibility. He also made irrelevant remarks about the defendants’ unpopular political beliefs and their lack of patriotism. Judge Thayer allowed these remarks to pass. Some trial observers noted that Thayer was hostile to the defense and that he may have been biased in favor of the prosecution.

Moore argued that the defendants’ poor English was at the root of the false information they provided and that they were innocent men thrown into an incomprehensible situation.

The jury convicted Sacco and Vanzetti of the murders and the robbery on July 14, 1921. The convictions drew cries of outrage from socialists, radicals, and prominent intellectuals in the United States and Europe. Investigators were hired to look for new evidence that would prove Sacco and Vanzetti were innocent.

Over the next six years, Sacco and Vanzetti’s lawyers presented many motions to Judge Thayer, asking that a new trial be granted so that new evidence could be introduced. Investigators claimed to have uncovered evidence that would refute damaging testimony of several prosecution witnesses. At that time Massachusetts law gave the trial judge the final power to reopen a case on the basis of new evidence. Thayer adamantly refused to order a new trial.

In 1925, Celestine Madeiros, a convicted murderer awaiting execution, confessed to being a member of a gang that had committed the South Braintree crimes. He absolved Sacco and Vanzetti of any involvement. Thayer refused to recognize the statement as adequate evidence to justify a new trial. The Supreme Judicial Court of Massachusetts agreed to review the case but affirmed the verdict (Commonwealth v. Sacco and Vanzetti, 255 Mass. 369, 151 N.E. 839 [1926]).

FELIX FRANKFURTER , a Harvard law professor and future member of the U.S. Supreme Court, believed that the trial had been a travesty of justice and labored on the many post-trial motions. He and others used the press to make their claim that Sacco and Vanzetti were victims of political and ethnic bias.

On April 9, 1927, Sacco and Vanzetti received the death sentence. This set off a storm of protest, with mass meetings throughout the United States. Massachusetts governor Alvin T. Fuller appointed an independent advisory committee composed of two university presidents and a former judge to review the trial and its aftermath. On August 3, the governor announced that he would follow the panel’s recommendation and not grant Sacco and Vanzetti CLEMENCY .

More protests erupted in many cities, and bombs were set off in New York and Philadelphia. On August 23, 1927, Sacco and Vanzetti, still maintaining their innocence, were executed in the electric chair.

Many years after the executions, in 1941, additional evidence related to the case emerged. Anarchist leader Carlo Tresca claimed to have knowledge that Sacco was guilty, and Vanzetti was innocent. This claim was published in a 1961 National Review article by Max Eastman. Like many issues related to the case, the significance of this evidence has been debated. While some individuals lent support to Tresca’s claim by indicating that they too had been told the same information by Tresca, others undermined the credibility of the claim by pointing to an ongoing feud between Tresca and the anarchist group to which Sacco and Vanzetti belonged.

In 1952 the labor organizer Anthony Ramuglia admitted that a Boston anarchist group had asked him to provide a false alibi for Sacco. He was allegedly removed from the 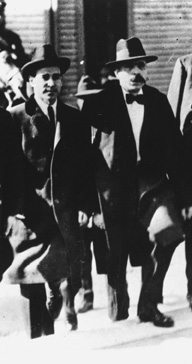 Nicola Sacco (left) and Bartolomeo Vanzetti. Many legal observers believed then, as now, that the men should have been granted a new trial after their conviction in 1921. - LIBRARY OF CONGRESS

alibi list, however, because he had been in jail at the relevant time.

In October 1961 ballistic tests using improved technology were performed on Sacco’s pistol. The tests revealed the bullet that had killed one of the men was indeed fired from Sacco’s weapon. That finding was substantiated upon further research conducted in 1983. This evidence tends to support Tresca’s claim that Sacco was guilty of the crime.

However, the ballistic evidence has been a source of ongoing debate. In 1988 a claim emerged suggesting that police experts had switched Sacco’s pistol with the murder weapon. Hence, it has been argued that Sacco’s pistol was not, in fact, used in the crime.

The guilt or innocence of Sacco and Vanzetti continues to be debated. Most commentators agree, however, that the defendants should have been granted a new trial because the first one was tainted with political and Page 472  |  Top of Articleethnic prejudice that made a fair proceeding impossible.

Frankfurter, Felix. 2003. The Case of Sacco and Vanzetti: A Critical Analysis for Lawyers and Laymen. Buffalo, N.Y.: W. S. Hein.

Kadane, Joseph B., and David A. Schum. 1996. A Probabilistic Analysis of the Sacco and Vanzetti Evidence. New York: Wiley.