The trouble with cultural appropriation: it's less about stealing, more about integrity ...

The term "cultural appropriation" has been doing the rounds lately. I define it as the taking of an original idea by members of a dominant group from a minority without acknowledgement, and insidiously refashioning it, so that said idea appears as if it had always belonged to the dominant group.

One of the better examples of this is the Hoodia case involving Canadian pharmaceutical company, Phytopharm, which secured a patent for the active ingredient of the Hoodia plant, an appetite suppressant used for centuries by the Basarwa people. It was only when the Basarwa (also known as the Saan) protested after South Africa's Council for Scientific and Industrial Research had granted a patent to Phytopharm that something vaguely resembling an acceptable deal was negotiated.

A better-known example is Rock 'n' Roll, pickpocketed from African-Americans, then so thoroughly appropriated by white America that it became something so completely their own--without even the barest acknowledgement to the originators of the sound that at present, a black parent in America may be heard accusing their Rock 'n' Roll loving child of playing "white music".

But we are some way down a slippery slope when we decide that all transactions from one culture to another constitute cultural appropriation.

In 2014, Nigerian mixed media artist, Akweake Emezi directed a film entitled Ududeagu. It won Best Short Experimental Film at the Blackstar Film Festival that year. At the same festival this year, a Spanish artist, Mariona Lloreta premiered her film Amenze. It is quite possible that the festival organisers had a visual impairment; none of them appeared to notice the uncanny resemblance between the two films' posters.

As Lloreta is unlikely to profit from it because she got caught, I find it difficult to term her thieving "cultural appropriation".

At the Brisbane Writers' Festival in September, American author Lionel Shriver caught flak for her keynote speech on "Community and Belonging" (she changed it to "Fiction and Identity"). Having appropriately redirected her thematic energies, Shriver stated that she hoped "the concept of cultural appropriation is a passing fad". Concerning minority cultures, she went further to say that they are "now encouraged to be possessive of their experience and to regard other people's attempts to participate in their lives and traditions, either actively or imaginatively, as a form of theft". Shriver then gave examples of literature we would not have, were people expected to shy away from writing about other peopie's cultures.

I found Shriver's keynote a tad shallow. In naming only white Western writers who have written on minorities, she gave ammunition to those who accuse white people of "stealing their stories". And by suggesting that minority cultures are "encouraged to be possessive of their experiences", she also put me off her latest work, which, worryingly, is concerned with black American culture.

That said, I broadly agree with her.

Policing who can speak, write or draw is problematic. To be an artist is to take inspiration indiscriminately. I admit to having been annoyed--and I probably still am - by Western artists especially, when they write about minorities (or even when they render Us as minorities in their post-imperial imaginations), but not because they have appropriated our stories. My annoyance stems from the fact that in many cases, their rendering of The Other often produces cliched one-dimensional narratives that generally confirm underlying prejudices.

In a world where black people have been insulted and compared to monkeys, there was nothing nuanced, for instance, about South African cartoonist Jonathan Shapiro, a white South African (aka Zapiro), depicting a black person as a monkey dancing to the tune of a head of state. On the other hand, it is difficult for me to be annoyed by Lauren Beukes' depiction of her main character Zindzi in her sci-fi novel, Zoo City, and l am yet to meet a white person who has a problem with the work of Helen Oyeyemi. 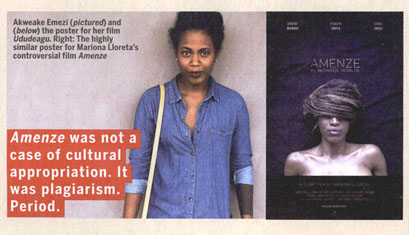 Lately when someone from my own cultural group yells "cultural appropriation" about another person, I ask myself whether I would say the same, if the work was done by someone from my group. If not, then I conclude that it is just bad art. Let's face it: there have been cases where black artists themselves "do coonery" because they think that is the best way to be marketable.

The danger lies in smuggling bad art and plagiarised work into the grand theme of "cultural appropriation". It merely empties what is a much bigger phenomenon of its real import.

The trouble with cultural appropriation: it's less about stealing, more about integrity ...