The life-long benefits of reading for pleasure

How does reading for pleasure, both in childhood and in adulthood, influence the development of our vocabularies through adolescence and into mid-life? This is the question that my co-author Matt Brown and I set out to answer using the 1970 British Cohort Study (BCS70). We wrote two papers on our findings, the first addressing vocabulary development up to age 16, and the second looking at vocabulary growth in adulthood, between the ages of 16 and 42.

BCS70 follows the lives of everyone born in England, Scotland and Wales in a single week in 1970. We interview the cohort members every few years in order to keep track of many different aspects of their lives, from education and employment through to physical and mental health. This makes the study particularly powerful, because we are able to look at what influences the development of individuals' lives over time. Over 9, 800 people responded to the survey last time we interviewed the 1970 cohort, which was in 2012, when the cohort members were 42 years old.

Reading for pleasure and attainment at 16

The first issue we looked at was the role of reading in intellectual development up to age 16. It won't surprise anyone that bright children tend to read for pleasure more than their less bright peers. But does reading for pleasure actually increase the rate of children's learning? The BCS70 study members took a range of cognitive tests at age 16. We compared children from the same social backgrounds who had achieved similar cognitive test scores at ages 5 and 10. We discovered that those who read books often at age 10 and more than once a week at age 16 gained higher test results at age 16 than those who read less regularly. In other words, reading for pleasure was linked to greater intellectual progress, both for vocabulary, spelling and mathematics. And reading for pleasure made a very substantial difference--around four times greater than the difference made by having a parent with a degree compared to having parents with no qualifications.

Reading clearly exposes young people to new vocabulary, so the link between reading for pleasure and vocabulary development is to be expected. The link our research has shown between reading for pleasure and progress in maths may seem more surprising. However, I would suggest that reading introduces young people to both new vocabulary and to new ideas, and both of these things are likely to enable them to better understand and absorb new information and concepts across the curriculum. In addition to this, independent reading may promote a more self-sufficient approach to learning in general.

Reading for pleasure and vocabulary at 42

What happens to language development once our school years are behind us? Our second paper looked at vocabulary growth between the ages of 16 and 42. In 2012, we asked the cohort members once more about their reading habits, alongside many other factors in their lives. This allowed us to address research questions such as, does reading still have a part to play in learning in adulthood? And if so, does it matter what you read, or is it just the amount of reading that counts? 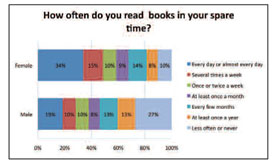 One piece of good news which won't come as a surprise to librarians is that learning doesn't stop at the end of the school years. In fact, our study members demonstrated large gains in vocabulary between the ages of 16 and 42. At age 16, the average vocabulary test score was 55%. By age 42, study members scored an average of 63% on the same test.

People varied widely in the types of books they liked to read, and this was linked to their level of educational attainment. We were struck by the differences in literary tastes between graduates of elite universities (known as the Russell Group) and other universities. When asked which kinds of books they usually liked to read, 43% of graduates of Russell Group universities included classic fiction such as Jane Eyre or Bleak House, compared to 29% of graduates of other universities and 11% of people with no qualifications. Contemporary literary fiction by authors such as Angela Carter or Paul Auster was even more of a select preserve, with 48% of Russell Group graduates, 30% of other graduates and 5% of people with no qualifications saying they usually liked to read this kind of fiction. Crime fiction, on the other hand, was the most popular reading matter. Forty three per cent of all respondents enjoyed crime fiction, and it was the most popular genre with everyone from people with no qualifications (36%) to people with Russell Group degrees (55%).

Turning to factual books, the readerships of genres such as sport and autobiography are fairly undifferentiated by educational status, while more intellectual topics such as science and politics, economics and current affairs show a marked educational gradient in readership, including a divide between Russell Group graduates and other graduates.

There were also strong educational differences in newspaper readership. Fifty-six per cent of Russell Group graduates read only broadsheet newspapers, compared to 34% of those with degrees from other universities, and 7% of those with no qualifications. Conversely, 9% of Russell Group graduates read only tabloids, compared to 22% of other graduates and 55% of people with no qualifications.

So, who increased their vocabularies the most between the ages of 16 and 42? Our statistical analysis took account of differences in people's socio-economic backgrounds and in their vocabulary test scores at the ages of 5, 10 and 16. We found that reading for pleasure in both childhood and adulthood made a difference to rates of vocabulary growth between adolescence and mid-life. Childhood reading for pleasure appeared to exert a long-term positive influence of vocabulary development up to age 42. In addition, those who read for pleasure frequently at age 42 experienced larger vocabulary gains between adolescence and mid-life than those who did not read.

It seems that it isn't just how much you read, but also what you read that makes a difference. People who read high-brow fiction (such as classic fiction and contemporary literary fiction) made the greatest vocabulary gains.

Concerns have been raised that young people today are reading less in their spare time than previous generations. This is particularly worrying given that our research suggests it is likely to have repercussions for their intellectual development. 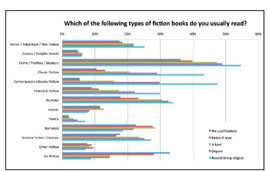 We also know that reading for pleasure tends to decline between the primary and secondary school years. Young people today have many competing demands on their time, but new technologies should make it easier than ever to share books and information about what to read. It is vital that schools promote reading for pleasure, and it is therefore worrying that many schools today do not have school libraries. Our findings emphasise the importance of schools and libraries working to ensure that all young people have access to a wide range of books. It is also vital that young people are helped to discover authors that they will enjoy. The threat to public libraries is also a potential threat to lifelong learning.

Most importantly, we need to consider how to foster a love of reading in children who come from homes with few books, as we know that a lack of books in the home is one of the most powerful predictors of educational failure. A final message from our research is that not all reading is equally beneficial to learning, and the greatest gains come from more intellectually challenging fiction.

We will keep following the 1970 birth cohort into their older years, when we will be able to examine whether reading for pleasure protects against cognitive decline in old age. Without the extraordinary generosity of these people who find themselves in the study simply because of the accident of their dates of birth, we would not be able to research these and other vital questions regarding people's development throughout their lives. 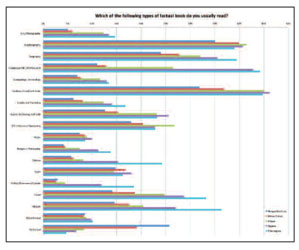 * Professor Alice Sullivan is Director of BCS70 and Head of the Department of Quantitative Social Science at the University College London Institute of Education.