Decolonizing Your Library: Building an Inclusive Graphic Novel Collection and Beyond.

Decolonization work and graphic novels may not seem like an obvious pairing, but in fact, the two can go hand in hand. In recent years, library workers have extended diversity efforts into the realm of comics with varying degrees of success. The explosion of children's and young adult series, the branching out of new imprints and indie publishers into the format, and the expansion of representation efforts by superhero brands like Marvel and DC (in fits and starts) has meant that it is easier now than ever before to buy graphic novels and comic books with diverse representation. Yet decolonization in libraries--and specifically within collection development--has only begun gaining traction in the last few years.

Although diversity work and decolonization complement one another, they are not synonymous, each having its own goals and processes. I am not Indigenous and do not claim to speak for Indigenous people; however, as a queer and genderqueer Black librarian deeply invested in IDEA (inclusion, diversity, equity, and access), I believe in collective liberation and working together to dismantle oppressive systems, and I hope this list of tips and recommendations will help library workers begin their decolonizing journeys.

What is decolonization? Originally, it referred to the political act of declaring and fighting for independence from imperial rule. Today, in its broadest and most simplistic definition, decolonization is the decentering of whiteness and imperialistic systems and ideologies. In their book For Indigenous Minds Only: A Decolonizing Handbook (2005), professors and activists Waziyatawin and Michael Yellow Bird took it further, writing that decolonization is "the meaningful and active resistance to the forces of colonialism that perpetuate the subjugation and/or exploitation of our minds, bodies, and lands. Its ultimate purpose is to overturn the colonial structure and realize Indigenous liberation."

Decolonization should be treated like a verb; it is a process and a conversation rather than a description or static state. This article focuses on a very small step within a very large body of work, work that must be done on both the individual and systemic levels. It is a good starting point but cannot be the end.

Although this article is about decolonizing graphic novel collections, most of the concepts herein can be transferred and expanded upon in other collection areas--and beyond collection development entirely. Once you have a basic understanding of how to begin decolonizing and diversifying your graphic novel collection, and have added some Indigenous-centered titles to your shopping carts, (for specific tips on finding some, see p. 18) it is time to talk about what comes next.

Take stock of the books already on your shelves and the way the physical space is used. Ask yourself the following questions:

* Do they traffic in harmful stereotypes or promote hostility or disempowerment of vulnerable communities?

* Are the subject headings in your catalog inclusive, or do they contain offensive and outdated terminology? 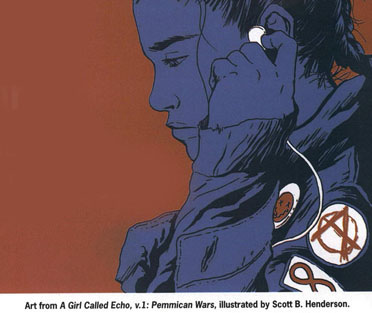 * Do you have marginalized participants on or leading panels and programs all year or only during heritage and pride months?

* Do you have written and enforced policies that defend vulnerable patrons from bigotry and abuse?

* Do police officers patrol your branch?

When thinking about the institution as whole, consider:

* Are you hiring and retaining BIPOC staff at all levels of employment, including in leadership positions?

* Are library staff being paid fair living wages, at both the paraprofessional and professional levels?

* Are you still evaluating applicants based on "fit" or proximity to your system?

* Do BIPOC staff and community members have a say in how the library functions, and are those voices nurtured and supported?

* Are you doing outreach to local communities of marginalized or disenfranchised people? Is your system still beholden to "neutrality," even in situations when it causes more harm than good?

* Are patrons being fined, charged for lost materials, or sent to collections?

* Are your policies for giving out library cards inclusive of undocumented or houseless people and people whose chosen name does not match their legal ID?

* Is IDEA being taught, discussed, practiced, and engaged with on both the individual and system levels?

* Are those who resist, hinder, or slow down the process of diversifying and decolonizing being called out or catered to?

These questions are difficult and may reveal unsatisfactory answers, but do not let discomfort stop you from doing the work. A truly decolonized library would look and function radically differently from how most libraries do and would require dismantling the oppressive, cisalloheteronormative, white-supremacist system.

As mentioned earlier, decolonization is a process, not a checkbox. Decolonizing your graphic novel collection is part of the larger work of decolonizing your library. We often talk about the library as the heart of our community and one of the last places where the public can freely access information. To fully live up to our mission, we must break down the barriers erected by white supremacy. It is vital that library workers come together to decenter and shift the current power structure to create a diverse, equitable, inclusive, and accessible library for all patrons.

Alexandria Brown (they/them) is a high school librarian, award-winning speculative fiction critic for Tor.com and Locus Magazine, and author of two books on the history of marginalized communities, Hidden History of Napa Valley (2019) and Lost Restaurants of Napa Valley and Their Recipes (2020).

Many libraries and systems purchase titles from a few big, centralized repositories, but these are typically owned by white, Western people, and decolonizing means putting your money where your mouth is. The following list includes booksellers and publishing companies that produce and distribute Indigenous stories, followed by a bibliography of graphic novels and zines recommended for all collections.

Based in Vancouver, Canada, Arsenal Pulp publishes a variety of diverse and intersectional books and graphic novels, including several Native-authored titles.

There are a handful of Native-owned bookstores in the country, including Birchbark Books in Minneapolis, Minnesota, owned by renowned author Louise Erdrich.

High Water, an imprint of Portage & Maine Press, is another Canadian publisher, this one specializing in Indigenous writers in Canada. It prints in a variety of genres and formats.

Located in Albuquerque, New Mexico, this is the only Native-owned comic book store in the U.S. What better place to buy Indigenous-centered comics and graphic novels than an Indigenous-owned comics shop? 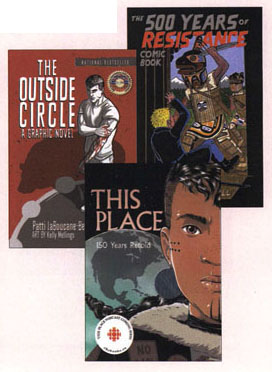 From "Red Clouds," by Jen Storm, art by Natasha Donovan, included in the anthology This Place: 150 Years Retold.

Dine: Our Survival Is Bound to Theirs. By kuwa jasiri. 2018.

Everyone Calls Themselves an Ally until It Is Time to Do Some Real Ally Shit. By Xhopakelxhit. 2015.

Qualifications of Being. By Raven Two Feathers and Jonny Cechony. 2020.

There are countless ways to help these titles circulate:

* Use ever-popular options like endcaps, shelf talkers, and book displays.

* Make an effort to include Indigenous authors--and those from other underrepresented communities--in readers' advisory, booktalks, book clubs, giveaways, staff picks, book lists, and on social media.

* Handsell--in my experience, it's the best way to introduce new readers to titles they might not pick up on their own.

* Partner with educators, if you're a school librarian, to update the curriculum to be more mindful of Indigenous histories and cultures.

* Invite Indigenous creators and activists to be on library programs and panels. Reach out to your local tribal representatives and Native community organizations about potential outreach and collaboration opportunities.

* For library workers in need of a solid background on the issues, get a copy of Native Americans in Comic Books: A Critical Study (2008), by Michael A. Sheyahshe.

Making Use of Zines

Because zines exist outside of traditional publishing and are often created as a form of resistance and counterculture expression, they can make an excellent medium for exploring decolonization. Consider providing free zine-making materials to your library patrons and hosting a Zine Fest spotlighting Indigenous creators. Some zines are available for free online, while others can be purchased. I recommend adding both kinds to graphic novel collections.

Some zine publishers to get you started: Indigenous Action Media, Indige*Zine, Muchacha Fanzine, and Warrior Publications.