Comics and graphic novels are tricky for libraries, especially comics of the superhero persuasion. When the collection is strong, comics and graphic novels are among the highest-circulating collections in a library. Even after librarianship has mostly embraced the medium--advocating for comics and graphic novels in libraries and dedicating spaces to them in our buildings and nearly every professional publication--the format sometimes still seems like a foreign body that were trying to shoehorn into our already existing system. This can get messy, and this mess means that we aren't making comics as accessible as possible to those who want them.

To the detriment of our users and our circulation, library classification and organizational systems were not created with comics in mind and, friends, it shows. When we try to force comics and graphic novels into our traditional classification systems--DDC, LCC, or organized by author--things get horribly jumbled.

There is hope, however, of getting your superhero comics collections in order for your patrons, but it may mean doing the unthinkable: disregarding conventional library practices and foregoing a familiar classification system. If the uniform doesn't fit, don't wear it. Instead, librarians need to feel empowered to experiment and create their own systems of organization that work best for their comics and graphic novel collection, their users, and their libraries.

If the thought of this distresses you, try thinking of it this way: comics aren't books; comics is its own unique medium, only superficially resembling books because it is sometimes delivered to the audience through paper and ink. If you think of comics as its own medium, as different from traditional books as movies are, then you can free yourself to take different approaches to how they are organized and craft a system that best suits them and your comics-loving patrons.

Why an In-House Classification System?

Why don't our traditional classification systems work with superhero comics and graphic novels, exactly? Firstly, superhero comics are notoriously difficult to organize due to the frequent relaunches resulting in repetitive numbering, multiple series sharing the same title, and most series having multiple creators. When these monthly comic books are collected into hardcovers or trade paperbacks, it's possible for any given library to have two or three different books called The Amazing Spider-Man, v.1 or Captain Marvel, v.3. This makes organizing comics by series title a mess; different volumes get chronologically mixed up on the shelves, and your poor comics readers, what are they to do? How are they to read them all sequentially if we cannot keep them sequential on our shelves?

The multiple creators that can be attached to any superhero series within just a few years' time exacerbate this problem. Many libraries will organize their superhero comics by author, but this can cause an unusable jumble. After all, the most recent Wonder Woman, v.4 may be written by Greg Rucka and volume 5 may be written by G. Willow Wilson. Filing one entry of the story with the R's and another with W's causes inconvenient separation. Plus, patrons will rightfully expect all series within a certain franchise to be together on the shelves, regardless of series title or creator. Couple this with the frequent renumbering and, well ... yikes.

First, consider how comics readers find what they're looking for. You can start by looking at your local comics shop's shelf organization for inspiration. After all, they are the experts, and comics shops have trained comics readers how to browse for the materials over the past few decades. You can also do what we librarians do best: borrow ideas from each other!

The goals are to keep all like titles together and to keep the volumes of a particular series in chronological order, even if they share a title or have different creators. Organizing your comics in this way, in whatever method works best for your building and your audience, is a sure way to make your comics collection more browsable and easier to shelve for staff.

Based on my experience, I recommend that any in-house classification system for comics should prioritize the metadata in this order: Franchise > Series Title > Volume Number. So the call number for X-Factor, v. 1 could look like: 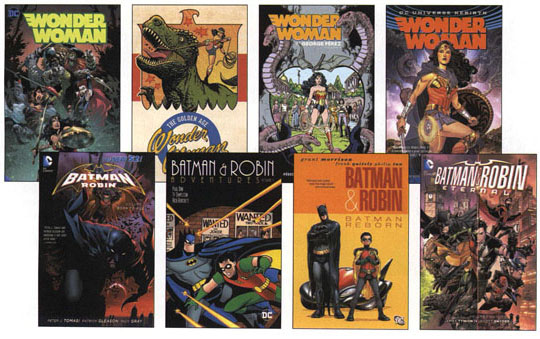 Another piece of metadata to consider is the publisher, since many comics readers seek a particular publisher, often the Big Two of DC or Marvel or others like Image. That same X-Factor, v. 1 might look like this:

Another method that libraries have used is to put the year of publication in the call number. This can be very useful when tackling the pesky problem of multiple series sharing a title. By having a call number such as "BATMAN (2011) v1" on the spine, one can keep "The New 52" Batman series and its subsequent entries separate from the "Rebirth" Batman series, whose call number would be "BATMAN (2016) v1." This is a handy and simple method to keep things organized, and it mostly keeps like titles together in a franchise, as well. It's not perfect, and it does create some confusion when it comes to one-offs and one-shots within a franchise, but it's certainly better than organizing by series title alone. One drawback is that including the full four-digit date can make a call number rather large and take up much spine space.

An even better option is one crafted by Lucas McKeever at the Elmwood Park Public Library in Illinois. This method involves assigning a static number to a series and incorporating this into a call number. The rest of the call number is a simple abbreviation of the franchise. Take for example the series Captain Marvel from 2012 by Kelly Sue DeConnick and Captain Marvel from 2014, also by DeConnick. To keep these series separate, you could assign the static number of " 1 " to the former and "2" to the latter. Such call numbers, then, would appear as "CAPTAIN 1 v1" and "CAPTAIN 2 v1." You could abbreviate further, using "CPTN" for "CAPTAIN," because this, thankfully, is a very versatile system that allows for customization. This system also allows for one-shots and one-offs, such as Captain America: Truth; Red, White, and Black; you can simply assign them a static number, too, and treat them like their own series. This keeps franchises together, and it keeps all individual series within that franchise in order.

Some libraries--those with lots of shelf space, mind you--genrify their comics and collections. Some examples of these genres would be nonfiction, biography, graphic novels, comic strips, superheroes, and so on (and yes, dear reader, contrary to a popular misconception, "graphic novel" is a category of comics, not its own format). Under these genre categories, then, you can organize the titles however you see fit, such as by franchise or series title for superhero or by author for graphic novels. If you have the space for such a system, this is an excellent way to keep all your comics-seeking patrons happy, from lovers of superheroes to those looking for something literary, while also leaving room for a patron to discover something new through serendipity.

Speaking of serendipity, once you have your superhero comics organized by whichever way you come up with, one solid bonus idea comes from Robert G. Weiner himself, who wrote about it in the book Graphic Novels and Comics in Libraries and Archives (2010). You can give your circulations an even nicer boost by taking any books that are comics-related--such as how-to-draw books, books about the history of comics, prose novels featuring comic book superheroes, and so on--and adding them to your comics and graphic novel shelves. Any patrons who would be looking for these books on your regular shelves would likely be interested in the source material and vice versa, so, though they come in different formats, they still fit perfectly.

Creating an in-house classification system can be a lot of labor and will require buy-in from multiple sources in your organization, such as management and technical services, but making such a change and being creative can vastly improve the experience of your comics and graphic novel lovers and give a hefty boost to your circulations. In the end, if done with thoughtfulness and strong data behind the decisions, in-house classification is worth the effort. Comics is a unique medium that deserves unique treatment. Your patrons deserve the best possible access to all of your materials, so don't let adherence to traditional systems keep that from happening if those systems are not the best fit for the material in your library. As librarians, organizing and problem-solving are what we do, so put those skills to use if you need to improve access to your comics collections. Comics and graphic novels are here to stay, and they (and their readership) deserve our finest professional organizational skills.

Jack Phoenix is a librarian in the Greater Cleveland area and author of the SLJ star-reviewed guidebook Maximizing the Impact of Comics in Your Library: Graphic Novels, Manga, and More (2020).