Modern medicine and the great war

The Smithsonian institution's National Museum of American History, Washington, D.C., is commemorating the centennial anniversary of U.S. involvement in World War I with a series of exhibition displays (on view through January 2019) that explore the influential role of the war on American society: "Gen. John J. Pershing and World War 1,1917-18"; "Uniformed Women in the Great War"; "Advertising War: Selling Americans on World War I"; "Artist Soldiers: Artistic Expression in the First World War"; and "Modem Medicine and the Great War."

World War I remains one of the most devastating conflicts in human history, as millions of lives were lost across the four years the conflict raged, but it could have been worse if not for rapidly advancing medical technologies and techniques.

Prior to WWI, things like health standards and sterile operating procedures were not widely practiced; X-rays had yet to be invented; and antiseptics were dangerous and largely ineffective. 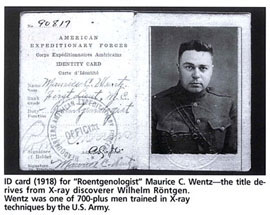 Thanks to innovative medical pioneers and in response to a desperate demand, medical practices that were developed during the war changed the country's approach to health care In ways that continue to affect us today.

Once the U.S. entered the war and instituted the draft, the military first needed to evaluate millions of men to ensure an acceptable level of physical and mental fitness using new scientific techniques to test and analyze America's draft-age population. 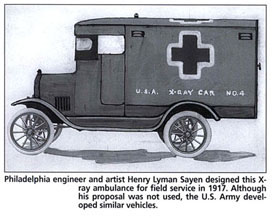 Related items in the collection include several photographs of soldiers in home-front facilities being subjected to a battery of new tests to quantize physical and mental aptitude--ensuring that they were as prepared as possible for the rigors of the front line.

The data these tests produced enabled the first large-scale studies of the health of the American people and provided evidence for theories regarding racial, ethnic, and regional differences--leading to new ideas about health standards and disease prevalence and prevention.

Once on the battlefield, doctors and nurses faced much more violent challenges. In a pre-antibiotic era, efforts to prevent infection were at the forefront of wound management. Explosive shells created deep, lacerated wounds and drove bacteria-rich soil into the body. Medical staff experimented with a variety of antiseptics and techniques and made liberal use of anti-tetanus serum--one of few treatments available that could target a specific infectious disease. 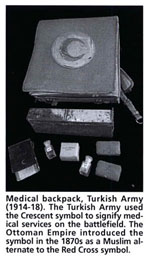 Items in the exhibit range from photographs of soldiers being evaluated at draft centers and home front hospitals to a front line motorized ambulance.

The military's reconstruction work included providing all amputees with artificial limbs. Although the nation had a thriving artificial limb industry, the military launched a program to design more economical, standardized, modern limbs. The initiative gave medical professionals oversight of prosthetic construction and use. In previous military conflicts, veterans received an allowance to purchase limbs directly from prosthetic makers. 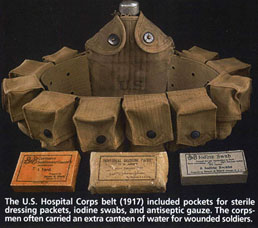 Caption: Used by the U.S. Army to assess the mental abilities of soldiers, this 1917 test required individuals to select appropriate objects to complete each scene. 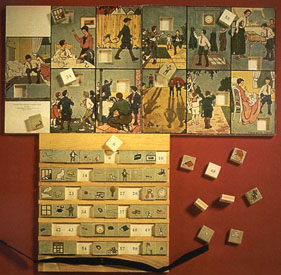 Caption: Above center: Sara Cox wore this uniform (c. 1917) as one of 20 nurses admitted to the Navy Nurse Corps. Known as the "Sacred Twenty," they were the first women to join the U.S. Navy. Both Army and Navy nurses wore the scarlet-lined blue cape, adapted from use by Red Cross nurses. It became a symbol of American nursing at home and abroad.

Caption: The Carnes artificial arm (1915) had a complicated mechanism that controlled the movement of wrist and fingers. Although expensive, it was quite popular in the U.S. and Europe at the time of the war.

Caption: ID card (1918) for "Roentgenologist" Maurice C. Wentz--the title derives from X-ray discoverer Wilhelm Rontgen. Wentz was one of 700-plus men trained in X-ray techniques by the U.S. Army.

Caption: Philadelphia engineer and artist Henry Lyman Sayen designed this X-ray ambulance for field service in 1917. Although his proposal was not used, the U.S. Army developed similar vehicles.

Caption: Medical backpack, Turkish Army (1914-18). The Turkish Army used the Crescent symbol to signify medical services on the battlefield. The Ottoman Empire introduced the symbol in the 1870s as a Muslim alternate to the Red Cross symbol.

Copyright: COPYRIGHT 2017 Society for the Advancement of Education
http://www.usatodaymagazine.net/

Modern medicine and the great war