Women In HVACR Are Still a Rarity: More females are starting to make an impact on the industry.

At just about every HVACR conference, meeting, or event, the one comment made by most women is, "This is the one place where we don't have to stand in line for the bathroom." That's because at virtually every one of these gatherings, male attendees vastly outnumber females--something that gets noted smugly while walking past the long line for the men's restroom.

This is more than just anecdotal. According to the U.S. Bureau of Labor Statistics, only 2 percent of HVAC employees are women. That is certainly a tiny part of the industry, but that number has the potential to grow as more women begin to see the benefits of pursuing a career in HVACR.

One of those women is Rhonda Wiggins, who works as an HVACR instructor at Hennepin Technical College (HTC), which has campuses in Brooklyn Park and Eden Prairie, Minnesota. She never intended to work in the industry, but when she took a welding class in high school, she discovered that she had a natural aptitude for it.

"After high school, I attended a community college welding program, which led to a job with a mechanical contractor," she said. "Every experience going forward led to more and greater opportunities."

That said, being a woman in a male-dominated industry has not always been easy. Early in her career, she said clients would often address her male apprentice rather than her, as they assumed that he was the lead.

"Time and experience help tame the ego," she said. "Contractors have learned that women are excellent multi-taskers and are good at critical thinking."

After several years in the field, she started teaching HVACR, only to find that there were no female students in the program. In addition, at least one male student objected to having a female teacher and threatened to drop the class. He changed his tune after Wiggins told him that he had likely had other female instructors in the past, so why should she be any different.

Since then, more females have entered the program at HTC, including Amanda Crafts, who was interested in a career change after working for several years at an online retailer. When a friend suggested that she should consider working in HVACR, she was hesitant, but then she learned about the program at HTC and was encouraged that Wiggins was one of the HVACR instructors.

"I thought, well, there's at least one woman who made it in this career," she said. "Maybe she can be encouraging and become my mentor? And I'm thankful it worked out just like I had hoped. It's been great."

Wiggins was quick to compliment Crafts, noting, "Amanda graduated and remains successful as a pre-apprentice at a commercial refrigeration shop. She's going to be an asset to the trade." 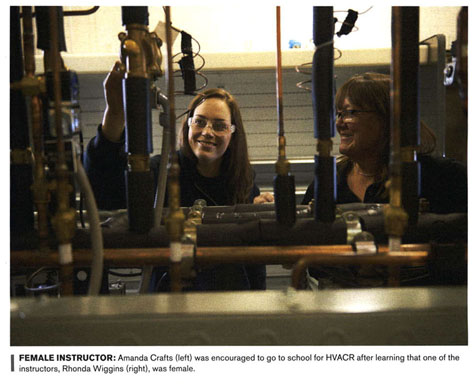 Other women are starting to discover the HVACR program at HTC as well, said Wiggins, noting that she had one female in her last class and has another one in her current class. She estimates around 14 women have been in the program since 2010, but she believes more could be interested, if only they knew about the industry and the opportunities it can provide.

"The trade is multifaceted, so there are many paths," she said. "You can diversify and specialize in so many different areas. Sometimes something is heavy, and it's nice to have someone really strong with you. Then there are places where a smaller woman might physically fit, whereas a big guy simply can't squeeze himself into position. It really comes down to awareness, both about the industry and the fact that women are more than capable of being successful in HVACR."

ALL ABOUT HEAT PUMPS

Sarah Moscatello, general manager of The Heat Pump Store, which has offices in Portland, Salem, and Eugene, Oregon, did not always dream of a career in HVAC. After college, she managed marketing campaigns for energy efficiency programs such as Energy Star, then took a job with Lennox, where she worked as a territory manager.

In 2011, she met Jeff and Jan Pratt, who were heavily invested in ductless heat pumps, as they believed the technology would be key to managing electricity use both locally and globally.

"Jeff saw ductless heat pumps as being really important to solving the electricity problem, but he met a lot of resistance from contractors and utilities when he started the business in 2007," she said. "Once my husband and I met them, we just believed in everything that he was saying, so we purchased part of the company and joined forces with the Pratts."

In 2015, Moscatello and her husband bought out the Pratts and started running the business themselves. Her husband now consults with contractors around the country on how to incorporate ductless into their HVAC contracting businesses, and she handles all the day-today operations of the business.

"Running a contracting business is exceptionally challenging--it's like riding a bucking bronco," she said. "There are so many moving parts and pieces that have to be organized in order for it to all work. But I have such an amazing staff and wonderful customers. It feels good to be a part of this industry."

Moscatello currently has seven installation technicians and sales of around $6 million a year. The company focuses only on ductless heat pumps, which was initially met with some skepticism, with many telling her that a company only offering one type of product could not be successful.

"But the way I think about it is Kentucky Fried Chicken just does chicken," she said. "What makes them strong is their ability to focus only on their specialty. We're the same. I see ourselves as really leading a revolution--a ductless revolution. It's what we know, and we know it better than anybody else. We've installed more ductless systems than anybody else in our market area."

Like most other contractors, finding experienced installation and service technicians has been a challenge for Moscatello, which is why she decided to stop looking for experience and instead focus on attitude. When she identifies individuals who have great attitudes, she offers to train them from the ground up, so they can be immersed in the company culture from day one.

"That has really worked well for us," she said. "There have been times when we have hired experienced technicians away from other companies, but that has not always worked out. I think a lot of the skills can be learned through training, but I want people who are as excited as I am about doing what we do. That's more important to me."

As for being a woman in HVAC, Moscatello does not feel that it has been a disadvantage at all. In fact, she believes it may even be a benefit, as people are often curious about meeting with a female in a male-dominated industry.

"This industry has been really good to me, and I just love it," she said. "It's so interesting, and there are new things happening all the time. And I have the privilege of helping people be comfortable and save money every day. It's wonderful to be part of an industry that literally improves lives."

Luisa Vesga and her husband always knew they wanted to run their own business. Both had a history in the trades, as Vesga's family owned a roofing company, and her husband worked as a sales engineer for a cooling tower company. Ten years ago, they took the plunge and opened Vmech Mechanical Contractors in Miami, Florida, which specializes in commercial HVAC installation and maintenance. 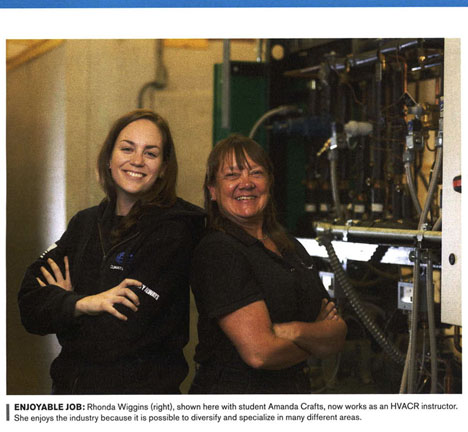 "I've always loved the construction industry and wanted to be part of it," she said. "HVACR is part of modern life --we cannot live without air conditioning and mechanical systems anymore, and I find this fact very rewarding. Also, as part of construction, HVACR allows us to be involved in projects that thrive on teamwork, communication, partnership, and even friendship to be successful."

Becoming president and CEO of Vmech was not an easy path for Vesga, who was born in Colombia and came to the U.S. when she was 16. English is not her primary language, and she had to develop a thick skin in response to those who found it hard to take direction from a woman.

"You must overcome many stereotypes and never take them personally," she said. "It's been challenging. I didn't go to school for engineering, and I was not given any money to start my company. On top of that, I'm a woman, I'm a mom, I had student loans, I had debt, and I started my company when I was only 26. I could've found many excuses, but instead, I found motivation."

Another big challenge for Vesga has been finding and retaining employees. To make her company attractive to new--and existing--employees, they pay above-market wages and share profits with employees. They also offer flexible schedules, so employees can balance their work and family time, and they allow their staff to work remotely.

"We believe in getting things done and not being on top of people," she said. "We are adults, and we all work to make our families better." 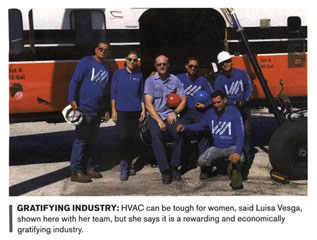 To maintain optimum flexibility in their operations, the company uses Jobber software, which can be accessed from any mobile device or internet connection. Vesga likes it because it offers one location where everyone can communicate, look at schedules, and track jobs as well as construction expenses. They were also able to develop their own accounting codes that can be used to report finances.

"I think this freedom is crucial in developing a good team," she said. "We share a very clear understanding of teamwork, and we respect each other. We really appreciate what everyone brings to the table, and we realize that it is for a common purpose. Working in this environment is very positive, and it allows people to appreciate the company and want to stay."

Vesga would like to see more women enter the HVAC industry, so that they, too, can discover what wonderful opportunities it can offer.

"Women already inside the industry should talk openly to other women about how capable we are and share with them our daily experiences, mistakes, and successes," she said. "We should encourage and inspire other women, which is why I'm always putting the word out there in any way I can." 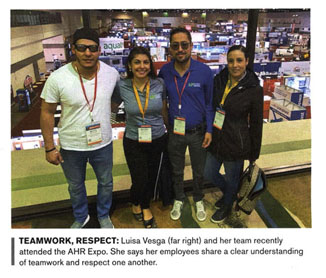 Caption: FEMALE INSTRUCTOR: Amanda Crafts (left) was encouraged to go to school for HVACR after learning that one of the instructors, Rhonda Wiggins (right), was female.

Caption: ENJOYABLE JOB: Rhonda Wiggins (right), shown here with student Amanda Crafts, now works as an HVACR instructor. She enjoys the industry because it is possible to diversify and specialize in many different areas.

Caption: GRATIFYING INDUSTRY: HVAC can be tough for women, said Luisa Vesga, shown here with her team, but she says it is a rewarding and economically gratifying industry.

Caption: TEAMWORK, RESPECT: Luisa Vesga (far right) and her team recently attended the AHR Expo. She says her employees share a clear understanding of teamwork and respect one another.