Silent sentries: an effective means of defense or of rendering territory impassable, land mines have always had one major drawback: they kill indiscriminately

"[The enemy has] discovered a new system of annoyance ... a series of [devices] let into the ground between our works and theirs ... filled with some composition which explodes immediately on being touched, so that any unfortunate meandering along the grass without knowing why, suddenly finds himself going up in the air like a squib with his legs and arms flying in different directions. We have had many men blown up by these things. ... At night you hear a sudden explosion and you know that some wretched fellow ... has trod on [one] and been blown up."

ALTHOUGH DATING from 1855 during the Crimean War, Col. Hugh Robert Hibbert's report of an insidious weapon seems as timely as today's headlines from Georgia or South Ossetia. Certainly the menace presented by Hibbert's mystery weapon remains as terrifying to today's soldiers and non-combatants as it was to 19th-century warriors. Cheaply produced, difficult to detect, and equally difficult to neutralize, land mines, whether serving as so-called area denial weapons--to prevent an enemy from occupying or traversing territory--or tools of terror inflicted on civilians, are a potent and still-evolving threat on modern battlefields. 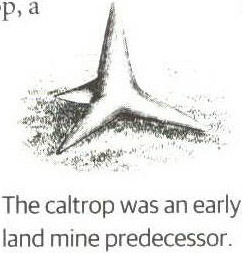 The earliest predecessor of land mines may have been the caltrop, a metal device resembling a child's toy jacks, with sharp points designed to pierce an animal's hoof or a human foot. They were employed around the time of Alexander the Great to deter cavalry charges. The Chinese used primitive gunpowder mines against the Mongols in the 1200s, and European engineers buried explosive-filled barrels that, touched off by a fuse, hurled scrap, debris, or flammable materials toward enemy sappers during siege warfare. While the Russians employed some mines during the Crimean War, mine use flourished in the American Civil War. Seeking novel weapons to even the odds between the less-industrialized South and the Union, the Confederates experimented with land and naval mines, then called "torpedoes." The South used land mines in the Union's 1862 Peninsula campaign, in the defense of Fort Wagner outside Charleston, and at Forts McAllister and Fisher near war's end. Some of the mines were purpose-made, but most were modified artillery shells. 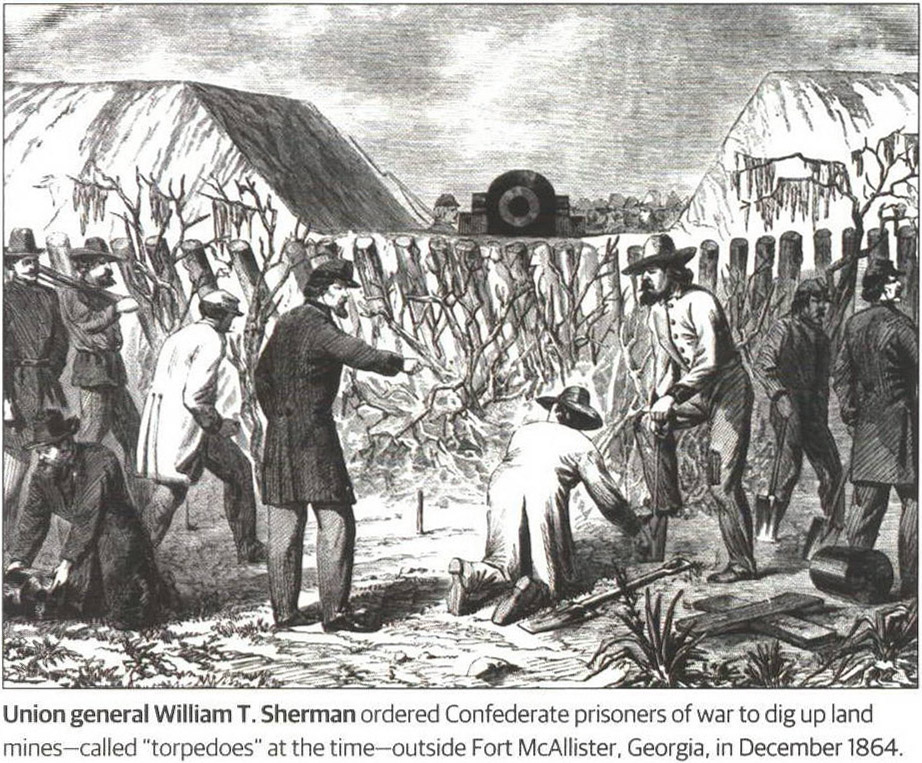 From their first use, the psychological potency of land mines was immediately apparent. One soldier who fought at Fort Wagner wrote that mines "attack both matter and mind." Infuriated by what he regarded as a perfidious form of combat, Gen. George McClellan raged that mine warfare was "the most murderous and barbarous thing I ever heard of." William Tecumseh Sherman, underscoring his viewpoint, forced Southern POWs and local civilians into mine-clearance duty during his March to the Sea. Even prominent Confederate generals were appalled by their latest weapon: James Longstreet opined that land mines were not "a proper or effective method of war." Undoubtedly speaking for many in the ensuing years, one Confederate exclaimed while negotiating one of his own side's minefields outside Yorktown: "This is barbarism!"

While some purpose-built land mines were used in World War I, most mines employed in that conflict were field expedients rigged from artillery or mortar shells. Two overall types emerged in the 1930s: antipersonnel and antitank. Generally pressure-activated, the antitank mine was intended to cripple a vehicle by blowing off a track or wheels, or for smaller vehicles, by causing catastrophic damage. The 1929 German Teller (plate) mine is representative of modern antitank mines. The 13-pound, cylindrical Teller was activated by only 275 pounds of pressure and was fitted with devices to detonate the mine if someone attempted to disarm it. (More recent types, known as full-width attack mines, are activated by a "tilt rod" that triggers the fuse when bent by a vehicle passing over it.)

ORIGINALLY USED AS defensive tools to keep an enemy from clearing one's own antitank minefields, antipersonnel mines took on a potent role of their own. Early antipersonnel mines ranged from grenade-like, fragmenting models, such as the Soviet POMZ still found worldwide, to the terrifying German S-mine (Schrapnellmine) of World War II. This diabolical device earned the nickname "Bouncing Betty" from Allied troops. When triggered, a small charge launched the S-mine three to five feet out of the ground; then the mine itself, filled with more than 300 ball bearings, exploded, shredding the torso and extremities of any bystander within 20 yards. The S-mine was widely regarded by Allied infantrymen as the most hated German weapon of World War II. One American lieutenant declared it "the most frightening weapon of the war, the one that made us sick with fear." 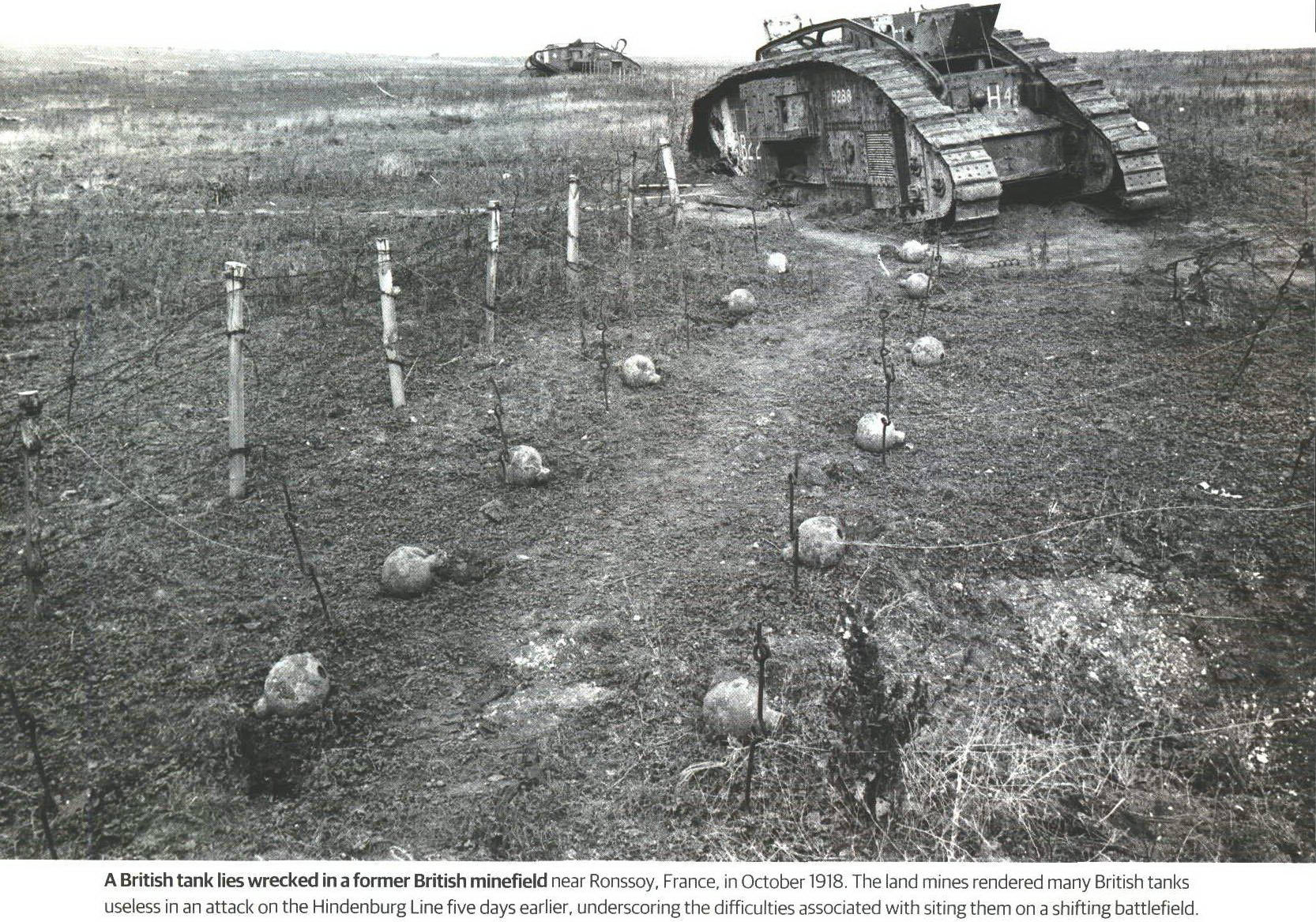 The introduction of electromagnetic mine detectors was countered by use of nonmetallic and low-metallic mines, including ceramic antitank mines and the German Schu (shoe) antipersonnel mine. The Schu was a cheap wooden-boxed mine whose only metal components were in its fuse, yet it packed enough explosive power to obliterate a soldier's foot or leg. The Germans often intermixed Schu and S-mines, making the labors of Allied sappers even more nerve-racking.

Both the Allies and Axis sowed mines profusely as integral elements of their defensive preparations. Anticipating the Germans' Kursk offensive in 1943, the Red Army planted 2,400 antitank and 2,700 antipersonnel mines per mile to channel German movements into well-prepared killing zones. In North Africa, Field Marshal Erwin Rommel's Panzerarmee Afrika, forced on the defensive, planted the "Devil's Gardens" outside El Alamein, where 1,000 mines were laid daily. Some 500,000 had been emplaced by the time Lt. Gen. Bernard Montgomery launched his offensive. Following his posting to France, Rommel envisioned a belt of some 20 million mines along the coast to strengthen the Atlantic Wall. Before D-Day, his forces had successfully emplaced 4,193,167 and had produced another 1,852,820 improvised mines. In Italy, the Germans' use of antipersonnel mines to thwart the crossing of the Rapido River by the U.S. 36th Infantry Division in January 1944 provided a classic example of the defensive use of land mines, inflicting an enormous toll in men and boats, and S and Schu minefields helped hem in the Allies at Anzio's beachhead.

Due to land mines' long-term efficacy and the fact that today's retreating defenders may become tomorrow's advancing conquerors, armies quickly learned it was imperative to prepare and maintain accurate minefield markers and maps. Most Westernized military forces made these aspects a key element of training and doctrine, and adherence to these procedures became an expectation under the laws of land warfare. Although the Allies and Germans undertook painstaking efforts to record many minefields, not all were cleared after the fighting moved on. Despite the passage of more than 60 years, these long-lost minefields still claim victims today in nations such as Libya, Egypt, and France. 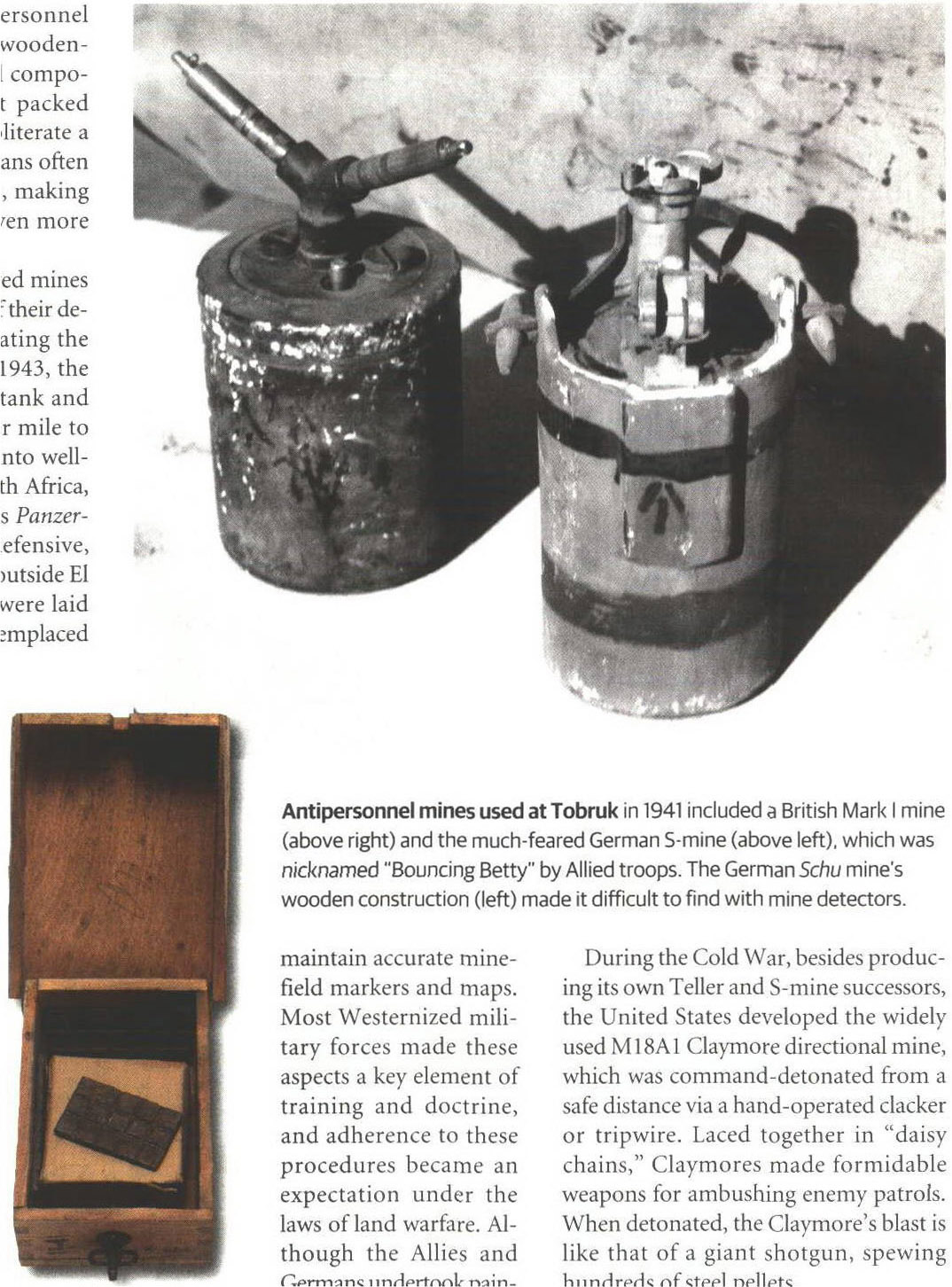 During the Cold War, besides producing its own Teller and S-mine successors, the United States developed the widely used M18A1 Claymore directional mine, which was command-detonated from a safe distance via a hand-operated clacker or tripwire. Laced together in "daisy chains," Claymores made formidable weapons for ambushing enemy patrols. When detonated, the Claymore's blast is like that of a giant shotgun, spewing hundreds of steel pellets.

To delay a threatened Warsaw Pact armored blitz into Western Europe, the Americans developed area denial mines that could be rapidly scattered. Air-delivered versions of these were dropped extensively on the Ho Chi Minh Trail during the Vietnam War.

By the 1970s, arms manufacturers marketed a host of inexpensive plastic mines with very low metal content. Up to 10 million mines were produced annually worldwide by the 1990s. As regimes with scant resources and little training increasingly acquired mines, Western military norms requiring mapping and marking of minefields fell by the wayside. 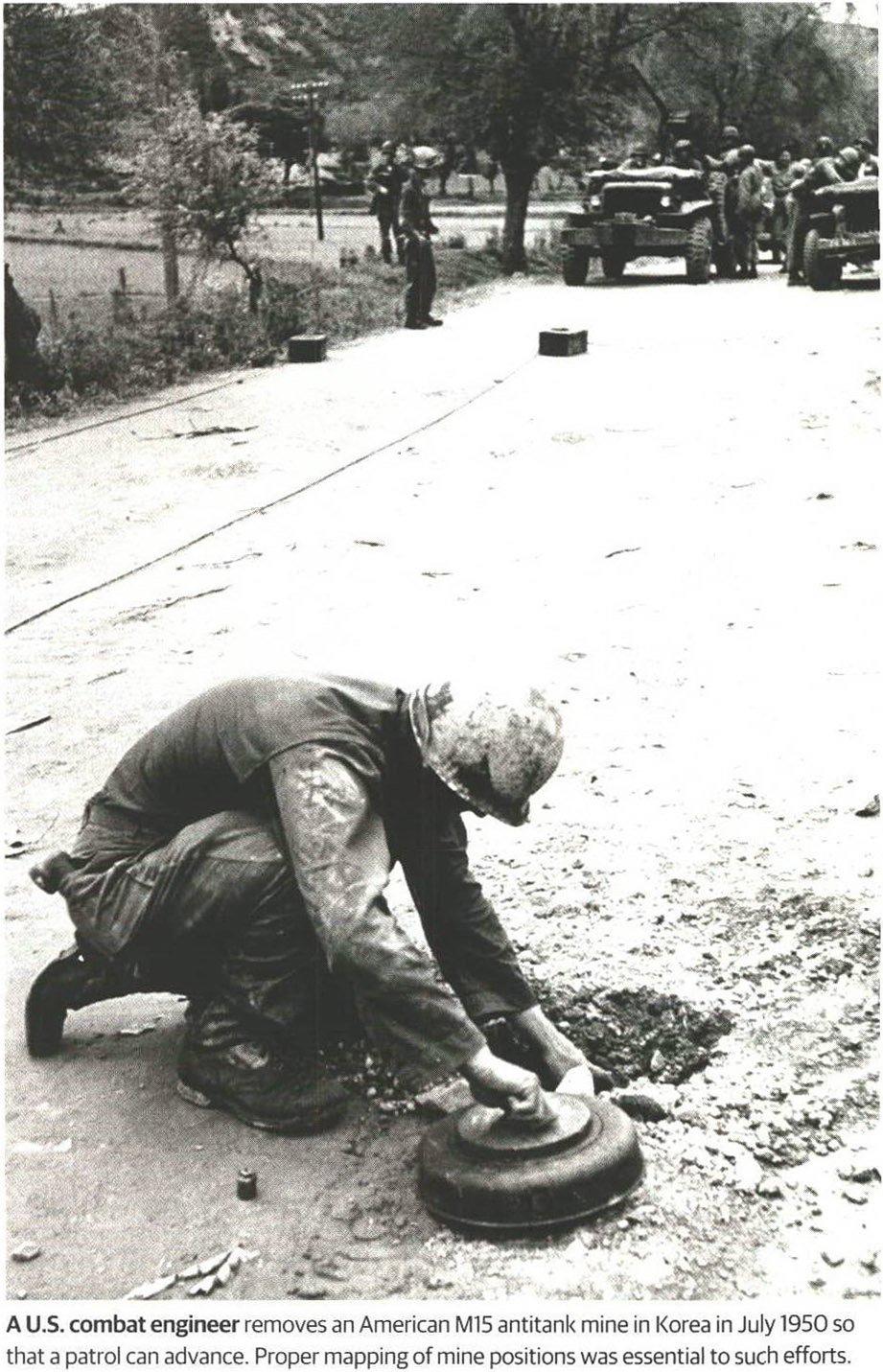 THE FIRST COMBATANT to capitalize on new forms of land mine warfare was the Soviet Union, in Afghanistan. Soviet interdiction efforts against the mujahideen relied extensively on mines to render vast portions of Afghanistan uninhabitable. Although U.S. forces had pioneered the use of scattered mines in Vietnam, the Soviets used these weapons indiscriminately and without regard to civilian life or property. They liberally dispersed at least 10 million mines--including the airdropped PFM-1 "butterfly" or "green parrot," which looked to children like a plastic toy--killing at least 25,000 Afghans during the 1979-1989 war and crippling thousands. This "terror mining" campaign set the stage for the expanded use of land mines worldwide as guerrilla forces followed the Soviets' example, converting mines from traditional defensive tools into long-term scorched-earth weapons.

Much as they had appealed to the Confederates, mines were prized by insurgent forces as weapons that packed a punch disproportionate to their size and low cost. During the Angolan civil war, both sides sowed mines to sever access to arable land and to strangle transportation. American, Khmer Rouge, and Vietnamese forces infested Cambodia with four million mines--one for every two Cambodians. Unlike in Kuwait, where the Iraqis tried to adhere to legal norms by mapping their minefields, Saddam Hussein's troops mined Kurdish territories with reckless abandon. In the words of one expert: "The Iraqis laid and abandoned these millions of mines to make large areas of Kurdistan unusable for all time." At least 56 nations have now been heavily mined, including Colombia, El Salvador, Nicaragua, Libya, Egypt, Sudan, the Falklands, Somalia, Serbia, Croatia, Bosnia-Herzegovina, Georgia, Iran, Laos, and Vietnam--all with appalling consequences to civilian populations whose medical systems are often ill-equipped to cope with the victims.

Are land mines still legitimate weapons of war? The 1980 Protocol II to the United Nations' Conventional Weapons Convention makes illegal the indiscriminate use of any weapons that cause "unnecessary suffering," or the intentional use of any weapon against civilians. Due to the increasingly profligate usage of antipersonnel mines against noncombatants, international efforts were pursued to tighten the legal restrictions on at least this variety of land mine. These resulted in 1996 amendments to Protocol II and in the 1997 Ottawa Treaty intended to prohibit the use, sale, and stockpiling of antipersonnel mines. Concerned that such a treaty would substantially impair South Korea's defense along the heavily mined Demilitarized Zone, the U.S. government has steadfastly refused to sign the Ottawa Treaty.

Although not land mines per se, the ubiquitous improvised explosive devices (IEDs) faced in Iraq and Afghanistan--which can function much like Claymore mines--were pinpointed by Gen. John Abizaid as the single greatest source of U.S. casualties in Iraq. Their apparent success underscores a crucial fact: While mine locating and disposal technology has advanced beyond probing with bayonets and sweeping with electronic mine detectors, mines and their cousins still have an enormous capacity to impede operations and inflict casualties.

Active countermeasures such as armored combat earthmovers, mine plows, flail vehicles, Bangalore torpedoes, and explosive "snakes" work best for large minefields, less so for randomly sowed mines and carefully sited IEDs. Passive defensive measures such as mine-resistant ambush-protected vehicles (MRAPs) have their limitations as well. The IEDs' utilization in Iraq and Afghanistan ensures that mines and their kindred will exercise a baleful presence during the 21st century, and that the battleground remains multidimensional, extending beyond the air and surface to what lies beneath.