A new school year has started, and "No Vaping" signs have popped up in middle and high schools. Schools take vaping seriously and many confiscate vaping materials and impose disciplinary actions. Vaping with a pod system is growing swiftly among Canadian teens, and addiction experts are worried.

It's "a wonderful way of delivering recreational drugs," says David Hammond, a professor at the University of Waterloo's School of Public Health and Health Systems.

Adding to existing concerns, a new vaping risk has emerged. The US Centers for Disease Control and Prevention reported on a new "severe pulmonary disease" that appears to be related to vaping. Close to 500 cases have been reported, and the death toll continues to increase, with six confirmed victims as of Sept. 11.

A preliminary report published in the New England Journal of Medicine found that those affected are predominantly healthy young males, 80% of whom had vaped tetrahydrocannabinol (THC). Contaminants, either in THC or other substances vaped with e-cigarettes, are likely the cause of this potentially fatal lung disease, Hammond suggested in a BMJ editorial.

There are no reported cases of the disease in Canada, but health officials are in surveillance mode. The new lung disease is not the only scary adverse effect of vaping; an acute nicotine overdose syndrome has also been identified.

Vaping pods contain nicotine salts, which make it easier to inhale high concentrations of nicotine without an acrid aftertaste. Before the popular vaping product Juul hit Canadian shelves in 2018, most e-cigarettes in Canada had nicotine concentrations of 1%-2%. The concentration among Juul's offerings can be as high as 5%.

The high nicotine concentration with no accompanying eye or throat irritation has allowed users to become "nicsick" or to "nic-out" (vaping until they pass out). It involves vaping a pod (or more) nonstop for 10 minutes or so, in a new variant of chugging beer.

"They develop an acute toxicity syndrome to nicotine ... It's very violent and involves intense abdominal pain, repeated vomiting with nausea, headaches, palpitations, uncontrollable shaking and an incapacity to concentrate on anything that can last for many hours," says Dr. Nicholas Chadi, a specialist in adolescent and addiction medicine at Sainte-Justine University Hospital Centre in Montreal.

In the US, negative behaviours usually related to addiction have been associated with vaping high-concentration pods. According to Chadi, animal studies suggest that the long-term effects of highdose nicotine exposure on the adolescent brain are similar to those of alcohol or cannabis, with a decrease in memory and attention capacities.

The risk of becoming addicted to e-cigarettes also seems to have a dose-effect association. "If you are vaping daily, if you vape high concentrations of nicotine ... you are more likely to self-report being addicted to vaping nicotine," says Robert Schwartz, a senior scientist at the Centre for Addiction and Mental Health in Toronto.

A recent study led by Hammond showed that 37% of Canadians age 16-19 tried vaping in 2018, compared to 29% in 2017. "In the world of addiction, we rarely see trends as important and developing that quickly," says Chadi.

Health experts are also concerned that cannabis pods are coming to Canada in a few months, part of the legalization process that will also include edibles. "We know that about a third of teens who are vaping are already vaping cannabis, and I would not be surprised to see a significant increase in cannabis vaping with the legalization of those pods," says Chadi.

"It's like a sledgehammer on a developing brain," adds Chadi.

According to Hammond, there are several reasons for the strong attraction to new vaping products among youth. "Nicotine is a powerful drug when it's delivered effectively," he says. "But we have a double problem, where we have this great new drug delivery system that is seen as fresh, modern and sleek." 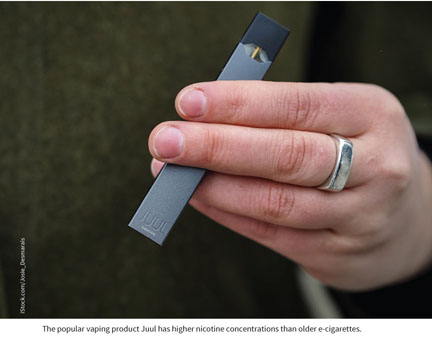