The only difference between a diamond and a lump of coal is that the diamond had a little more pressure put on it.

One of the most valuable gifts you can give your child is the ability to cope well with stress, and to perceive it as an opportunity for creative problem-solving or personal development.

Stress is unavoidable, even for children. Positive stress, called eustress, motivates and invigorates us, and we often think of it as "excitement". Negative stress, or distress, triggers anxiety as opposed to excitement, and can impair clear thinking.

Negative stress is the diamond maker, though. It can act as the pressure that causes us to change how we perceive the world. If we feel enough pain, we are strongly motivated to figure out how to relieve that pain. By changing our perception we can develop incredible insight, unlimited patience and unconditional acceptance of others and ourselves. That doesn't mean that we unconditionally accept inappropriate behavior, rather that we accept and honor everyone's innate human worth. There are some situations that are dangerous, and children need to be protected, and taught how to recognize them and safely extract themselves. And sometimes they need to fight for their own rights (not necessarily physically).

Robert Louis Stevenson said: "Life is not a matter of having good cards, but of playing a poor hand well." To stress proof our children, we need to teach them how to play poor hands well. One of the best ways is to show them how to take something stressful or negative and look at it in terms of advantages and opportunities, or in some way to see it in more positive or even neutral terms. This is called "reframing".

The person who learns how to quickly reframe stress will feel more empowered, regardless what obstacles life places before them. Even the most severe stress, perhaps caused by an accumulation of losses, can be the source of incredible personal and spiritual growth for them. They will feel those losses, and will certainly grieve them. More importantly, eventually they will find a way to use those experiences to enhance and enrich their lives.

Here's an example of reframing I found a few years ago (source unknown): A man and his two young children were riding a city bus late in the afternoon. The children were constantly running up and down the aisle, yelling at each other. The man seemed oblivious to their activity. One woman was bothered by their behavior, and tapped the man on the shoulder. She said, "Don't you see that your children are bothering the other passengers?" He replied, "Oh, yes, I guess they are." He paused, and with tears in his eyes said: "We just came from the hospital. Their mother died an hour ago, and I don't know how to comfort them." The woman instantly perceived the situation much differently, and was no longer bothered by the children's behavior. 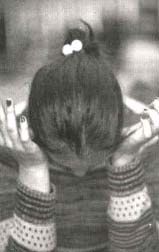 Even very young children can be taught how to reframe. For example, if a much-anticipated outing has to be postponed because of bad weather, help them acknowledge their disappointment, and then encourage them to think of other interesting and enjoyable things to do instead.

If a child is jealous of a younger sibling, help them to find advantages in being the big brother or sister, such as activities they alone can do with mom and dad.

For the older child, you can use stressful situations to help them develop insight into negative or hurtful behavior and the ability to be less judgmental. The instant they can do that, their stress will decrease significantly. They will feel less threatened and more grounded, making them less susceptible to mistreatment. They'll also think more clearly and be able to solve problems more creatively.

Sometimes refraining doesn't come easily. One way to quickly clear the emotional logjam triggered by stress (for both children and adults) is to use a type of acupressure for the emotions called Emotional Freedom Techniques, or EFT. I've used it with many of my clients to release stress and other negative emotions. Many people spontaneously reframe the previously stressful situation right after doing EFT. One client, a teenage figure skater, felt upset every time she fell when practicing a jump. Her distress was so strong that she was planning to abandon her dream of being in the Olympics. After doing EFT, she just shrugged it off, saying that she knows she has to fall in order to learn how to do the jump correctly. "It's no big deal," she said.

No big deal! She learned how to play a difficult hand well. That's a skill that will serve her well for the rest of her life.

Judy Neal is a consultant and trainer in Toronto, Ontario. She specializes in stress reduction and in helping people optimize their success in business, sports, academics, parenting and the creative & performing arts. She welcomes comments and questions. Contact her at judysalt@hotmail.com.