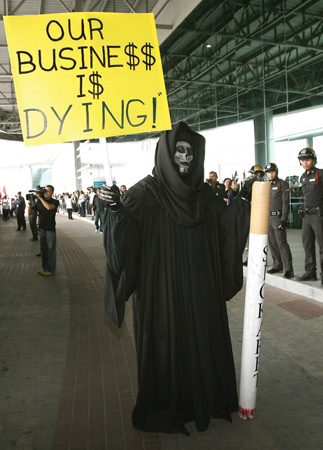 Tobacco (Nicotiana tabacum) is an herbaceous plant cultivated around the world for its leaves, which can be ignited and the smoke inhaled when rolled into cigars, or shredded for cigarettes and pipes. Tobacco can also be processed into a resin-like material that is placed into the mouth in contact with the gums (chewing tobacco) and can be ground into an inhalable or oral powder called snuff. The purpose of these activities is to derive the effects of the addictive tobacco compound called nicotine.

The tobacco plant is fast-growing with a stem from 4-8 feet (1-3 m) in height. Native to the Americas, tobacco was first cultivated by Native Americans for the same purposes as the present day. Christopher Columbus documented this use. In contrast to many present-day tobacco users, American Indians of that era (as well as today) believed that tobacco possessed medicinal properties, and it was important in the ceremonies of the plains tribes.

Tobacco was introduced into Europe in the mid-1500s on the basis of these purported medicinal qualities. Tobacco culture by European settlers in America began in 1612 at Jamestown, and it soon became the chief commodity exchanged by colonists for articles manufactured in Europe.

The leading tobacco-growing countries in the world today are China and the United States, followed by India, Brazil, and Turkey, as well as certain countries in the former Soviet Union. Although about one-third of the annual production in the United States is exported, the country also imports about half as much tobacco as it exports. The leading tobacco-growing state is North Carolina, followed by Kentucky, South Carolina, Tennessee, Virginia, and Georgia.

Nicotine occurs in tobacco along with related alkaloids and organic acids such as malic acid and citric acid. Nicotine content is determined by the species, variety, and strain of tobacco; it is also affected by the growing conditions, methods of culture and cure, and the position on the plant from which the leaves are taken. Tobacco is high in ash content, which can range from 15-25 percent of the leaf. Flue-cured tobacco is rich in sugar, and cigar tobaccos are high in nitrogenous compounds but almost free of starch and sugars.

Most tobacco products are manufactured by blending various types of leaves, as well as leaves of different origins, grades, and crop years. Cigarette manufacturers usually add sweetening preparations and other flavorings, but the preparation of tobaccos for pipe smoking and chewing is as varied as the assortment of products themselves. Snuff is made by fermenting fire-cured leaves and stems and grinding them before adding salts and other flavorings. Cigars are made by wrapping a binder leaf around a bunch of cut filler leaves and overwrapping with a fine wrapper leaf.

In the United States and elsewhere, stems and scraps of tobacco are used for nicotine extractions. They can also be ground down and made into a reconstituted sheet in a process like papermaking, which is used as a substitute cigar binder or wrapper or cut to supplement the natural tobacco in cigarettes.

Despite the legality of tobacco, it is harmful, and has been linked conclusively to a number of cancers including lung cancer. An estimated 480,000 Americans die each year from tobacco-related cancer, according to the National Cancer Institute. Whereas most of those who die are smokers, secondhand exposure to tobacco smoke kills about 38,000 Americans each year. Scientists have linked tobacco smoking to greatly increased risks of heart attack, as well as congestive lung diseases such as bronchitis and emphysema. Smokeless forms of tobacco (chewing tobacco and snuff) are no less dangerous, and cause a far higher risk of cancer of the mouth. Globally, tobacco use results in more than 5 million deaths per year, and researchers estimate that it will cause 8 million annual deaths worldwide by 2030.

Whereas the percentage of Americans who smoke has been decreasing since the 1960s, almost 20 percent of U.S. adults and 23 percent of high school students smoke. Despite significant declines in U.S. adult and youth smoking rates since the late-1990s, smoking rates have declined far more slowly since 2004. In fact, by 2015, the CDC (Centers for Disease Control and Prevention) was reporting that while smoking traditional cigarettes was still in decline among young people, use of e-cigarettes among students under 18 was rapidly increasing. In response to government surveys, conduced in 2015, 16 percent of high school students and 5.3 percent of middle school students said they were current users of e-cigarettes, making electronic nicotine delivery systems (ENDS) the most common way young people use tobacco.