In 1898, British author H. G. Wells (1866–1946) wrote his famous novel, The Time Machine. In this novel, a young Victorian invented a device that allowed him to travel into the future or the past. He travels eight hundred thousand years into the future and finds a society very different from the one he was accustomed to, inhabited by 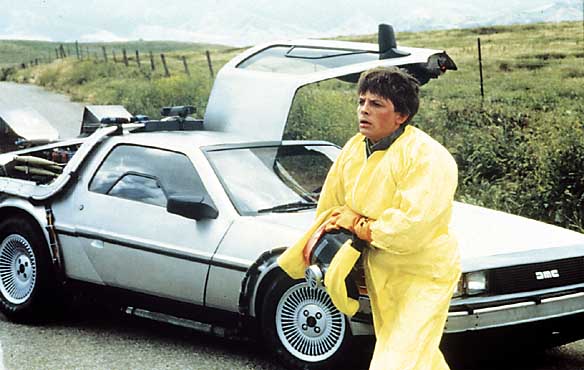 the Eloi and the Morlocks. The Eloi appear to live an idyllic life, but the time traveler discovers that there is a horrible price they must pay.

Writers such as Wells used fiction to comment on their own society. However, serious paradoxes raised by time travel have led many to contend that such actions are impossible. For example: what if a time traveler accidentally killed his own father, long before he was born? British physicist, mathematician, and astronomer Isaac Newton (1643–1727) thought of time as an arrow, traveling in a straight line at constant speed. However, German-born American theoretical physicist Albert Einstein (1878–1955) theorized in 1916 that time was much more variable. To Einstein, time could slow down in strong gravitational fields, and speed up further away, or when involved with an object traveling at high speed. The faster people travel through space, the slower time is perceived, at least to a stationary observer. Einstein's equations of general relativity allow several varieties of time travel. For example, in a rotating universe, moving against the direction of rotation would be moving backwards in time. In an expanding universe, such a property is theorized not to exist.

A more interesting time travel possibility is presented by rapidly rotating, massive black holes. Such a rotating black hole (unlike a static, or fixed, black hole) does not have a spherical event horizon (it is considered to be a non-spherical, distorted event horizon), but (mathematically) appears to be more similar to the shape of a ring. Moving through the center of the ring might lead to a different place and time—a wormhole through space. Nevertheless, currently known physical processes are unable to produce a black hole with enough rotational speed for this to happen. Even if it did occur, such an object might be unstable and it might collapse if anything did pass through its center.

If time travel is possible after all, how do humans deal with the paradoxes? One way is to postulate the existence of alternate realities. Quantum mechanics teaches scientists that a given system can exist in two different states, and the particular state a system is currently in is not known until scientists examine such a system. Therefore, if a person were to travel back in time and prevent, say, the assassination of U.S. President John F. Kennedy (on November 22, 1963), then that person would have created a parallel universe. The action would have changed the past for someone else (Kennedy, in this case), but not for the person going into the past nor for anyone else.

black holes
objects so massive for their size that their gravitational pull prevents everything, even light, from escaping