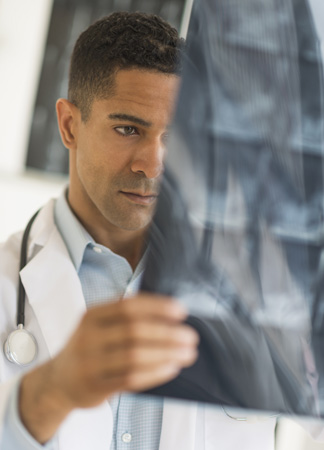 Radiology is a branch of medical science that uses x rays and other forms of technology to image internal structures in the body. For nearly 80 years radiology was based primarily on the x ray, but since the 1970s several new imaging techniques have been developed. Some, like computed tomography, integrates x-ray and computer technology. Others, like ultrasound and magnetic resonance imaging are nonradiologic techniques, meaning they do not use x rays or other forms of radiant energy to probe the human body. Although radiotherapy based on the x ray has been used to treat cancer since the beginning of the twentieth century, most radiologists are primarily concerned with imaging the body to diagnose disease. However, interventional radiology is a rapidly expanding discipline in which radiologists work either alone or hand-in-hand with surgeons to treat vascular and other diseases.

The science of radiology was born in 1895 when Wilhelm Roentgen (1845–1923) discovered the x ray. The German scientist was studying high voltage discharges in vacuum tubes when he noticed that the Crookes tube he was focusing on caused a piece of screen coated with the chemical barium platinocyanide to fluoresce or glow. Roentgen quickly realized that he had produced a previously unknown type of invisible radiation. In addition, this radiant energy could pass through solids like paper and wood. He also discovered that when he placed a hand between the beam's source and the chemically coated screen, he could see the bones inside the fingers depicted on the screen. Roentgen quickly found that he could record the image with photographic paper.

Roentgen's discovery changed the course of medicine. With the ability to look inside the body without surgery, physicians had a new diagnostic tool that could actually locate tumors or foreign objects, like bullets, thus greatly enhancing a surgeon's ability to operate successfully. Roentgen called the new radiant energy x rays and, six years after his discovery, was awarded the Nobel Prize in physics.

How the x ray works

X rays are a type of radiant energy that occurs when a tungsten (a hard metallic element) target is bombarded with an electron beam. X rays are similar to visible light in that they radiate in all directions from their source. They differ, however, in that x rays are of shorter wavelength than ultraviolet light. This difference is the basis of radiology since the shorter wavelength allows x rays to penetrate many substances that are opaque to light.

An x ray of bones, organs, tumors, and other areas of the body is obtained through a cassette that holds a fluorescent screen. When activated by x rays, this screen emits light rays which produce a photochemical effect of the x rays on film. When light or x rays hit photographic film, a photochemical process takes place that results in the negative film turning black while the places not exposed to light remain clear. Images are obtained when the paper print of a negative reverses the image values. In the normal photographic process, an entire hand would be imaged because normal light cannot pass through the hand, thus creating the image on film. The desired x-ray image is obtained because x rays pass through outer tissue and are absorbed by bones and other structures, allowing them to be captured on film.

Over the years, radiology has fine tuned this approach to develop different x-ray devices for imaging specific areas of the body. For example, mammography is the radiological imaging of a woman's breast to determine the presence of diseases like breast cancer. Another major advance in x-ray technology was the development of radiopaque substances. When injected into the body, these substances, which do not allow x rays to pass through them, provide images of structures that would otherwise not appear on the x ray. For example, angiography is the imaging of blood vessels after injecting them with a radiopaque material. Myelography is the imaging of the spinal cord with x rays after injecting a radiopaque substance into a membrane covering the spine.

Ultrasound was the first nonradiologic technique used to image the body. Ultrasound in radiology stems from the development of pulse-echo radar during World War II (1939–1945). First used to detect defects in metal structures, ultrasound, or sonography, became a useful diagnostic tool in the late 1950s and early 1970s. As its name suggests, ultrasound uses sound waves rather than electromagnetic radiation to image structures.

A common use of ultrasound is to provide images of a fetus. A sound transmitter is used to send waves into the body from various angles. As these waves bounce back off the uterus and the fetus, they are recorded both on a television screen and in a photograph. With the more advanced Doppler ultrasound, this technology can be used for everything from imaging atherosclerotic disease (the thickening of arteries) to evaluating the prostate and rectum.

Computers and the new era of radiology

Except for ultrasound, from the day Roentgen discovered the x ray until the early 1970s, radiology relied solely on the application of x rays through refined radiographic techniques. These applications were limited by the x ray's ability to discern only four different kinds of matter in the body: air, fat, water (which helps make up tissue), and minerals (like bone). In addition, while the x ray images bone well, it cannot image what lies behind the bone unless angiography is used. For example, a standard x ray could reveal damage to the skull but would not reveal tumors or bleeding vessels in the brain unless they calcified or caused changes to the skull. Although the development of angiography allowed scientists to view the arteries in the brain, angiography is somewhat painful for the patient and does not reveal smaller but still serious tumors and lesions.

The high-tech era of radiology coincided with rapid advances in computer technology. By using computers to analyze and interpret vast quantities of data, scientists began to develop new and better ways to image the body. Imaging processes like computed tomography, positron emission tomography, magnetic resonance imaging, and single photo emission computed tomography all rely on the computer. With these techniques, radiologists are able to diagnose a wider range of diseases and abnormalities within the body.

In 1972, radiology took a giant step forward with the development of computed tomography (CT). Although still relying on the x ray, this radiographic technique uses a computer to process the vast amount of data obtained from an electronically detected signal. Since different tissues will absorb different amounts of x rays, CT passes x-ray beams through the body at different angles on one specific plane, providing detailed cross sections of a specific area. This information is scanned into a digital code which the computer can transform into a video picture. These images are much superior to conventional x-ray film and can also be made into three-dimensional images, allowing the radiologist to view a structure from different angles.

As a result of this technology, physicians could view precise and small tissues in areas like the brain without causing discomfort to the patient. CT also led scientists and engineers to conduct new research into how the computer could be used to make better images of body structures.

Although magnetic resonance imaging (MRI) dates back to 1946, it was used primarily to study atoms and molecules and to identify their properties. In 1978, the first commercial MRI scanner was available, but it was not until the 1980s that MRI became a useful tool for looking into the human body. MRI works by using a huge magnet to create a magnetic field around the patient. This field causes protons in the patient's body to “line up” in a uniform formation. A radio pulse is then sent through the patient, which results in the protons being knocked out of alignment. When the radio pulse is turned off, the protons create a faint but recordable pulse as they spin or spiral back into position. A computer is used to turn these signals into images.

This nonradiological technique has many benefits. It does not use ionizing radiation, which can be harmful to humans. In addition, it has superb low-contrast resolution, allowing radiologists to view and diagnose a wider range of diseases and injuries within the patient, including brain tumors and carotid artery obstructions. More recent advances in MRI technology are allowing scientists to look into how the brain actually functions.

Positron emission tomography (PET) and single photon emission computed tomography (SPECT) are two more technologies that rely on computers. PET has been used primarily to study the dynamics of the human body. In other words, not just to see images, but to understand the processes that go on in certain areas of the body. For example, radioisotopes (naturally occurring or artificially developed radioactive substances) injected into a patient can be imaged through PET computerized technology, allowing scientists to watch how metabolism works in the brain and other parts of the body. With this technology, scientists can watch glucose metabolism, oxygen consumption, blood flow, and drug interactions.

SPECT uses radionuclides (radioactive atoms) to produce images similar to CT scans, but in much more precise three-dimensional images. The use of dual cameras, one above and one below the patient, enables radiologists to obtain simultaneous images that are then processed by computers to provide improved resolution of a structure in less time. In addition, small organs, like thyroid glands, can be better imaged for both diagnosis and research.

Interventional radiology is one of the more recent developments in radiology. As a subspecialty, it has evolved from a purely diagnostic application to a therapeutic specialty involving such procedures as balloon dilation of arteries, drainage of abscesses, removal of gallstones, and treatment of benign and malignant structures.

Radiant
Anything that produces rays, such as light or heat.
Radioisotopes
An unstable isotope that emits radiation when it decays or returns to a stable state.
Radionuclide
Radioactive or unstable nuclide.
Radiopaque
Anything that is opaque or impenetrable to x rays.
Radiotherapy
The use of x rays or other radioactive substances to treat disease.

Interventional radiologists, who often work closely with surgeons, use a number of imaging tools to perform procedures like image-guided needle biopsy (removal of tissue or fluids) and percutaneous (through the skin) needle biopsy of thoracic lesions. These procedures rely heavily on the development of imaging technologies like CT and various instruments such as catheters and guide wires. Advantages of interventional radiology over surgery include reduced need for anesthesia, shorter time to perform procedures, and improved therapeutic results.