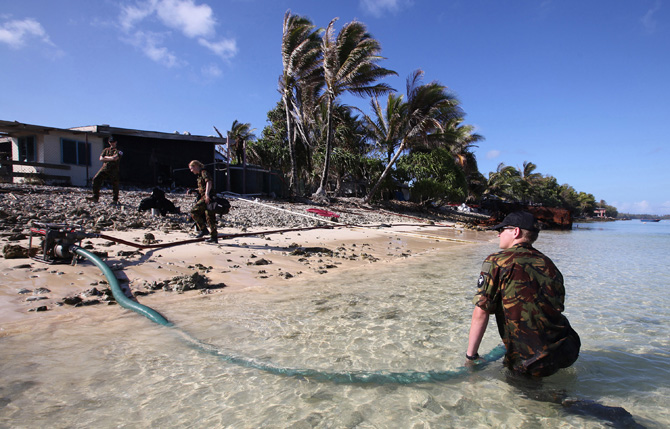 Strong scientific evidence suggests that the Earth's climate is changing as a result of human activity. Emissions of greenhouse gases, combined with human destruction of ecosystems that help remove greenhouse gases, are driving a sharp rise in greenhouse gas levels. This rise is creating an upward trend in global warming that can be distinguished clearly from Earth's natural cycles.

According to the Fifth Assessment Report (AR5) of the Intergovernmental Panel on Climate Change (IPCC), compiled by leading scientists and released in 2014, "atmospheric concentrations of the greenhouse gases carbon dioxide, methane, and nitrous oxide have all increased since 1750 due to human activity." In 2011, the concentrations of these greenhouse gases surpassed pre-industrial levels by about 40 percent, 150 percent, and 20 percent, respectively. They reached the highest levels in at least 800,000 years. The World Meteorological Organization estimated in 2013 that the globe average amount of carbon dioxide in the atmosphere was 396 ppm. In May 2019, the National Oceanic and Atmospheric Administration (NOAA) reported a new high average of 414.7 ppm.

Anthropogenic
Made by people or resulting from human activities.
Greenhouse effect
The warming of Earth's atmosphere due to water vapor, carbon dioxide, and other gases in the atmosphere that trap heat radiated from Earth's surface.
Greenhouse gases
Gases that cause Earth to retain more thermal energy by absorbing infrared light emitted by Earth's surface.

Climate is the average weather of a region over time. Temperature, winds, heat waves, cold snaps, rainfall, storms, and similar weather-related conditions are geographically narrower, short-term facets of broader, longer-term climate conditions. The average is determined after accounting for scientific error, seasonal effects, random variations of the jet-stream and weather, historical warming and cooling cycles, changes in solar irradiation, and such factors as fluctuations in El Niño and La Niña patterns.

Climate change itself is not new. Global and regional climates have been changing since Earth formed about 4.5 billion years ago. Ice ages and hot spells have gripped the planet for millions of years. Sudden warming and cooling periods have occurred in as little as a decade. Ice caps and jungles have spread and shrunk. Seas have risen and fallen by many meters.

However, the changes in global climate recorded in the last half-century are more drastic than any seen for more than 1,000 years. Moreover, instead of corresponding to natural cycles, the changes in global climate correspond to human activity. This includes the release of atmospheric greenhouse gases and dramatic population increases since the Industrial Revolution began in the late eighteenth century.

Ice core data play a vital role in assessing whether current greenhouse gas levels are truly exceptional or if they are simply at a high part of a natural cycle. According to AR5, "Concentrations of carbon dioxide, methane, and nitrous oxide now substantially exceed the highest concentrations recorded in ice cores during the past 800,000 years. The mean rates of increase in atmospheric concentrations over the past century are, with very high confidence, unprecedented in the last 22,000 years."

There are political activists, climate skeptics and deniers, and critics of the IPCC. They discount data supporting climate change and models used to predict change. They do not believe action needs to be taken until more is known. They are concerned that action might lead to economic instability. Because of the potential impact on basic aspects of security, health, and the global economy, climate change is one of the most contentious issues facing humanity. The well-being or survival of hundreds of millions of people may be threatened by rising sea levels, disrupted food production, extreme weather, and emerging diseases.

Much scientific data is available along with the consensus of experts that climate change outside of Earth's natural cycles is in progress. Moreover, a strong consensus in scientific data reveals this change is driven by anthropogenic (human) factors. Peer reviewed articles in academic journals show most climate scientists agree with the IPCC that human activity plays a major role.

Scientists tell critics who claim global warming has stopped that plateaus and minor reversions are expected. Many critics of global warming science point to the extremely high global average temperature reached in 1998 when arguing that warming has stopped or slowed. Such a "cherry picking" approach to data is invalid and is often deceptive of longer-term trends. Data collected from multiple sources show that each of the last three decades has been successively warmer on Earth's surface than any preceding decade since 1850.

NASA reported that average temperatures on Earth have become the warmest in almost 12,000 years. In terms of global averages, the 2010–2019 decade averaged 58.4°F (14.7°C) worldwide. This is 1.4°F (0.8°C) higher than the twentieth-century average. NASA reported that Earth was now about 2.2°F (1.2°C) warmer than at the beginning of the Industrial Revolution. This finding indicates that temperatures are likely to exceed global goals seeking to limit temperature increases to 2.7°F (1.5°C) since the Industrial Revolution.

Global warming and climate change trigger a host of relatively different consequences. These include more rain and snow in some places and less in others. It could bring more floods and droughts or increased melting of mountain glaciers and ice caps in many areas, but increased snowfall in others. These fluctuations explain why scientists prefer the phrase "global climate change" when speaking about the overall impacts of global warming.

Parts of Antarctica, North America, and Europe may even become cooler. They may see more snow as the world gets warmer and humidity levels increase. But local exceptions or short-term cool spells do not contradict the upward trend of global warming.

The IPCC reports are prepared by a global array of several thousand scientists and economists. When the IPCC released its Fourth Assessment Report on climate change in 2007, it declared that global warming was "unequivocal." The authors gave at least a 90 percent probability that humans were the cause.

The report had an unexpected impact on world opinion about climate change. It created a heightened sense of urgency to deal with the issue. The 2014 IPCC report reiterated the scientific consensus that humans are "extremely likely" to be the driving force behind climate change. According to the report: "Global surface temperatures are more likely than not to exceed 3.6 degrees Fahrenheit (2 degrees Celsius) compared to pre-industrial levels by 2100."

Climate change will likely have more a significant impact on the world's poorest countries. Such nations have fewer resources and less technological capacity to adapt or mitigate damage. The United Nations (UN) University Institute for Environment and Human Security estimated that the number of environmental refugees could rise to 150 million by 2050. Most of those refugees would be the result of climate change.

Biodiversity loss is also a concern. Animals and plants are increasingly endangered by a changing climate. In 2019, a report by the Intergovernmental Science-Policy Platform on Biodiversity and Ecosystem Services revealed that "around 1 million animal and plant species are now threatened with extinction." The report added that many extinctions will occur "within decades, more than ever before in human history." This includes "more than 40% of amphibian species, almost 33% of reef forming corals and more than a third of all marine mammals." The authors note that the situation can be reversed but that "transformative change" is required.

The Paris Climate Agreement was negotiated to hold carbon emissions to levels that would limit or prevent the most catastrophic perils predicted by climate change data and models. It entered into force in November 2016. All countries except Syria and Nicaragua signed the agreement. However, U.S. President Donald Trump (1946–) announced in June 2017 that his nation would withdraw from the agreement. He claimed the accord hurt U.S. businesses and workers. Despite Trump's actions, various U.S. states and cities pledged to work on meeting the emission targets. A Reuters poll conducted shortly after Trump's action revealed that 68 percent of Americans wanted the United States to lead the world in fighting climate change. Trump's decision received strong condemnation, both internationally and domestically.

In late 2018, the IPCC issued the Global Warming of 1.5°C report. It studied the impact that such a temperature increase would have on climate change. Scientists warned that quick and major action was needed to avoid major increases in sea level rise, coral bleaching, extreme weather, and other effects. At a UN meeting on climate and sustainable development in March 2019, speakers issued another dire warning. "Just over a decade is all that remains to stop irreversible damage from climate change." Participants were told that this is the last generation that can avert irreparable damage.