Factory farming is industrial-scale agriculture that depends upon rearing animals in large numbers, usually in confined spaces. It has become increasingly popular because technology has found ways of rearing animals for eggs, milk, and meat on a larger scale. The addition of vitamins to feed, so animals could be reared all year long indoors, and the routine use of antibiotics to stop the spread of infection in crowded conditions have been important landmarks in the development of the factory farm. Mechanization also helps factory farming run smoothly and boosts productivity. Factory farms differ in many ways from traditional agriculture, with their main aim being to produce as much food as possible at the lowest possible cost. Whereas intensive farming of this kind may help meet the growing demand for food, the continued existence of malnutrition around the world suggests it is not a complete solution.

Factory farming raises many animal welfare issues, with animals sometimes being mutilated to adapt them to their unnatural conditions of confinement. Use of antibiotics increases antibiotic resistance in humans. Factory farming also uses chemicals such as pesticides and fertilizers, which, along with animal waste, form a major pollution problem. In addition, factory farming concentrates food production in the hands of a few powerful multinational companies. Critics of factory farming suggest that buying local, free-range produce from family farms that are sustainable is the better, more environmentally friendly way of feeding the world.

Factory farming originated in the 1920s and was a spinoff of the discovery of vitamins A and D. It was realized that if these vitamins were added to animal feed, then large numbers of animals could be raised indoors all year round. However, such overcrowding increased the spread of disease. This problem was dealt with by routine dosing with antibiotics, once these drugs became available in the 1940s and 1950s. Further major developments of the factory farm included the use of mechanization and assembly line technology. In the early twenty-first century, factory farming is an intensive industry and far removed from the traditional image of agriculture.

The Environmental Protection Agency (EPA) defines a large factory farm, or concentrated animal feeding operation (CAFO) as one that has 1,000 cattle, 700 dairy cattle, 2,500 pigs over 55 pounds weight, or 125,000 chickens. A medium sized CAFO has between 300 and 999 cattle, or between 200 and 699 dairy cattle, 750 to 2,499 pigs, or between 37,500 to 124,999 chickens. What these facilities share is that they contain many animals in a confined space, often with little or no access to sunlight or fresh air. There is a danger that animals might fight one another, being in such close proximity. They are adapted to their conditions by modifications such as cutting off the beaks of chickens and turkeys, and amputating the tails of cows and pigs. Animals are fed low doses of antibiotics on a regular basis to ward off infection. They are also given hormones to promote rapid growth. The animals' waste may be handled with a liquid manure system, in which their urine and feces are mixed with water and held under the farm facility or outside in open-air lagoons. The main animals found in factory farms are cows, pigs, chickens, and turkeys, as well as sheep, goats, and rabbits.

Broiler chickens are raised in closely confined broiler houses instead of cages, and these are often unlit to discourage fighting among the birds. They grow at a very rapid rate, reaching their market weight in just a few weeks. These birds are selectively bred to be so heavy that it often is difficult for them to stand. Layer chickens supply about 95 percent of eggs in the United States. They are usually held in battery cages that are very small, with slanted wire floors. Greater egg production Page 255  |  Top of Articleis encouraged by constant exposure to light. Meanwhile, around 90 percent of all pigs raised for food are confined at some point in facilities that have automated water, feed, and waste removal. Dairy cows are often injected with bovine growth hormone, which increases their rate of milk production. They are often impregnated continuously to keep up the flow of milk.

Advocates of factory farming consider these approaches necessary to meet the growing demand for food. Factory farming, however, raises several animal welfare issues. Confining animals and depriving them of light and freedom is considered by many to be inhumane. There are also health issues in the repeated dosing of animals with antibiotics. In the United States, almost half of all antibiotics are used in factory farming. This practice has been linked to the spread of antibiotic resistance among humans. The presence of antibiotics in food creates a selective pressure, which favors the emergence of resistant strains of bacteria. 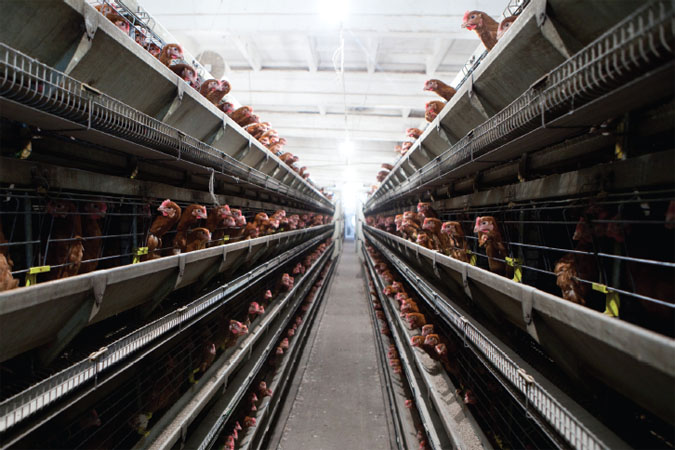 BROILER CHICKEN: A chicken intended for slaughter for food, the broiler chicken has been bred to have bigger thighs and breasts, as these are the most popular parts for consumption. Layer chickens are used to produce eggs and they may also be slaughtered for consumption when they stop doing so.

CONCENTRATED ANIMAL FEEDING OPERATIONS: A formal definition of a factory farm given by the United States Environmental Protection Agency. A CAFO is an operation that stables or confines and feeds or maintains more than the number of animals specified in a given list that includes cattle, pigs, and chickens. Time is an element, as a CAFO is a farm operating under factory conditions for 45 days, or more, in total in any 12-month period.

FREE RANGE: Animals that are permitted to graze or forage, rather than being confined, are known as free range animals.

Critics of factory farming advocate consumers looking for free-range products, such as eggs, which have come from operations that have higher standards of animal welfare. They also advocate buying local produce from organic and smaller, more sustainable family-run farms, which try to avoid the use of chemicals such as fertilizers, pesticides, hormones, and antibiotics. Factory farms are geared almost exclusively towards production of animal protein, which requires more resources than production of plant protein. Overall reduction of meat consumption may be a more realistic way of feeding the world than intensive factory farming.