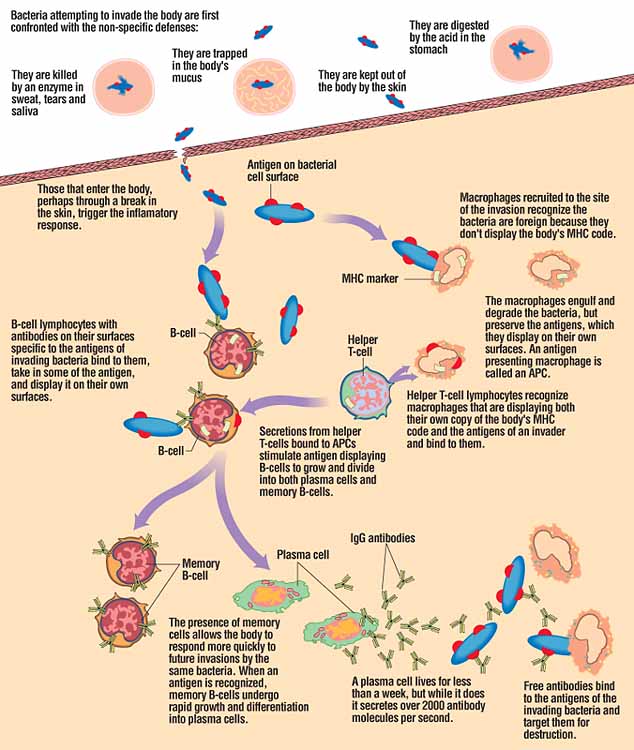 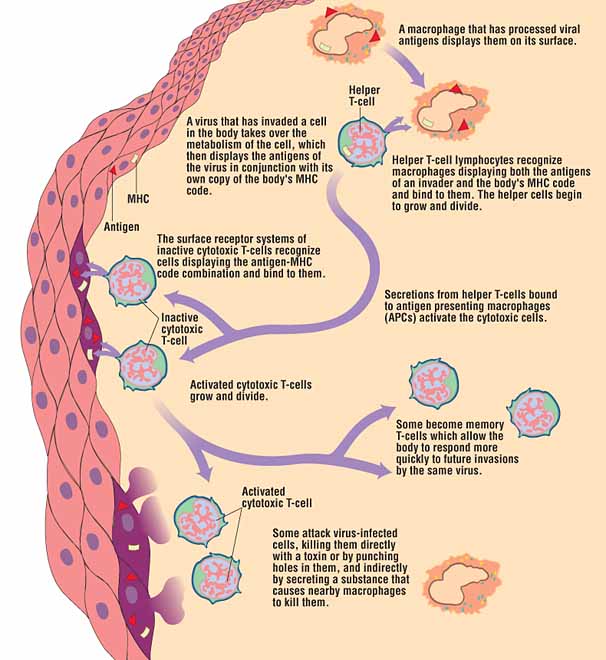 For the immune system to work properly, two things must happen: First, the body must recognize that it has been invaded by foreign microorganisms. Second, the immune response must be quickly activated before many body tissue cells are destroyed by the invaders.

The cell membrane of every cell is studded with various proteins that protrude from the surface of the membrane. These proteins are a kind of name tag called the major histocompatibility complex (MHC). They identify all the cells of the body as belonging to the self. An invading microorganism, such as a bacterium, does not have the self MHC on its surface. When an immune system cell encounters this non-self cell, it alerts the body that it has been invaded by a foreign cell. Every person has their own unique MHC. For this reason, organ transplants are often unsuccessful because the immune system interprets the transplanted organ as foreign, since the transplanted organ cells have a non-self MHC. Organ recipients usually take immunosuppressant drugs to suppress the immune response, and every effort is made to transplant organs from close relatives, who have genetically similar MHCs.

In addition to a lack of the self MHC, cells that prompt an immune response have foreign molecules (called antigens) on their membrane surfaces. An antigen is usually a protein or polysaccharide complex on the outer layer of an invading microorganism. The antigen can be a viral coat, the cell wall of a bacterium, or the surface of other types of cells. Antigens are extremely important in the identification of foreign microorganisms. The specific immune response depends on the ability of the immune lymphocytes to identify the invader and create immune cells that specifically mark the invader for destruction.

The non-specific defenses consist of the outer barriers, the lymphocytes, and the various responses that are designed to protect the body against invasion by any foreign microorganism.

The skin and mucous membranes act as effective barriers against harmful invaders. The surface of the skin is slightly acidic, which makes it difficult for many microorganisms to survive. In addition, the enzyme lysozyme, which is present in sweat, tears, and saliva, kills many bacteria. Mucous membranes line many of the body's entrances, such as those that open into the respiratory, digestive, and uro-genital tract. Bacteria become trapped in the thick mucus layers and are thus prevented from entering the body. In the upper respiratory tract, the hairs that line the nose also trap bacteria. Any bacteria that are inhaled deeper into the respiratory tract are swept back out again by the cilia—tiny hairs—that line the trachea and bronchi.

Nonspecific lymphocytes either engulf A foreign invader or destroy the invader with enzymes.

Macrophages are large lymphocytes that engulf foreign cells. Because macrophages ingest other cells, they are also called phagocytes. Neutrophils are cells that migrate to areas where bacteria have invaded, such as entrances created by cuts in the skin. Neutrophils phagocytize microorganisms and release microorganism-killing enzymes. Neutrophils die quickly; pus is an accumulation of dead neutrophils. Natural killer cells kill body cells infected with viruses, by punching a hole in the cell membrane, causing the cell to lyse, or break apart.

The inflammatory response is an immune response confined to a small area. When a finger is cut, the area becomes red, swollen, and warm. These signs are evidence of the inflammatory response. At the site of injury, immune cells perform different functions: some engulf bacteria, while others release bacteria-killing chemicals. Other immune cells release a substance called histamine, which causes blood vessels to become wider (dilate), thus increasing blood flow to the area. All of these activities promote healing in the injured tissue.

An inappropriate inflammatory response is the cause of allergic reactions. When a person is allergic to pollen, the body's immune system is reacting to pollen (a harmless substance) as if it was a bacterium and an immune response is prompted. When pollen is inhaled it stimulates an inflammatory response in the nasal cavity and sinuses. Histamine is released that dilates blood vessels, and also causes large amounts of mucous to be produced, leading to a runny nose. In addition, histamine stimulates the release of tears and is responsible for the watery eyes and nasal congestion typical of allergies. To combat these reactions, many people take drugs that deactivate histamine.

The complement system is a group of more than 20 proteins that complement other immune responses. When activated, the complement proteins perform a variety of functions: they coat the outside of microorganisms, making them easier for immune cells to engulf; they stimulate the release of histamine in the inflammatory response; and they destroy virus-infected cells by puncturing the plasma membrane of the infected cell, causing the cell to burst open.

The specific immune response is activated when microorganisms evade the non-specific defenses. Two types of specific defenses destroy microorganisms in the human body: the cell-mediated response and the antibody response. The cell-mediated response attacks cells that have been infected by viruses. The antibody response attacks both free viruses that have not yet penetrated cells, and bacteria, most of which do not infect cells. However, some bacteria, such as the mycobacteria that cause tuberculosis, do infect cells.

Helper T cells are a subset of T-cell lymphocytes that play a significant role in both the cell-mediated and antibody immune responses. When one of the body's macrophage cells ingests a foreign invader, it displays the antigen on its membrane surface. These antigen-displaying-macrophages, or APCs, are the immune system's distress signal. When a helper T cell encounters an APC, it immediately binds to the antigen on the macrophage. This binding unleashes several powerful chemicals called cytokines. Some cytokines, such as interleukin I, stimulate the growth and division of T cells. Other cytokines play a role in the fever response, another non-specific immune defense. Still another cytokine, called interleukin II, stimulates the division of cytotoxic T cells, key components of the cell-mediated response.

B cells and the antibody response

B-cell lymphocytes, or B cells, are the primary players in the antibody response. When an antigen-specific B cell is activated by the binding of an APC to a helper T cell, it begins to divide. These dividing B cells are called plasma cells. The plasma cells, in turn, secrete antibodies, proteins that attach to the antigen on bacteria or free viruses, marking them for destruction by macrophages or complement. After the infection has subsided, a few memory B cells persist that confer immunity.

Antibodies are made when a B cell specific for the invading antigen is stimulated to divide by the binding of an APC to a helper T cell. The dividing B cells, called plasma cells, secrete proteins called antibodies. Antibodies are composed of a special type of protein called immunoglobin (Ig). An antibody molecule is Y-shaped and consists of two light chains joined to two heavy chains. These chains vary significantly between antibodies. The variable regions make antibodies antigen-specific. Constant regions, on the other hand, are relatively the same between antibodies.

With the antibody molecule bound to its antigen, the microorganism is targeted by destructive immune cells like macrophages and NK cells. Antibody-tagged microorganisms can also be destroyed by the complement system.

T-cell lymphocytes are the primary players in the cell-mediated response. When an antigen-specific helper T cell is activated by the binding of an APC, the cell multiplies. The cells produced from this division are called cytotoxic T cells. Cytotoxic T cells target and kill cells that have been infected with a specific microorganism. After the infection has subsided, a few memory T cells persist, so conferring immunity.

Chemical signals activate the immune response and other chemical signals must turn it off. When all the invading microorganisms have been neutralized, special T cells (called suppressor T cells) release cytokines that deactivate the cytotoxic T cells and the plasma cells.