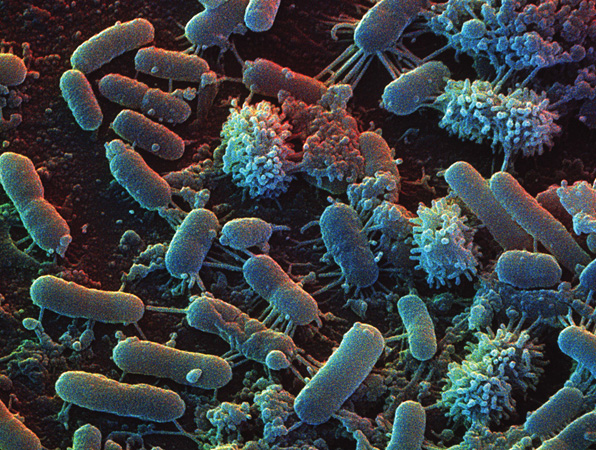 Microbes, which are also known as microorganisms include viruses, bacteria, blue-green bacteria, some algae, some fungi, yeasts, and protozoans. Microorganisms range from sub-cellular virus particles to organisms that while large and multicellular in comparison to viruses, are visible only if magnified using a powerful optical microscope or electron microscope.

Although viruses are commonly considered to be microorganisms, they are actually pseudo-organisms because they do not display all of the characteristics of life. Viruses consist only of bits of nucleic acid (either deoxyribonucleic acid (DNA), or ribonucleic acid (RNA)) surrounded by a protein capsule (called a capsid). Viruses are not capable of independent reproduction, and they cannot perform other important metabolic functions. To reproduce and grow viruses must invade and parasitize the living cells of other organisms, and appropriate the metabolic capabilities of their host.

It is probable that all living cells are infected by viruses of various sorts, and in some cases serious diseases are caused. Viral diseases of humans include colds, influenza (flu), and more deadly ailments such as smallpox, yellow fever, rabies, herpes, polio, and human immunodeficiency syndrome (HIV; which is cause of Acquried Immunodeficiency Syndrome, abbreviated as AIDS). Some viral diseases can be controlled by vaccination, a practice that involves infecting hosts with killed but intact virus bodies. These are non-virulent but nevertheless cause the host to develop resistance to pathogenic forms of the strain. Vaccination made it possible to achieve the eradication of smallpox, a disease that had long been a scourge of humans. Vaccination as a protective measure from infection is not restricted to viral diseases. Some diseases caused by bacteria can also be prevented by vaccination.

Bacteria and blue-green bacteria are in the kingdom of life known as Monera. Most species in this group are bacteria; these have rigid or semi-rigid cell walls, propagate by binary division of the cell, and do not display mitosis during cell division. Blue-green bacteria or cyanobacteria (sometimes incorrectly referred to as blue-green algae) utilize chlorophyll dispersed within their cytoplasm as a pigment for capturing light energy during photosynthesis. The genetic material of monerans is organized as a single strand of DNA, and it is not contained within a membrane-bounded organelle called a nucleus, so these microorganisms are referred to as being prokaryotic. (All of the other kingdoms have a nucleus within their cells, and are known as eukaryotic.) In addition, prokaryotes do not display meiosis or mitosis, their reproduction is by asexual cellular division, and they do not have organelles such as chloroplasts, mitochondria, or flagella. Prokaryotes were the first organisms to evolve, about 3.5 million years ago. It was not until 2 million years later that the first eukaryotes evolved.

About 4,800 species of bacteria have been named, but microbiologists believe that there are many additional species that have not yet been discovered. Bacteria are capable of exploiting an astonishing range of ecological and metabolic opportunities. Some species can only function in the presence of oxygen, and others only under anaerobic conditions, although some species are able to opportunistically switch between these metabolic types. Some bacteria can tolerate very extreme environments, surviving in hot springs at temperatures as hot as 172°Fahrenheit (78°C), while other species have been found active in the frigid conditions that occur as deep as 436 yards (400 m) in glaciers.

Most free-living bacteria are heterotrophic, and among the diversity of bacterial species are some that are capable of metabolizing virtually any organic substances as a source of nutrition. Other species of bacteria are photosynthetic (including blue-green bacteria), capable of capturing sunlight and using it to reduce carbon dioxide and water into simple sugars, which are used as a source of energy in more complex biochemical syntheses. Other bacteria are chemosynthetic, coupling their biosynthetic abilities to energy released during the oxidation of certain inorganic compounds, as when pyritic sulfur or sulfide are oxidized to sulfate.

Many species of bacteria are not free-living, and instead live in a mutualistic symbiosis with more complex organisms, such as plants or invertebrate or vertebrate animals. For example, numerous species of bacteria live as a microbial community within the rumen of cows and sheep, while others live in the gut of humans and other primates. These gut bacteria help with the digestion of complex organic foods, and they also synthesize vitamins and micronutrients that are useful to their host. Other bacteria in the genus Rhizobium live in a mutualism with the roots of peas, clovers, and other leguminous plants, fixing atmospheric dinitrogen gas (N2) into ammonia (NH3), which after conversion to ammonium (NH4), it becomes a source of nitrogen that plants can utilize as a nutrient.

Many bacteria are parasites of other organisms, and some cause important diseases. Significant diseases of humans caused by bacteria include various kinds of infections, bacterial pneumonia, cholera, diphtheria, gastric ulcers, gonorrhea, Legionnaire's disease, leprosy, scarlet fever, syphilis, tetanus, tooth decay, tuberculosis, whooping cough, most types of food poisoning, and the "flesh-eating disease," which is caused by a virulent strain of Streptococcus. Bacteria also cause diseases of other species, and this is sometimes used to the advantage of humans. For example, Bacillus thuringiensis is a pathogen of many species of moths, butterflies, and blackflies, and strains of this bacterium have been used as a biological insecticide against certain insect pests in agriculture and forestry.

The kingdom Protista consists of a wide range of simple eukaryotic organisms, including numerous unicellular and multicellular species. Microbial protists include protozoans, foraminifera, slime molds, single-celled algae, and multicellular algae. (Some other multicellular algae are not microscopic--the largest seaweeds, known as kelps, can grow fronds longer than 11 yards [10 meters]) Eukaryotic organisms have their genetic material organized within a membrane- bounded nucleus, containing paired chromosomes of DNA. Protists have flagellated spores, and mitochondria and plastids are often, but not always, present.

Several phyla of protists are photosynthetic, and these are collectively known as algae. Most species in the following groups are microscopic: diatoms (phylum Bacillariophyta), green algae (Chlorophyta), dinoflagellates (Dinoflagellata), euglenoids (Euglenophyta), and red algae (Rhodophyta). The brown algae and kelps (Phaeophyta) are macroscopic, as are some colonial species in several of the other groups. Algae are important primary producers in marine and freshwater ecosystems. Uncommon phenomena known as "red tides" are natural blooms of certain species of marine dinoflagellates that produce toxic biochemicals.

Other phyla of microbial protists have a heterotrophic nutrition. Protozoans are single-celled microorganisms, generally considered to be microscopic animals. Protozoans reproduce by binary fission, and are often motile, usually using cilia or flagella for propulsion. Some protozoans are colonial. Protozoans are abundant in most aquatic environments.

Other heterotrophic protists include the ciliates (Ciliophora), forams (Foraminifera), amoebae (Rhizopoda), and unicellular flagellates (Zoomastigina). Forams are unicellular microorganisms that form a "shell" of calcium carbonate. Chalk is a mineral that is formed from the remains of forams that have accumulated over geologically long periods of time. (The white cliffs of Dover, England, consist of the fossil remains of innumerable forams).

Some species of protists cause diseases of humans, such as Plasmodium, a unicellular blood parasite that causes malaria and is spread to people and other vertebrate animals by mosquitoes. Some species of amoebae are parasites of animals, causing amoebic dysentery in humans. Hiker's diarrhea (or beaver fever) is a water-borne disease caused by the ciliate Giardia, which is the reason why even the cleanest-looking natural waters should be boiled or otherwise disinfected before drinking.

The kingdom Fungi consists of single-celled microorganisms known as yeasts, plus the fungi, which are multi- celled, filamentous in their growth form, and reproduce by budding or by cellular fission. All yeasts and fungi are heterotrophic, excreting enzymes that digest complex organic materials, allowing simple organic compounds to be ingested.

A few species of yeasts are economically important because they have the ability to ferment sugars under anaerobic (O2-deficient) conditions, yielding gaseous CO2 and ethyl alcohol (or ethanol). The carbon dioxide produced during fermentation can be utilized to raise bread dough prior to baking, while the alcohol can be used by brewers to produce beer, wine, and other intoxicating beverages.

Microorganisms are characterized only by their microscopic size. Otherwise they comprise a wide range of diverse but not necessarily related groups of organisms. As a larger group, microorganisms are extremely important as primary producers in ecosystems, as agents of decay of dead organisms and recycling of the nutrients contained in their biomass, and as parasites and diseases of humans and other species.