The human microbiome refers to the entirety of genetic material of all the microorganisms (bacteria, bacteriophage, fungi, protozoa, and viruses) found on or inside the human body. The term was created by microbiologist Joshua Lederberg in 2001.

There are trillions of microbes (bacteria, viruses, fungi, and protozoa) living on and inside the human body. In fact, the human body has more microbes than individual cells. According to researcher Dr. Martin J. Blaser at the New York University School of Medicine, “The current estimate is that humans have ten trillion human cells and about 100 trillion bacterial cells.” These organisms conduct necessary functions such as aiding in digestion, protecting from illness, and enhancing the reproductive system. Scientists have known for many years that bacteria play an important role in health. Of the thousands of known bacteria, only approximately 100 are known to be harmful to humans. Using the microbiome, researchers are investigating the role of bacteria and other microbes in promoting and protecting health.

In 2007, researchers at the National Institutes of Health (NIH) began the Human Microbiome Project to study microbiomes within the human body and the genetics of these organisms. Their goal was to “characterize microbial communities found at multiple human body sites and to look for correlations between changes in the microbiome and human health.” This project has led to the discovery of the significance of genetic information from the 10,000-plus different species of microbes that live in and on the human body and has identified more Page 1162  |  Top of Articlethan eight million unique microbial genes associated with the human microbiome in healthy adults. These microbes contribute more genes used in human survival than the entire human genome. These microorganisms are crucial to human survival, and by studying them, scientists have recognized the fact the humans need these organisms far more than previously thought. 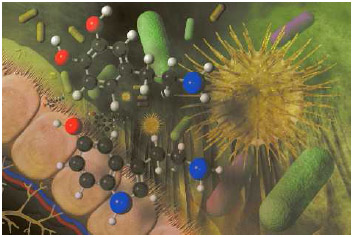 Researchers studying the human microbiome have identified several areas of clinical significance. These areas include conditions such as childhood asthma, skin allergies, hay fever, and eczema. The NIH is currently investigating these conditions and their relationship with microbiomes. Asthma and allergies are related and multifactorial conditions. The microbiome is most likely a factor in the relationship between genes, the environment, and exposure that influences susceptibility to allergies and asthma. Researchers have proposed a system of investigating these interactions that includes studying host genetics and immunology, microbiota, environmental exposures, and disease.

Another area of research involving the microbiome is antibiotic resistance. Researchers agree that antibiotic resistance is a global threat. The overuse of antibiotics has given rise to many strains of bacteria that are resistant to antibiotics currently available. The microbiome in the human digestive tract is one of the most densely populated ecosystems known to man. Through the efforts of the Human Microbiome Project, researchers have identified antimicrobial resistance (AMR) genes that thrive in that ecosystem. The human digestive tract is a reservoir of microbiomic genetic material, and through the replication of these AMR genes in the human gut, antibiotic resistance is passed from individual to individual. One mechanism of transmission is birth. Once the amniotic sac is opened and a child is born, he or she is exposed to the bacteria, or microbiome surrounding them. Depending on the method of delivery, the infant may acquire bacteria from the mother's vaginal canal. If delivered via C-section, she may be exposed via the hospital environment and healthcare workers. As the child is exposed to her surroundings, microorganisms—both beneficial and harmful—begin to grow within her body. In this manner, scientists believe the AMA genes that lead to antibiotic resistance are passed from generation to generation.

Another condition affected by the microbiome is irritable bowel syndrome (IBS). When examining the many factors involved in IBS, researchers acknowledge the fact that IBS seems to run in families and that multiple single nucleotide polymorphisms (SNP) are involved such as the -308 (G/A) SNP and mutations in the TNFSF15 gene, a known cause for Crohn's disease. Studies have also found increased markers of bacterial DNA in individuals with IBS. There is a symbiosis between the human host and the microbiota in the digestive tract that helps to keep the environment in the colon stable and protects the host from pathogens by producing antibacterial substances such as short chain fatty acids (SCFA). Scientists continue to study this symbiosis and to identify genetic factors.

Using several scientific methodologies, researchers have identified some genetic information of the microbiome and how they affect humans. One such method is utilizing the large databases of human genomic data such as the National Center for Biotechnology Information's (NCBI) non-redundant Clusters of Orthologous Groups (COG) or the Kyoto Encyclopedia of Genes and Genomes (KEGG) databases and comparing specific sections of the genetics of a microorganism isolated from the microbiome. The advantage to this method is that it may identify interactions between microorganisms or between host and microorganism; however, it is limited because of sections of missing data and gaps in the genome that are not identified.

Another method to identify genetic factors of the human microbiome is to use catalogues of known genes within the microbiome. Researchers are compiling data to create more comprehensive catalogues as genes are identified. As technology progresses, scientists expect not only to identify more of the genetics of the microbiome but also to identify more of the significance of microorganism/host interactions. One such interaction is the AMR gene and antibiotic resistance.

Every human, regardless of gender or race, has a microbiome associated with his or her body. There is far more variability within the microbiome than in the human genome, making it an even more individualized set of genetic material. According to Dusko Ehrlich, project coordinator of MetaHIT, a program created to study the genomics of the intestinal tract, “There's a 0.1% difference in our genomes, but there may be a 50% difference in our metagenome.”

When the microbiome is in balance and working in harmony with the host, there are no symptoms of illness; however, when the microbes of the body become unbalanced, symptoms occur and will be determined by the type of imbalance present and the organ system or part of the body involved. When the bacteria in the digestive tract change because of SNP mutations, Crohn's disease may be present. If the microbe imbalance is present in the respiratory tract, then asthma symptoms may occur, and if the bacteria of the gut contain mutations in the AMR gene, the host may be susceptible to drug-resistant infections. Other studies have shown a link between changes in the microbes of the gut and conditions such as obesity and anxiety.

Research into the benefits of the microbiome as a diagnostic tool is ongoing. In 2012, Swedish scientists showed that the microbial genes in the digestive tract may be a better predictor of risk for developing type 2 diabetes than measurements such as waist-to-hip ratio and body mass index. Also in 2012, researchers from the MetaHIT project presented data to suggest that digestive-tract bacteria were more accurate at predicting obesity and leanness than individual genetic variants. These results have led researchers at the University of Colorado to surmise that microbiomes may help to more accurately diagnose other digestive tract and immune system disorders such as Crohn's disease, which is often misdiagnosed.

Researchers have discovered that prebiotics and probiotics may have a beneficial effect on individuals with psychological and digestive disorders as is sometimes seen with IBS. Studies have shown that both prebiotics and probiotics affect a mechanism called the brain-gut axis communications. There is significant data about the connection between the microbiome in the gut and the functioning of the brain. This data suggests that there is a communications loop between the central nervous system (CNS) and the enteric nervous system (ENS). This communication is bidirectional, or a loop that links the emotional and cognitive centers of the brain with peripheral digestive functions. The results of this line of research suggest that prebiotics and probiotics may be effective treatment for some psychological disorders and for digestive disorders such as IBS.

Another treatment that uses information from the microbiome is fecal transplantation, a procedure generally used for individuals with drug-resistant infections, in which fecal material from a healthy person is introduced into the digestive tract of an individual with a drug-resistant infection such as Clostridium difficil (C. difficile). Antibiotic therapy can upset the balance of the microbiome and allow the C. difficile to multiply. The fecal material from a healthy individual can help to regrow the needed microorganisms and reestablish a balanced microbiome. This can lead to eradication of the sick bacteria or at least a reduction in its numbers so that symptoms subside.

Bacteriophage—
A virus that can destroy a bacteria.
Metagenome—
Genetic material taken directly from an environment.
Microbe—
A microorganism.
Microbiota—
Microscopic living organism.
Prebiotic—
Chemicals or compounds that induce growth in microorganisms.
Probiotic—
Microorganisms believed to provide health benefits to humans.
Protozoa—
One type of a class of single-celled organism.
Single nucleotide polymorphism (SNP)—
A type of single-gene mutation.

In 2014, a major pharmaceutical company announced a partnership with a biotech company Page 1164  |  Top of Articlein order to study the microbiome with the goal of developing tests for liver and digestive disease. Other research is seeking to develop small proteins to work with the microbiome to treat conditions like diabetes and autoimmune illnesses. Many researchers think the future of medical treatment may be found in the organisms and genetics of the microbiome.

QUESTIONS TO ASK YOUR DOCTOR

Frankzosa, E. A., et al. “Identifying Personal Microbiomes Using Metagenomic Codes.” Proceedings of the National Academy of Sciences of the United States of America 112, no. 22 (2015): E2930–8.

Penders, John, et al. “The Human Microbiome as a Reservoir of Antimicrobial Resistance.” Frontiers in Microbiology 4, no. 87 (2013).

MedlinePlus. “Your Microbes and You: The Good, Bad and Ugly.” U. S. National Library of Medicine. http://newsinhealth.nih.gov/issue/Nov2012/Feature1 (accessed August 12, 2015).