Sputnik (which means "traveling companion" or "satellite" in Russian) is the name given to a series of scientific research satellites launched by the Soviet Union during the period from 1957 to 1961. The satellites ranged in size and capability from the 83.6-kilogram (an equivalent weight on Earth of 184.3 pounds) Sputnik 1, which served only as a limited radio transmitter, to Sputnik 10, which had a mass of 4,695 kilograms (equivalent weight on Earth of 10,350 pounds). Together the Sputnik flights ushered in the space age and began the exploration of space by orbital satellites and humans. Sputnik 1, which launched on October 4, 1957, is the most famous in the series.

In August 1957, the Soviet Union conducted a successful test flight of a stage-and-a-half liquid-fueled intercontinental ballistic missile (ICBM) called the R-7. Shortly thereafter Soviet scientists were quoted in the news media inside the Soviet Union saying that they were planning for the launch of an Earth satellite using a newly developed missile. Western observers scoffed at the accounts. In the late summer of 1957, Soviet scientists told a planning session of the International Geophysical Year celebrations that a scientific satellite was going to be placed into orbit, and they released to the press the radio frequency that the satellite would use to transmit signals. Again, the statements were widely dismissed inside the United States as Soviet propaganda.

Late in the evening in the United States (Eastern Standard Time) on Friday, October 4, 1957, Radio Moscow announced that a small satellite designated Sputnik 1 had been launched and had successfully achieved orbital flight around Earth. The U.S. Defense Department confirmed the fact shortly after the reports reached the West.

Sputnik 1 was the first artificial satellite to reach orbit. Launched from a secret rocket base in the Ural Mountains in Soviet central Asia, it had a mass of 83.6 kilograms (an equivalent weight on Earth of 184.3 pounds), was 0.58 meter (1.9 feet) wide, and carried four whip-style radio antennas that measured 1.5 to 2.9 meters (4.9 to 9.5 feet) in length. Aboard the tiny satellite were instruments capable of 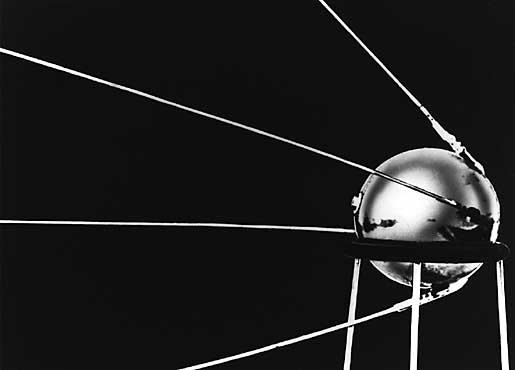 measuring the thickness and temperature of the high upper atmosphere and the composition of the ionosphere, and the satellite was also capable of transmitting radio signals. The Soviet news agency TASS (in English: Telegraph Agency of the Soviet Union) released the final radio frequency of Sputnik 1 and the timetables of its broadcasts, which were widely disseminated by news media worldwide. Sputnik 1 transmitted for twenty-one days after reaching orbit and remained in orbit for ninety-six days. It burned up in the atmosphere on its 1,400th orbit of Earth.

Sputnik 2 was launched into orbit a month later on November 3, 1957. It was a much larger satellite, with a mass of 508 kilograms (an equivalent weight on Earth of 1,120 pounds), and contained the first living creature to be orbited, a dog named Laika. The dog, its capsule, and the upper part of the rocket that launched it remained attached in space for 103 days before burning up after making 2,370 orbits. However, there was only enough oxygen, food, and water to keep Laika alive for a week. There were no provisions to either save the dog or return its capsule to Earth.

Sputnik designations, beginning with Sputnik 11, were unofficially given by the U.S. news media to a series of Soviet spacecraft but these craft were actually parts of later Soviet space programs such as Cosmos, Vostok, and Luna.

ballistic
the path of an object in unpowered flight; the path of a spacecraft after the engines have shut down

Furniss, Tim. A History of Space Exploration and Its Future. London: Mercury, 2005.