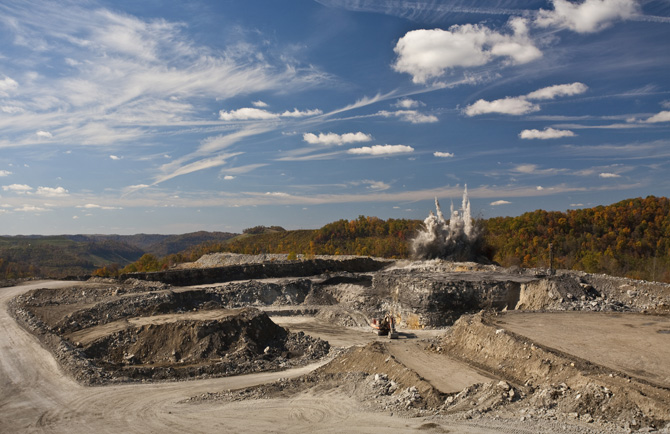 Coal is a naturally occurring combustible material consisting primarily of the element carbon, but with low percentages of solid, liquid, and gaseous hydrocarbons and other materials, such as compounds of nitrogen and sulfur. Coal is usually classified into the sub-groups known as anthracite, bituminous, lignite, and peat. The physical, chemical, and other properties of coal vary greatly from sample to sample.

Coal forms primarily from ancient plant material that accumulated in surface environments where the complete decay of organic matter was prevented. For example, a plant that died in a swampy area would quickly be covered with water, silt, sand, and other sediments. These materials prevented the plant debris from reacting with oxygen and decomposing to carbon dioxide and water, as would occur under normal circumstances. Instead, anaerobic bacteria (bacteria that do not require oxygen to live) attacked the plant debris and converted it to simpler forms. These included pure carbon and simple compounds of carbon and hydrogen (hydrocarbons). Because of the way it is formed, coal (along with oil and natural gas) is referred to as a fossil fuel.

The initial stage of the decay of a dead plant is a soft, woody material known as peat. In some parts of the world, peat is still collected from boggy areas and used as a fuel. It is not a good fuel, however. It burns poorly and with a great deal of smoke. When peat remains in the ground for long periods of time, it eventually becomes compacted as layers of sediment. These layers, known as overburden, collect above it. The added pressure and heat of the overburden gradually converts peat into another form of coal known as lignite or brown coal. Continued compaction by overburden then converts lignite into bituminous (or soft) coal and finally, anthracite (or hard) coal. Coal formed at many times in the past, but most abundantly during the Carboniferous Age (about 300 million years ago) and again during the Upper Cretaceous Age (about 100 million years ago).

Coal formed by these processes is often found in layers between layers of sedimentary rock. In some cases, the coal layers may lie at or very near the earth's surface. In other cases, they may be buried thousands of feet or meters under ground. Coal seams range from no more than 3 to 197 ft (1 to 60 m) or more in thickness. The location and configuration of a coal seam determines the method by which the coal will be mined.

Coal is classified by its heating value and its relative content of elemental carbon. For example, anthracite contains the highest proportion of pure carbon (about 86 to 98 percent) and has the highest heat value—13, 500 to 15, 600 Btu/lb (British thermal units per pound)—of all forms of coal. Bituminous coal generally has lower concentrations of pure carbon (from 46 to 86 percent) and lower heat values (8, 300 to 15, 600 Btu/lb). Bituminous coals are often sub-divided based on their heat value. They are classified as low, medium, and high volatile bituminous and sub-bituminous. Lignite, the poorest of the true coals in terms of heat value (5, 500 to 8, 300 Btu/lb), generally contains about 46 to 60 percent pure carbon. All forms of coal also contain other elements present in living organisms, such as sulfur and nitrogen, that are very low in absolute numbers. However, they have an important environmental impact when coals are used as fuels.

By far the most important property of coal is that it combusts. When the pure carbon and hydrocarbons found in coal burn completely, only two products are formed. These are carbon dioxide and water. During this chemical reaction, a relatively large amount of energy is released. The release of heat when coal is burned explains why the material has long been used by humans for energy. Uses include the heating of homes and other buildings, running ships and trains, and powering industrial processes.

The complete combustion of carbon and hydrocarbons described above rarely occurs in nature. If the temperature is not high enough or sufficient oxygen is not provided to the fuel, combustion of these materials is usually incomplete. During the incomplete combustion of carbon and hydrocarbons, other products besides carbon dioxide and water are formed. These include primarily carbon monoxide, hydrogen, and other forms of pure carbon, such as soot.

During the combustion of coal, minor constituents are also oxidized. Sulfur is converted to sulfur dioxide and sulfur trioxide, and nitrogen compounds are converted to nitrogen oxides. The incomplete combustion of coal and the combustion of these minor constituents results in environmental issues. For example, soot formed during incomplete combustion may settle out of the air and coat homes, cars, buildings, and other structures. Carbon monoxide formed during incomplete combustion is a toxic gas and may cause illness or death in humans and other animals. Oxides of sulfur and nitrogen react with water vapor in the atmosphere. Then they are precipitated out as acid rain. Acid rain is thought to be responsible for the destruction of certain forms of plant and animal (especially fish) life.

In addition to these compounds, coal often contains a few percent of mineral matter: quartz, calcite, or perhaps clay minerals. These materials do not readily combust. As such, they become part of the ash. The ash then either escapes into the atmosphere or remains in the combustion vessel and must be discarded. Sometimes coal ash also contains great amounts of lead, barium, arsenic, or other compounds. Whether air borne or in bulk, coal ash can be a serious environmental hazard.

Coal is extracted from the earth using one of two major techniques, sub-surface or surface (strip) mining. The former method is used when seams of coal are located at significant depths below the earth's surface. The first step in sub-surface mining is to dig vertical tunnels into the earth until the coal seam is reached. Horizontal tunnels are then constructed laterally off the vertical tunnel. In many cases, the preferred method of mining coal by way is called room-and-pillar mining. Here, vertical columns of coal (the pillars) are left in place as coal around them is removed. The pillars hold up the ceiling of the seam. This prevents it from collapsing on miners working around them. After the mine has been abandoned, however, those pillars may often collapse. This brings down the ceiling of the seam and causes subsidence in land above the old mine.

Surface mining can be used when a coal seam is close enough to the earth's surface to allow the overburden to be removed economically. In such a case, the first step is to strip off the overburden to reach the coal itself. The coal is then scraped out by huge power shovels. Some are capable of removing up to 130 cubic yards (100 cubic meters) at a time. Strip mining is a far safer form of coal mining. However, it presents a number of environmental problems. In most cases, an area that has been strip mined is terribly scarred. Restoring the area to its original state is a long and expensive procedure. In addition, any water that comes in contact with the exposed coal or overburden may become polluted and require treatment.

Coal is regarded as a non-renewable resource. This means that it was formed at times during the earth's history, but significant amounts are no longer forming. Therefore, the amount of coal that now exists below the earth's surface is, for all practical purposes, all the coal that humans have available to them in the foreseeable future. When this supply of coal is used up, humans will need to find a substitute to meet their energy needs.

One conversion method is known as gasification. In gasification, crushed coal is reacted with steam and either air or pure oxygen. The coal is converted into a complex mixture of gaseous hydrocarbons with heat values ranging from 100 to 1,000 Btu. One suggestion has been to construct gasification systems within a coal mine to make it much easier to remove the coal (in a gaseous form) from its original seam.

In the process of liquefaction, solid coal is converted to a petroleum-like liquid that can be used as a fuel for motor vehicles and other applications. On the one hand, both liquefaction and gasification are attractive technologies in the United States because of the country's very large coal resources. However, the wide availability of raw coal means that new technologies are unable to compete economically with the natural product.

During the twentieth century, coal oil and coal gas were important sources of fuel for heating and lighting homes. However, with the advent of natural gas, coal distillates quickly became unpopular since they are somewhat smoky and foul smelling. In the mid-2000s, petroleum continues to be used more often than coal in industries across the United States. However, coal is still important in producing electricity.

For many centuries, coal was burned in small stoves to produce heat in homes and factories. Today, coal is still used as a fuel. The largest single consumer of coal as a fuel is the electrical power industry. The combustion of coal in power generating plants is used to make steam that, in turn, operates turbines and generators. Although coal is no longer widely used to heat homes and buildings, it is used in industries such as paper production, cement and ceramic manufacture, iron and steel production, and chemical manufacture for heating and for steam generation. It is also used to manufacture coke, a nearly pure carbon produced when soft coal is heated in the absence of air. It is widely used in steel making and in certain chemical processes.