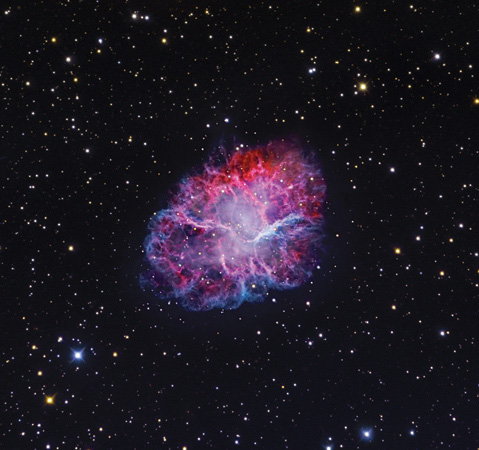 A pulsar is a celestial object that emits radiation pulses (bursts) of very short (one to a few milliseconds, or thousandths of a second) duration at very regular intervals from a fraction of a second to ten seconds.

The first pulsar was discovered in 1967 by British astrophysicist Jocelyn Bell Burnell (1943–) and British radio astronomer Antony Hewish (1924–) at Cambridge, England, with radio telescopes equipped to study the twinkling (scintillation) of radio stars. They soon discovered a radio source producing short (0.016 sec) radio pulses separated by a constant 1.3373 second interval. The pulses were so regular that an artificial terrestrial source was suspected for them, but careful, extended radio observations showed that their source rose and set about four minutes earlier each day, which demonstrated that the source was a celestial object (radio star). It received the designation CP (Cambridge Pulsar) 1919. Three more pulsars were found soon after this discovery. Their regular patterns caused some scientists to speculate that the pulsars were part of a beacon system installed by an advanced extraterrestrial civilization to aid interstellar travel.

Other scientists suggested several other more plausible hypotheses about the nature of pulsars. Among them was Austrian astrophysicist Thomas Gold's (1920–2004) hypothesis that pulsars were produced by neutron stars. Neutron stars had never been observed, but their possible existence had been suggested by American physicist J. Robert Oppenheimer (1904–1967) and George M. Volkoff in 1939 as a final remnant of a supernova explosion, where a massive star explodes and ejects most or nearly all of its mass. If the star's final remnant has a mass less than 1.4 solar masses, then a white dwarf star usually will result. However, if the remnant's mass is more than 1.4 solar masses, its gravity will cause the remnant to collapse beyond the white dwarf stage, forcing free electrons into atomic nuclei and forcing them to combine with protons to form neutrons. The collapse is finally stopped by the rigidity of nuclear matter; here about 1.5 solar masses is squeezed into a body with about a 6.2 mi (10 km) radius.

Support for Gold's neutron star model for pulsars came in 1968 when a very fast pulsar (which emits pulses every 0.33 second) was discovered in the Crab Nebula, the gaseous ejecta from a supernova observed by Chinese scientists in 1054. Subsequent observations showed that this pulsar emits pulses at wavelengths from gamma rays through visible light to radio waves. Gold's model has the neutron star rotating very fast, with its rotation period equal to the interval between pulses; only a neutron star could withstand such rapid rotation without disruption. Pulses are thought to be produced by radiation beamed towards the solar system from charged particles moving in a strongly compressed magnetic field near the pulsar.

Additional support for the neutron star model came in 1987 at the start of the observed outburst of Supernova 1987 in the Large Megellanic Cloud, when bursts of neutrinos were detected simultaneously at two widely separated underground observatories (in Japan and Ohio, United States). The theory of supernovae predicts that most of the gravitational energy released during the collapse of a supernova remnant to form a neutron star will be converted to neutrinos. The observed supernova bursts support this theory.

Extremely fast pulsars, which emit pulses at intervals from one to several milliseconds, were discovered in the 1980s. Several of them were found to be members of binary star systems with very short periods of revolution.

This has led to speculation that millisecond pulsars are formed by the merging of a neutron star and another star in a binary system, where the transfer of mass and angular momentum onto the neutron star “spins it up.” The distances to most pulsars are uncertain. The nearest estimated distance for a pulsar, is about 280 light-years. All other pulsars seem to be considerably more distant. The Crab Nebula pulsar and the 17 pulsars that have been found in 11 globular clusters have somewhat more reliable distance estimates, but there are thousands and even tens of thousands of light-years from the solar system.

Dozens of pulsars found in globular clusters have been found to be members of binary systems. Estimates of pulsar (neutron star) masses from their orbits so far indicate masses from 1.3 to 1.6 solar masses for neutron stars. Pulsars in very close binary systems are being studied in an effort to detect relativistic effects in their strong gravitational fields, which can be used to check the predictions of the general theory of relativity. Finally, the first reliably established extrasolar planets have been discovered orbiting the pulsar-neutron star PSR 1257+12. This occurred in 2002, when PSR B1257+12 was found about 980 light-years from Earth. It rotates about 161 times per second, but its pulses are not evenly spaced. Observations made with the giant Arecibo radio telescope showed that some pulses arrive slightly too soon, others just a bit too late. This means something is tugging the pulsar back and forth slightly. Careful measurements showed that the planets orbiting the pulsar are responsible for its irregular pulses.

On November 10, 2004, American astronomer Jason W.T. Hessels discovered pulsar PSR J1748-2446ad. Its discovery was confirmed on January 8, 2005. It is the fastest known spinning pulsar—at 716 Hz, with a period of 0.013959482 seconds. In 2003, PSR J0737-3039 was discovered as a binary pulsar system. It became the first known double pulsar. The largest burst of energy in the galaxy every recorded was done on December 27, 2004 when magnetar SGR 1806-20 was observed about 14.5 kiloparsecs (50,000 light-years) from Earth in the constellation Sagittarius. (A magnetar is a new type of neutron star that has a magnetic field, which is about one hundred times greater than a typical neutron star. They were first discovered in the late 1990s. Magnetars have magnetic fields that are trillions of times larger than the magnetic field surrounding Earth.)

Since their discovery in 1967, pulsars have contributed greatly to fields of astronomy, cosmology, and astrophysics as diverse as stellar structure and evolution, the theory of relativity, and extrasolar planets. Pulsar research continues.