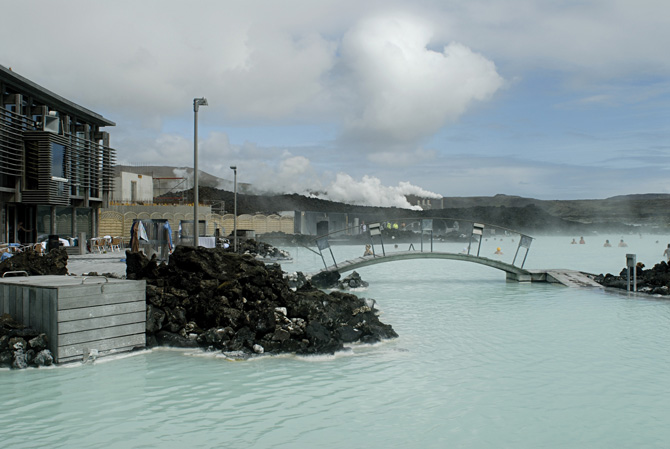 Geothermal energy is obtained from hot rocks beneath Earth's surface. The planet's core, which may generate temperatures as high as 8,000°Fahrenheit (4,5007°C), heats its interior, the temperature of which increases, on an average, by about 2°Fahrenheit (1°C) for every 60 feet (18 m) nearer the core. Some heat is also generated in the mantle and crust as a result of the radioactive decay of uranium and other elements.

In some parts of Earth, rocks in excess of 212°Fahrenheit (100°C) are found only a few miles beneath the surface. Water that encounters the rock will be heated above its boiling point. Under some conditions, the water becomes super-heated, that is, is prevented from boiling even though its temperature is greater than 212°Fahrenheit (100°C). Regions of this kind are known as wet steam fields. In other situations, the water is able to boil normally, producing steam. These regions are known as dry steam fields.

Humans have long been aware of geothermal energy. Geysers and fumaroles are obvious indications of water heated by underground rock. The Maoris of New Zealand, for example, have traditionally used hot water from geysers to cook their food. Natural hot spring baths and spas are a common feature of many cultures where geothermal energy is readily available.

The first geothermal well was apparently opened accidentally by a drilling crew in Hungary in 1867. Eventually, hot water from such wells was used to heat homes in some parts of Budapest. Geothermal heat is still an important energy source in some parts of the world. More than 99 percent of the buildings in Reykjavik, the capital of Iceland, are heated with geothermal energy.

The most important application of geothermal energy today is in the generation of electricity. In general, hot steam or super-heated water is pumped to the planet surface, where it is used to drive a turbine. Cool water leaving the generator is then pumped back underground. Some water is lost by evaporation during this process, so the energy that comes from geothermal wells is actually non-renewable. However, most zones of heated water and steam are large enough to allow a geothermal mine to operate for a few hundred years.

A dry steam well is the easiest and least expensive geothermal well to drill. A pipe carries steam directly from the heated underground rock to a turbine. As steam drives the turbine, the turbine drives an electrical generator. The spent steam is then passed through a condenser where much of it is converted to water and returned to the Earth.

Dry steam fields are relatively uncommon. One, near Larderello, Italy, has been used to produce electricity since 1904. The geysers and fumaroles in the region are said to have inspired Dante's Inferno. The Larderello plant is a major source of electricity for Italy's electric railway system, and its capacity has made Italy the sixth-largest geothermal energy producer in the world. Other major dry steam fields are located near Matsukawa, Japan, and at Geysers, California. The first electrical generating plant at The Geysers was installed in 1960. It and companion plants now provide about 20 percent of all the green power produced in California, powering 725,000 homes. In 2020, the Geysers is the largest steam electrical plant in the world.

Wet steam fields are more common, but the cost of using them as sources of geothermal energy is greater. The temperature of the water in a wet steam field may be anywhere from 360 to 660°Fahrenheit (from 180 to 250°C). When a pipe is sunk into such a reserve, some water immediately begins to boil, changing into very hot steam. The remaining water is carried out of the reserve with the steam.

At the surface, a separator is used to remove the steam from the hot water. The steam is used to drive a turbine and a generator, as in a dry steam well, before being condensed to a liquid. The water is then mixed with the hot water (now also cooled) before being returned to the earth.

Hot water (in contrast to steam) from underground reserves can also be used to generate electricity. Plants of this type make use of a binary (two-step) process. Hot water is piped from underground into a heat exchanger at the surface. The heat exchanger contains some low-boiling point liquid (the "working fluid"), such as a freon or isobutane. Heat from the hot water causes the working fluid to evaporate. The vapor then produced is used to drive the turbine and generator. The hot water is further cooled and then returned to the rock reservoir from which it came.

In addition to dry and wet steam fields, a third kind of geothermal reserve exists: pressurized hot water fields located deep under the ocean floors. These reserves contain natural gas mixed with very hot water. Some experts believed that these geopressurized zones are potentially rich energy sources although technology does not currently exists for tapping them.

Another technique for the capture of geothermal energy makes use of a process known as hydrofracturing. In hydrofracturing, water is pumped from the surface into a layer of heated dry rock at pressures of about 7,000 pounds per square inch (500 kg/cm2). The pressurized water creates cracks over a large area in the rock layer. Then, some material such as sand or plastic beads is also injected into the cracked rock. This material is used to help keep the cracks open.

Subsequently, additional cold water can be pumped into the layer of hot rock, where it is heated just as natural groundwater is heated in a wet or dry steam field. The heated water is then pumped back out of Earth and into a turbine-generator system. After cooling, the water can be re-injected into the ground for another cycle. Since water is continually re-used in this process and Earth's heat is essentially infinite, the hydrofracturing system can be regarded as a renewable source of energy.

Considerable enthusiasm was expressed for the hydrofracturing approach during the 1970s and a few experimental plants were constructed. But, as oil prices dropped and interest in alternative energy sources decreased in the 1980s, these experiments were terminated.

Geothermal energy clearly has some important advantages as a power source. The raw material--heated water and steam--is free and readily available, albeit in only certain limited areas. The technology for extracting hot water and steam is well developed from petroleum-drilling experiences, and its cost is relatively modest. Geothermal mining, in addition, produces almost no air pollution and seems to have little effect on the land where it occurs.

On the other hand, geothermal mining does have its disadvantages. One is that it can be achieved in only limited parts of the world. Another is that it results in the release of gases, such as hydrogen sulfide, sulfur dioxide, and ammonia, that have offensive odors and are mildly irritating. Some environmentalists also object that geothermal mining is visually offensive, especially in some areas that are otherwise aesthetically attractive. Pollution of water by runoff from a geothermal well and the large volume of cooling water needed in such plant are also cited as disadvantages.

In 2020, the United States leads the world in overall geothermal electrical production with about 3,567 megawatts (MW) of installed capacity from 64 power plants. Most of those plants are located in four states: California, Hawaii, Nevada, and Utah. Indonesia ranks second in the world in overall production, followed by the Philippines, Turkey, New Zealand, and Mexico. The International Energy Agency predicts 5 percent annual growth in power generation capacity up to 2023. Six countries are presently producing over 15 percent of their power from geothermal plants, including Iceland, El Salvador, Kenya, the Philippines, New Zealand, and Costa Rica. Proponents of geothermal energy believe that up to 15 percent of U.S. power needs can be met from this source as well. According to the U.S. Department of Energy, the United States has the potential for 100,000 megawatts of production, approaching nuclear power's capacity. The agency's goal is to develop the technology by 2030, making geothermal power available nationwide.