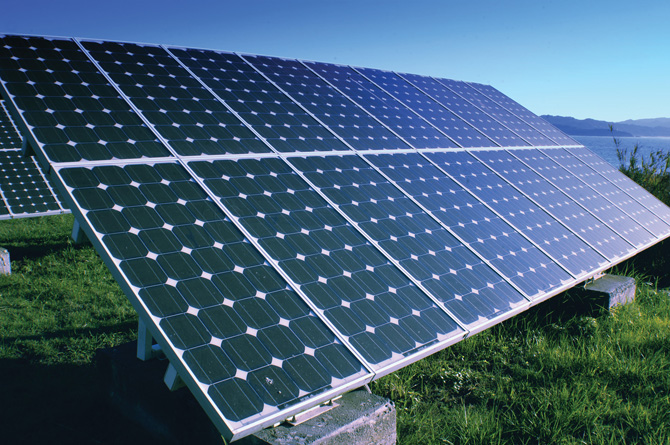 The sun is a powerful fusion reactor, where hydrogen atoms fuse to form helium and give off a tremendous amount of energy. The surface of the sun, also known as the photosphere, has a temperature of 6,000 K (10,000°Fahrenheit [5,538°C]). The temperature at the core, the region of nuclear fusion, is 36,000,000°Fahrenheit (20,000,000°C). A ball of coal the size of the sun would burn up completely in 3,000 years, yet the sun has already been burning for three billion years and is expected to burn for another four billion. The power emitted by the sun is 3.9 x 1026 watts.

Only a very small fraction of the sun's radiant energy, or insolation, reaches the Earth's atmosphere, and only about half of that reaches the surface of the Earth. The other half is either reflected back into space by clouds and ice or is absorbed or scattered by molecules within the atmosphere. The sun's energy travels 93,000,000 miles (149,667,000 km) to reach the Earth's surface. It arrives about 8.5 minutes after leaving the photosphere in various forms of radiant energy with different wave lengths, known as the electromagnetic spectrum.

Solar radiation, also known as solar flux, is measured in Langleys per minute. One Langley equals one calorie of radiant energy per square centimeter. It is possible to appreciate the magnitude of the energy produced by the sun by comparing it to the total energy produced on earth each year by all sources. The annual energy output of the entire world is equivalent to the amount the sun produces in about five billionths of a second. Solar radiation over the United States each year is equal to 500 times its energy consumption.

The solar energy that reaches the surface of the Earth and enters the biological cycle through photosynthesis is responsible for all forms of life, as well as all deposits of fossil fuel. All energy on Earth comes from the sun, and it can be utilized directly or indirectly. Direct uses include passive solar systems such as greenhouses and atriums, as well as windmills, hydropower, and the burning of biomass. Indirect uses of solar energy include photovoltaic cells, in which semiconductor crystals convert sunlight into electrical power, and a process that produces methyl alcohol from plants.

Wind results from the uneven heating of the Earth's atmosphere. About 2 percent of the solar energy that reaches the Earth is used to move air masses, and at any one time the kinetic energy in the wind is equivalent to twenty times the current electricity use. Due to mechanical losses and other factors, windmills cannot extract all this power. The power produced by a windmill depends on the speed of the wind and the effective surface areas of the blades, and the maximum extractable power is about 60 percent.

The use of the water wheel preceded windmills, and it may be the most ancient technology for utilizing solar energy. The sun causes water to evaporate, clouds form upon cooling, and the subsequent precipitation can be stored behind dams. This water is of high potential energy, and it is used to run water wheels or turbines. Modern turbines that run electric generators are approximately 90 percent efficient.

A passive solar heating system absorbs the radiation of the sun directly, without moving parts such as pumps. This kind of low-temperature heat is used for space heating. Solar radiation may be collected by the use of south-facing windows in the Northern Hemisphere. Glass is transparent to visible light, allowing long-wave visible rays to enter, and it hinders the escape of long-wave heat, therefore raising the temperature of a building or a greenhouse.

A thermal mass, such as rocks, brine, or a concrete floor, stores the collected solar energy as heat and then releases it slowly when the surrounding temperature drops. In addition to collecting and storing solar energy as heat, passive systems must be designed to reduce both heat loss in cold weather and heat gain in hot weather. Reductions in heat transfer can be accomplished by heavy insulation, by the use of double glazed windows, and by the construction of an earth brim around the building. In hot summer weather, passive cooling can be provided by building extended overhangs or by planting deciduous trees. In dry areas, such as in the southwestern United States or the Mediterranean, solar-driven fans or evaporative coolers can remove a great deal of interior heat. Examples of passive solar heating include roof-mounted hot-water heaters, solarian glass-walled rooms or patios, and earth-sheltered houses with windows facing south.

A simple and innovative technology in passive systems is a design based on the fact that at depth of 15 feet (4.6 m) the temperature of the earth remains at about 55°Fahrenheit (13°C) all year in a cold northern climate and about 67°Fahrenheit (19°C) in warm a southern climate. By constructing air intake tubes at depths of 15 feet (4.6 cm), the air can be either cooled or heated to reach the earth's temperature, proving an efficient air conditioning system.

Active solar systems differ from passive systems in that they include machinery, such as pumps or electric fans, which lowers the net energy yield. The most common type of active systems is photovoltaic cells, which convert sunlight into direct current electricity. The thin cells are made from semiconductor material, mainly silicon, with small amounts of gallium arsenide or cadmium sulfide added so that the cell emits electrons when exposed to sunlight. Solar cells are connected in a series and framed on a rigid background. These modules are used to charge storage batteries aboard boats, operate lighthouses, and supply power for emergency telephones on highways. They are also used in remote areas not connected to a power supply grid for pumping water either for cattle or irrigation.

The increased trapping of solar radiation by the atmosphere, due to the accumulation of chemicals that are collectively known as greenhouse gases, has been warming the atmosphere since the mid-eighteenth century. Particularly in the 1990s and beyond, the climatic effects of atmospheric warming have become more pronounced.

As of 2020, the U.S. Energy Information Administration claims solar energy sources account for about 30 percent of new U.S. electricity capacity (not actual electricity generated) anticipated to come online over the next two years. It is estimated that one trillion watts of solar photovoltaic capacity will be installed worldwide by 2023.