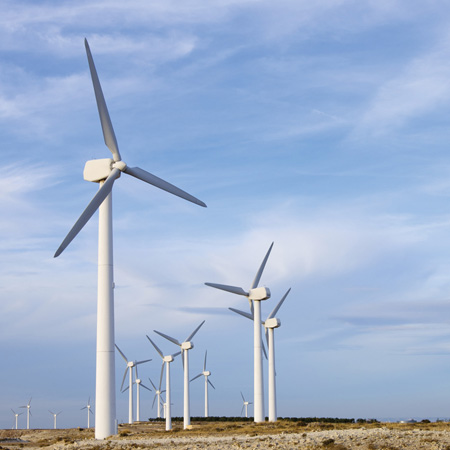 The ultimate source of most energy used by humans is the sun. Fossil fuels, for example, are substances in which solar energy has been converted and stored as plants or animals that have died and decayed. When energy experts look for alternative energy sources, they often search for new ways to use solar energy. Wind energy, although not technically classified as solar energy, is produced by the uneven heating of the Earth by the sun.

When sunlight strikes the Earth, it heats objects such as land, water, and plants, but it heats them differentially. Dark-colored objects absorb more heat than light-colored ones and rough surfaces absorb more heat than smooth ones. As these materials absorb varying amounts of heat, they also transmit that heat to the air above them. When air is warmed, it rises and is replaced by cooler air, leaving a low-pressure area that causes the movement of air known as wind. Some types of topography and some geographic regions are more likely to experience windy conditions than others, and from the standpoint of energy production, these areas are reserves from which energy can be extracted.

One kind of device used for capturing the energy of winds is known as a windmill. The wind strikes the blades of a windmill, causing them to turn, and the solar energy stored in wind is converted to the kinetic energy of moving blades. That energy, in turn, is used to turn an axle, to power a pump, to run a mill, or to perform some other function. The amount of power that can be converted by a windmill depends primarily on two factors: the area swept out by the windmill blade and the wind speed. One goal in windmill design, therefore, is to produce a machine with very large blades. But the power generated by a windmill depends on the cube of the wind speed, and so in any operating windmill, natural wind patterns are by far the most important consideration.

Farmers have been using windmills to draw water from wells and to operate machinery for centuries, and the technology has been traced back to the seventh century AD. In the early twentieth century, windmills were a familiar sight on U.S. farms. More than six million of them existed, and some were used to generate electricity on a small scale. As other sources of power became available, however, that number declined until the late 1970s, when no more than 150,000 were still in use. In 2020, the number of traditional windmills used as a source of energy on American farms is greatly reduced, although they can still be seen in some parts of the country.

In the 1970s, windmills were not considered part of the nation's energy equation. Fossil fuels had long been cheap and readily available, and nuclear power was widely regarded as the next best alternative. The 1973 oil embargo by the Organization of Petroleum Exporting Countries (OPEC) and the Three Mile Island nuclear disaster in 1979 changed these perceptions and caused experts to begin thinking once more about wind power as an alternative energy source.

During the 1970s, both governmental agencies and private organizations stepped up their research on wind power. The National Aeronautics and Space Administration (NASA), for example, designed a number of windmills, ranging from designs with huge, broad-blade fans, to ones with thin, airplane-like propellers. The largest of these machines, weighing one hundred tons, consisted of blades three hundred feet (one hundred meters) long, which rotate on top of towers two hundred feet (sixty meters) tall. At winds of 15-45 miles per hour (25-70 km per hour), these windmills can generate 2.5 megawatts (MW) of electricity. Under the best circumstances, modern windmills achieve an energy-conversion efficiency of 30 percent, comparable or superior to any other form of energy conversion.

As a result of changing economic conditions and technological advances, windmills became an increasingly popular energy source for both individual homes and large energy-producing corporations. With dependable winds of 10-12 miles per hour (16-20 km per hour), a private home equipped with a windmill can generate enough electricity to meet its own needs. The 1978 Public Utilities Regulatory Policies Act requires electric utilities to purchase excess electricity from private citizens who produce more than they can use by alternative means, such as wind power. Wind farms, consisting of hundreds of individual windmills, are able to generate enough electricity to meet the needs of small communities.

North America has large wind reserves. Twelve states--North Dakota, South Dakota, Texas, Kansas, Montana, Nebraska, Wyoming, Oklahoma, Minnesota, Iowa, Colorado, and New Mexico--contain as much as 90 percent of the U.S. wind potential. Experts say that North Dakota is the windiest state in the United States, with enough wind to supply 37 percent of the electricity used in the entire nation. The largest number of wind farms in the United States is found in Texas; Iowa produces the highest percentage of its power from wind.

By the mid-1990s, wind energy had become the fastest growing source of energy in the world. Global wind electric capacity doubled between 1995 and 1998, and doubled again by 2001. According to the World Wind Energy Association (WWEA), as of 2020 there is a worldwide installed capacity of 435 GW. The United States ranks second in the world in terms of wind turbine capacity, accounting for 100.1 GW. China currently boasts over 145 GW of installed capacity, generating 33.6 percent of the world's wind power. Germany has the third-most wind turbine capacity at approximately 45 GW.

A trend in wind power is offshore production, particularly in Europe. Offshore wind farms are being explored due to fewer available land sites, as well as higher and more consistent winds offshore. Engineers are studying means of capturing offshore wind power. In coastal urban areas, wind farms can be built offshore on floating platforms. The electricity generated can be sent back to land on large cables or used on the platforms to generate hydrogen from seawater, which can then be shipped to land and used as a fuel.

Like any energy source, wind power has some disadvantages, and these are some of the reasons why wind power has not already become more popular. The most obvious disadvantage is that it can be used only in locations that have enough wind over an extended part of the day. Storage of energy is also a problem. Wind is strongest in spring and autumn when power is least needed and weakest in summer and winter when demand is greatest. Other drawbacks include controversies over the appearance of wind farms and the claim that they spoil the natural beauty of an area. Concerns have also been raised about the noise they produce and the electromagnetic fields they create. Finally, wind farms cause the death of untold thousands of birds each year, because birds use the same windy passages in their flight patterns that are good for energy production.

Around the world, wind power will become increasingly important as concerns increase over climate change and the pollution caused by the burning of fossil fuels, and as technology makes it cheaper and more available. Alternative sources of fuel and energy have become more important considering the issue of climate change and the state of the environment. In 2020, wind will supply about 5 percent of the global electricity demand.

As of 2020, the U.S. Energy Information Administration claims that wind and solar energy sources account for about 75 percent of new U.S. electricity capacity (not actual electricity generated) anticipated to come online over the next two years.