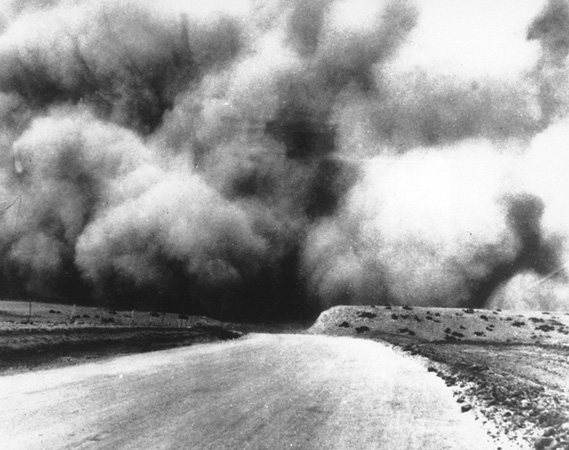 Dust Bowl is a term coined by a reporter for the Washington (DC) Evening Star to describe the effects of severe wind erosion in the Great Plains during the 1930s, caused by severe drought and lack of conservation practices.

For a time after World War I, agriculture prospered in the Great Plains. Land was rather indiscriminantly plowed and planted with cereals and row crops. In the 1930s, the total cultivated land in the United States increased, reaching 530 million acres (215 million ha), its highest level ever. Cereal crops, especially wheat, were most prevalent in the Great Plains. Summer fallow (cultivating the land, but only planting every other season) was practiced on much of the land. Moisture, stored in the soil during the fallow (uncropped) period, was used by the crop the following year. In a process called dust mulch, the soil was frequently clean tilled to leave no crop residues on the surface, control weeds, and, it was thought at the time, preserve moisture from evaporation. Frequent cultivation and lack of crop canopy and residues optimized conditions for wind erosion during the droughts and high winds of the 1930s.

During the process of wind erosion, the finer particles (silt and clay) are removed from the topsoil, leaving coarser-textured sandy soil. The fine particles carry with them higher concentrations of organic matter and plant nutrients, leaving the remaining soil impoverished and with a lower water storage capacity. Wind erosion of the Dust Bowl reduced the productivity of affected lands, often to the point that they could not be farmed profitably.

While damage was particularly severe in Texas, Oklahoma, Colorado, and Kansas, erosion occurred in all of the Great Plains states, from Texas to North Dakota and Montana, even into the Canadian Prairie Provinces. The eroding soil not only prevented the growth of plants, it uprooted established ones. Sediment filled fence rows, stream channels, road ditches, and farmsteads. Dirt coated the insides of buildings. Airborne dust made travel difficult because of decreased visibility; it also impaired breathing and caused respiratory diseases.

Dust from the Great Plains was carried high in the air and transported as far east as the Atlantic seaboard. In places, 3 to 4 inches (7-10 cm) of topsoil was blown away, forming dunes 15 to 20 feet (4.6-6.1 m) high where the dust finally came to rest. In a twenty-county area covering parts of southwestern Kansas, the Oklahoma strip, the Texas Panhandle, and southeastern Colorado, a soil-erosion survey by the Soil Conservation Service showed that 80 percent of the land was affected by wind erosion, 40 percent of it to a serious degree.

The droughts and resultant wind erosion of the 1930s created widespread economic and social problems. Large numbers of people migrated out of the Dust Bowl area during the 1930s. The migration resulted in the disappearance of many small towns and community services such as churches, schools, and local units of government.

Following the disaster of the Dust Bowl, the 1940s saw dramatically improved economic and social conditions with increased precipitation and improved crop prices. Gradually, changes in farming practices have also taken place. Much of the severely damaged and marginal land has been returned to grass for livestock grazing. Nondetrimental tillage and management practices, such as conservation tillage (stubble mulch, mulch, and residue tillage); use of tree, shrub, and grass windbreaks; maintenance of crop residues on the soil surface; and better machinery have all contributed to improved soil conditions. Annual cropping or a three-year rotation of wheat-sorghum-fallow has replaced the alternate crop-fallow practice in many areas, particularly in the more humid areas of the West.

While the extreme conditions of drought and land mismanagement of the Dust Bowl years have not been repeated since the 1930s, wind erosion is still a serious problem in much of the Great Plains.