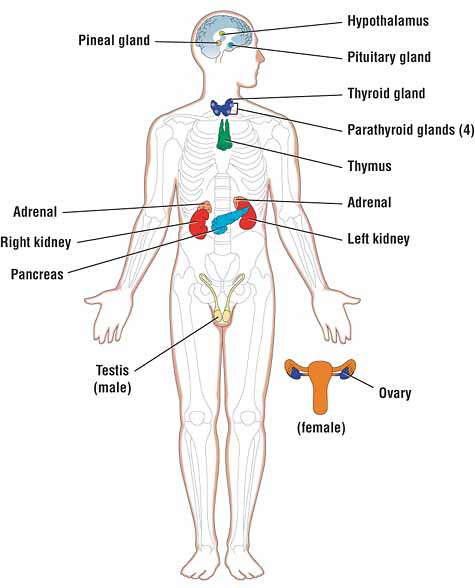 The endocrine system is a network of nine glands and over 100 hormones. It is the human body's group of specialized organs and tissues that produce, store, and secrete chemical hormones. It maintains and regulates numerous events throughout the body. Endocrine system glands include the pituitary, pineal, thyroid, parathyroids, thymus, pancreas, adrenals, and ovaries or testes. In addition, the hypothalamus, in the brain, regulates the release of pituitary hormones. Each of these glands secretes hormones (chemical messengers) into the bloodstream. Once hormones enter the blood, they travel throughout the body and are detected by receptors that recognize specific hormones. These receptors exist on target cells and organs. Once a target site is bound by a particular hormone, a cascade of cellular events follows. It culminates in the physiological response to a particular hormone.

The endocrine system differs from the exocrine system. Exocrine glands contain ducts that direct their hormones to specific sites, whereas endocrine hormones travel through blood until they reach their destination. The endocrine is like the nervous system because both systems regulate body events and communicate through chemical messengers with target cells. The nervous system, however, transmits neurotransmitters (also chemical messengers) between neighboring neurons via nerve extension. Neurotransmitters do not generally enter the circulation. Yet, some overlap between hormones and neurotransmitters exists, giving rise to chemical signals called neurohormones that function as part of the neuroendocrine system. The endocrine system oversees many critical life processes involving metabolism, growth, reproduction, immunity, and homeostasis.

Exocrine
Glands with ducts that direct hormones to a specific target.
Homeostasis
The tendency of an organism to maintain constant internal conditions despite large changes in the external environment.
Hormones
Chemical signals secreted by glands that travel through the bloodstream to regulate the body's activities.

Most endocrine hormones are maintained at specific concentrations in the plasma, the noncellular liquid portion of the blood. Receptors at set locations monitor plasma hormonal levels and inform the gland responsible for producing that hormone if levels are too high or too low for a particular time of day, month, or other life period. When excess hormone is present, a negative feedback loop is initiated, inhibiting further hormone production. Most hormones have this type of regulatory control. A few operate on a positive feedback cycle such that high levels of the particular hormone will activate release of another hormone. With this type of feedback loop, the end result is usually that the second hormone released will eventually decrease the initial hormone's secretion. An example of positive feedback regulation occurs in the female menstrual cycle. There, high levels of estrogen stimulate release of the pituitary hormone, luteinizing hormone (LH).

All hormones are influenced by numerous factors. Every physiological component that enters the circulation can affect some endocrine function. Overall, this system uses multiple bits of chemical information to hormonally maintain a biochemically balanced organism. Endocrine hormones do not fall into any one chemical class. Most are either a protein (polypeptides, peptides, and glycoproteins) or a steroid. Protein hormones bind cell-surface receptors and activate intracellular events that carry out the hormone's response. Steroid hormones usually travel directly into the cell and bind a receptor in the cell's cytoplasm or nucleus. From there, steroid hormones (bound to their receptors) interact directly with genes in the DNA (deoxyribonucleic acid) to elicit a hormonal response.

The pituitary gland is called the master gland. It secretes multiple hormones that, in turn, trigger the release of other hormones from other endocrine sites. It is roughly situated behind the nose and is anatomically separated into two distinct lobes. These are the anterior pituitary (AP) and the posterior pituitary (PP). The PP secretes two hormones, oxytocin and antidiuretic hormone (ADH), under direction from the hypothalamus in the brain. Direct innervation of the PP occurs from regions of the hypothalamus. The PP secretes its hormones into the bloodstream through blood vessels that supply it. PP is regulated in a neuroendocrine fashion. The AP, conversely, receives hormonal signals from the blood supply within the pituitary stalk.

The pineal gland, or pineal body, is a small cone-shaped gland believed to function as a body clock. It is located deep in the brain. The pineal secretes the hormone melatonin, which fluctuates daily with levels highest at night. Some scientists believe that melatonin helps regulate other diurnal events because melatonin fluctuates in a 24-hour period. Exactly what controls melatonin levels is not well understood. visual registration of light may regulate the cycle.

The thyroid is a butterfly-shaped gland that wraps around the back of the esophagus. It has two lobes connected by a band of tissue called the isthmus. An external covering of connective tissue separates each lobe into another 20 to 40 follicles. Between the follicles are numerous blood and lymph vessels in another connective tissue called stroma. The epithelial cells around the edge of the follicles produce the major thyroid hormones. These are triiodothyronine (T3), thyroxine (T4), and calcitonin. T3 and T4 are iodine-rich molecules that fuel metabolism.

The thyroid hormones play several important roles in growth, metabolism, and development. For example, the thyroid of pregnant women often becomes enlarged in late pregnancy. This occurs to accommodate metabolic requirements of both the woman and the fetus. Thyroid hormones accelerate metabolism, promoting normal growth of bones, increasing growth hormone output and the rate of lipid synthesis and mobilization. They increase cardiac output, respiration, the number of red blood cells in the circulation, and the amount of oxygen carried in the blood.

Most people have four small oval parathyroid glands poised around the thyroid gland, although some have one or two more. The sole function of these glands is to regulate calcium levels in the body, where maintenance of specific calcium levels is critical. Calcium has important bodily functions. It makes up 2 to 3 percent of adult weight with roughly 99 percent of the calcium in bones. It also provides muscle contraction and neurotransmitter secretion.

The thymus secretes several hormones that promote the maturation of different cells of the immune system in young children. The thymus oversees the development and learning of a type of immune system cell called a T lymphocyte, or T cell. Although many details of thymal hormonal activity are unclear, at least four thymal products have been identified that control T cell and B cell (antibody-producing immune cells) maturation. These are thymosin, thymic humoral factor (THF), thymic factor (TF), and thymopoietin. The viral disease AIDS (acquired immunodeficiency syndrome) is characterized by T cell depletion. Thus, some AIDS treatment approaches have tried administering thymosin to boost T cell production.

Insulin is secreted in response to high plasma glucose levels. It facilitates glucose uptake into blood cells, thus reducing plasma glucose levels. However, glucagon has the opposite effect as low plasma glucose triggers the breakdown of stored glucogen in the liver and glucose release into the blood. By balancing these two hormones, the islets continually regulate circulating glucose levels. In addition, the monitoring of blood glucose concentrations is evaluated directly at the pancreas, as opposed to being mediated by another gland such as the pituitary. Moreover, nerve endings at the islets contribute in regulating insulin and glucagon secretion. The hormone somatostatin is also released under conditions of increased blood glucose, glucagon, and amino acids. Somatostatin inhibits additional insulin release. Diabetes mellitus is a serious endocrine disorder caused by insulin dysfunctions.

One of the two adrenals sits atop each kidney. They are divided into two distinct regions, the cortex and the medulla. The adrenals provide the body with important buffers against stress while helping it adapt to stressful situations. The cells of the cortex form three distinct layers, which secrete steroid hormones. They are the zona glomerulosa (ZG), which secretes mineralocorticoids; the zona fasciculata (ZF), which secretes glucocorticoids; and the zona reticularis (ZR), which secretes primary androgens. The major glucocorticoid in humans is cortisol, which fluctuates in concentration throughout the day. The highest levels exist around 8 a.m. with the lowest levels around midnight. Both physical and emotional stress can affect cortisol secretion. The major human mineralocorticoid is aldosterone. It acts on the kidneys and is important in regulating fluid balance. It triggers increased extracellular fluid that leads to increased blood pressure.

The ovaries are located at the end of each fallopian tube in the female reproductive tract. They produce the female reproductive hormones: estrogen, progesterone, and relaxin. The fluctuation of these hormones is critical to the female menstrual cycle. A hormone from the hypothalamus, called a releasing factor, initially triggers them. They enable gonadotrophs in the pituitary to release LH and FSH that, in turn, regulate part of the menstrual cycle. All of these hormones work together as part of the endocrine system to ensure fertility. They are also important for the development of sexual characteristics during puberty.

Each month after puberty, females release a single egg (ovulation) when the pituitary releases LH. Prior to ovulation, the maturing egg releases increasing levels of estrogen. This informs the pituitary to secrete LH. During pregnancy, high levels of circulating estrogen and progesterone prevent another egg from maturing. Endocrine regulation of the female reproductive tract does not stop during pregnancy. For example, cells of the developing embryo begin to release some hormones that keep the uterine lining intact for the first couple of months of pregnancy. High progesterone levels prevent the uterus from contracting so that the embryo is not disturbed. Progesterone also helps to prepare breasts for lactation. Estrogen levels fall dramatically at menopause, signifying the end of menstrual cycling and fertility. Menopause usually occurs between the ages of 40 and 50.

The two testes are located in the scrotum, which hangs between the legs behind the penis. They are devoted primarily to sperm production. The remaining cells, called Leydig cells, produce testosterone. It carries out two important endocrine tasks in males. It facilitates sexual maturation and enables sperm to mature to a reproductively competent form. Healthy men remain capable of fertilizing an egg throughout their post-pubertal life. However, testosterone levels show a gradual decline after the age of 40, with a drop of around 20 percent by age 80. Testosterone also provides sexual desire in both men and women but reproduction can occur without maximal desire. Human sexual behavior is also influenced by several other factors, including thoughts and beliefs.

Issues and other developments

About 10 percent of the population will experience some endocrine disorder in their lifetime. Most endocrine disorders are caused by a heightened or diminished level of certain hormones. For example, excess growth hormone can cause giantism (unusually large stature). Tumors in endocrine glands are one of the major causes of hormone overproduction. Insufficient dietary iodine (required for T3 and T4 synthesis) can cause goiters. Enlarged thyroid glands, goiters occur when the thyroid attempts to compensate for low iodine with increased size.