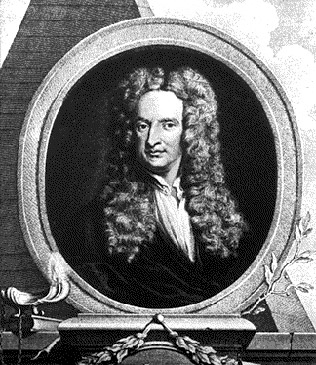 Experiments with a shutter

Isaac Newton (1642-1727), a brilliant English mathematician, had just received his bachelor's degree at the University of Cambridge when the bubonic plague hit Great Britain. Because the plague spread faster in cities, Newton continued his graduate studies for two years at his countryside home. During this time, he conducted many experiments. Early in 1666, Newton darkened his room and made a small hole in his shutters. After positioning a triangular glass prism in front of this small beam of sunlight, he noticed a band of colors called a spectrum. He concluded that when the light hit the prism, it was bent, or refracted, to form many colors. He demonstrated how the colors in sunlight could be separated, then joined again to form white light.

In his work, Newton proved three of the most important characteristics of light: that it travels in straight lines, that it can be reflected, and that it can be refracted, or bent. Newton also did an experiment showing sunlight's reflection and refraction inside raindrops. He discovered that raindrops formed tiny transparent prisms that reflected and refracted the Sun to produce colorful rainbows. 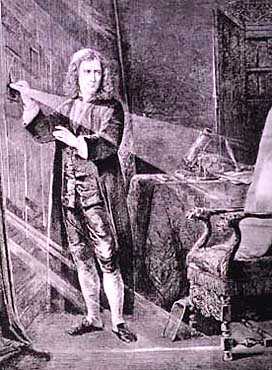 In 1801, Thomas Young, a London doctor, developed a theory that light traveled in waves and presented it to the Royal Society, a prestigious group of scientists. Christian Huygens of Holland had suggested the presence of light waves in his book published in 1690, but Young would go on to prove it with his experiments in 1803.

Young used a screen with one slit. In front of that, he placed another screen with two side-by-side slits, and watched how sunlight passed through. What he saw was bands of color fanning out and meeting each other on the other side. Young realized these bands of color called interference fringes could be made only by waves of light. Up to that time it was thought that there was no form to light and that it existed everywhere. Young's experiment also showed diffraction. Diffraction occurs when an uninterruped wave of light hits an obstacle. The obstacle bends the wave into a shadow zone. This results in light and dark fringes outside the shadow's edge. 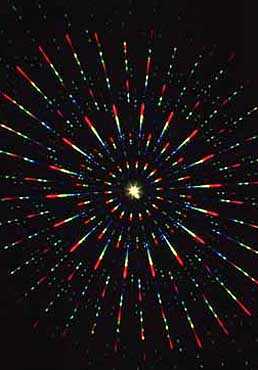 It glows in the dark

Some substances produce visible light if excited by radiation, such as invisible ultraviolet light. Visible light that is produced only when the radiation source is present is called fluorescence. Certain chemicals in laundry soaps react with sunlight to produce a fluorescence that makes clothes look brighter. Visible light that is produced even after the radiation source is removed is called phosphorescence. Some plants and animals in the sea produce a phosphorescence.

Great scientists throughout history came to their conclusions about light by experimenting. Conducting some projects will enable you to become familiar with some of light's properties.

Looking for the Glow: Which objects glow under black light?

Fluorescence is a scientific term that refers to something (usually a chemical compound) that reacts with light energy and glows brightly. In this project, you will examine compounds that react with ultraviolet light (UV), causing the compound to glow. When certain chemicals are exposed to UV light, the molecules absorb the light energy and then release it in the form of visible light. 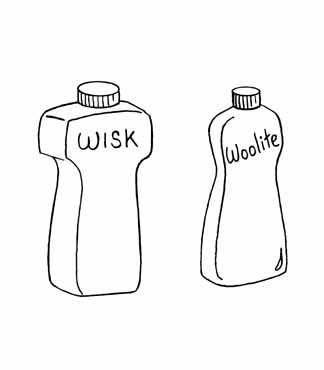 $20 for black light, $5 for detergents and for calcite.

The chemicals in many detergents can irritate the skin, so avoid contact with the skin and eyes. Always use caution when handling household chemicals. Normally UV light is considered dangerous and harmful to the eyes. However, the fixture you are using emits very long wavelength UV, which is safe to use. 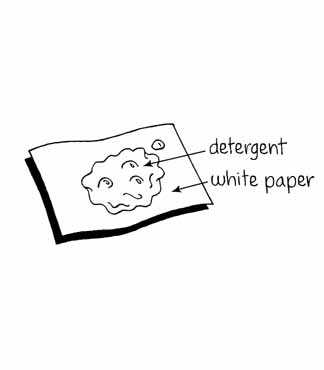 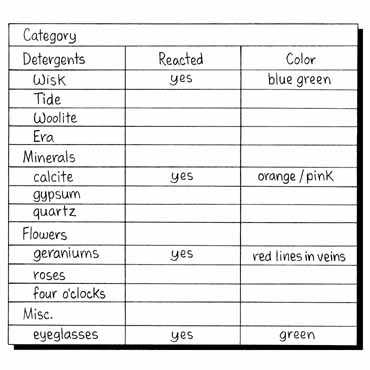 Keep a record or chart of the results of the project. It's fun to discover how many things glow under UV light.

Here is a problem that may arise during this project, a possible cause, and a way to remedy the problem.

Problem: None of the objects emits light.

Possible cause: The black bulb should glow a dark purple when on. If the bulb is not glowing, the light is not working. Turn the lights on in the room and unplug the black light from the wall outlet. Check to see if the lightbulb is firmly seated in its sockets on both ends. Repeat the project.

Refraction and Defraction: Making a rainbow

Rainbows are a good example of refraction. Water droplets are the first step in rainbow formation. The droplets form tiny transparent prisms that reflect and refract sunlight. Refraction or bending of sunlight, or white light, makes the spectrum colors of red, orange, yellow, green, blue, and violet spread out and become visible. Refraction can be made to occur in many transparent materials, including glass, plastic, or water. 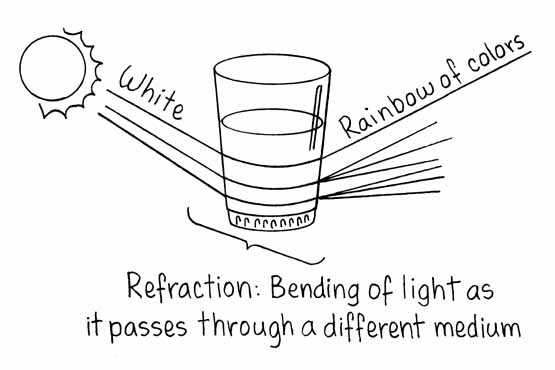 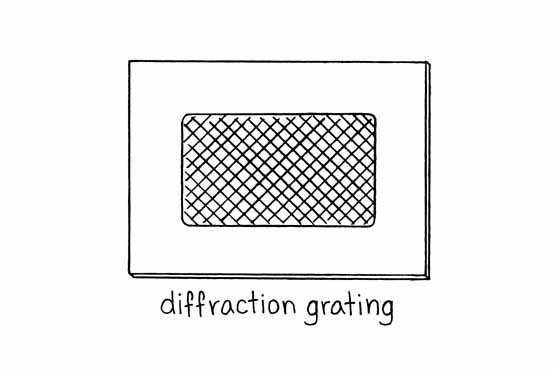 Approximately 30 minutes to perform and record the results.

Do not stick your fingers into the light sockets. Make sure the fixture is unplugged before removing the bulb. Do not touch hot bulbs. 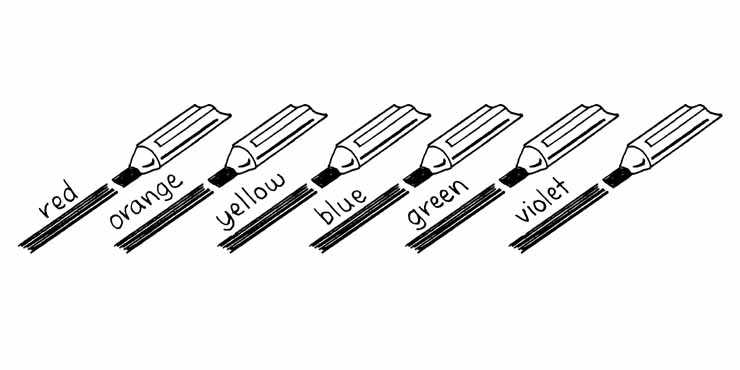 Make a chart displaying the spectrums made by the different colored bulbs. Compare your results. Write a summary of your findings.

Refraction: How does the material affect how light travels?

For the light source, you will use an LED to determine the path of light as it travels. An LED stands for an light emitting diode. It is a small electronic device that lights up when electricity passes through. LEDs emit a bright colored light yet consume little energy. With an LED, you can determine how and where the light travels.

Before you begin, make an educated guess about the outcome of this experiment based on your knowledge of the materials and the properties of light. This educated guess, or prediction, is your hypothesis. A hypothesis should explain these things:

A hypothesis should be brief, specific, and measurable. It must be something you can test through observation. Your experiment will prove or disprove your hypothesis. Here is one possible hypothesis for this experiment: "The glue stick wrapped in foil will cause less light to escape, leading to the strongest and narrowest beam of light."

In other words, the variables in this experiment are everything that might affect the passage of the light. If you change more than one variable, you will not be able to tell what had the most effect on how the material affected the light. 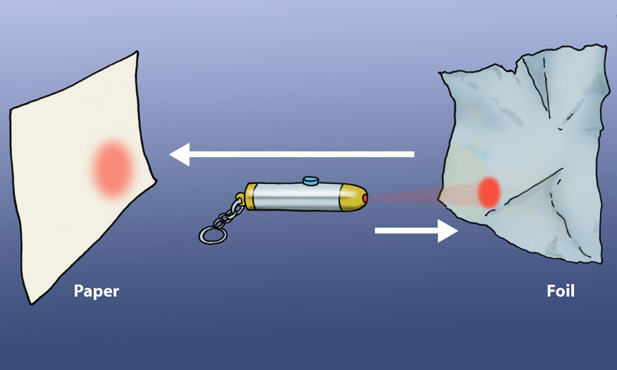 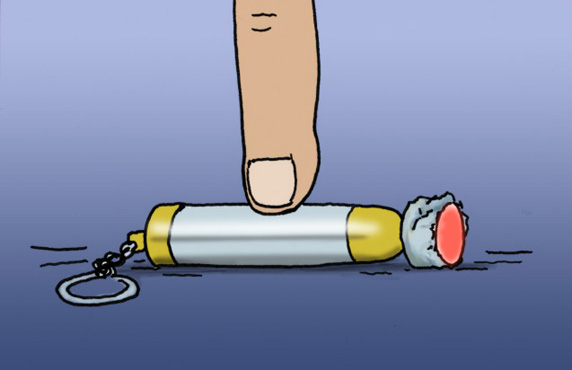 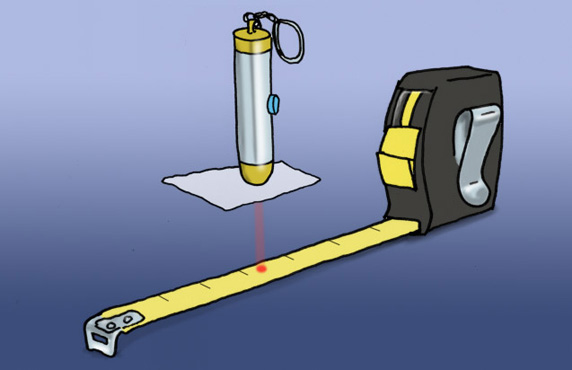 Take a look at your data and notes. Was your hypothesis correct? When the light was directed at the glue stick, how did it differ with and without the aluminum foil? Was there one or more materials that caused the light to lose intensity? What material led to the beam of light having the largest diameter? Write a paragraph on your findings.

Experiments do not always work out as planned. Even so, figuring out what went wrong can be a learning experience. Here are some problems that may arise during this experiment, some possible causes, and ways to remedy the problems.

Problem: The light did not change in diameter as expected.

Possible cause: You may have moved the LED so that it was not the same from the ruler. Try having a friend place an object that is the same height as where you are holding the LED, and repeat the experiment.

Problem: The beam of light was not visible many times.

Possible cause: The room may not be dark enough. Try conducting the experiment in the evening, or block out more light from the windows.

There are many variables you can change in this experiment. For example, you can try passing the light through a variety of materials that are only solids, such as different metals. Or you can turn the light on in front of various liquids. You can also dye the same liquid, such as water, to measure how color plays a factor in light transmission. You can also change the type of light you are using.

Design Your Own Experiment

How to Select a Topic Relating to this Concept

There are many aspects of the properties of light you can study, either as a project or as an experiment. One aspect you may want to study might be reflection. If you choose reflection, one question might be: How can I see into a puddle past my reflection? Check the Further Readings section for this topic, and talk with a teacher or with a librarian before finalizing your choice.

Steps in the Scientific Method

To do an original experiment, you need to plan carefully and think things through. Otherwise, you might not be sure what question you're answering, what you are or should be measuring, or what your findings prove or disprove.

Here are the steps in designing an experiment:

Recording Data and Summarizing the Results

In the two properties of light projects, your data might include drawings or photographs. If you exhibit your project, you need to limit the amount of information you offer, so viewers will not be overwhelmed by detail. Make sure the beginning question, the variable you measured, the results and your conclusions about light are clear. Viewers and judges will want to see how each experiment was set up. You might want to take a detailed photo at each stage. Label your photos clearly. Have colorful tables and charts ready with information and results.

Your project does not have to be an experiment that investigates or answers a question. It can also be a model, such as Newton's original experiment with window shutters and a prism. Setting up such a model would be fun, and you would learn how this concept works.