Desertification refers to the process by which fertile land is degraded and turns into desert. Whereas desertification typically changes semi-arid shrublands into desert, the process may also transform semi-arid land into nonnative grasslands incapable of supporting a wide variety of flora and fauna. Desertification may occur in any area where the evapo-transpiration rate is 70 percent or greater of total precipitation.

Both naturally occurring and anthropogenic factors contribute to desertification. Overgrazing, overcultivation, poor water management, and deforestation are major contributing factors to desertification. Climate change has influenced the expansion and contraction of deserts for eons. Variations in annual precipitation by only a few centimeters can transform drylands that support flora and fauna into degraded, arid deserts. In areas undisturbed by humans, the deserts return to drylands when precipitation levels increase. Over the next century, however, anthropogenic global climate change and population growth could accelerate desertification in many areas.

Beginning in the early Holocene, human actions began to affect the environment. The rise of agriculture, including cultivation and animal husbandry, placed increased pressure on the land and water supplies. Crop cultivation requires clearing land for planting and tilling the soil. Improper plowing and irrigation techniques increase soil erosion. When nutrient-rich topsoil erodes, farmers move on to a new parcel of land, which degrades additional land. Livestock also degrade the land by grazing. When livestock graze on dryland vegetation, the soil is exposed to the wind. Through a geological process known as saltation, wind blows the exposed soil and sand over increasingly large areas. Again, when the land degrades, humans must move livestock to other grazing areas, degrading them also and accelerating desertification.

The removal of topsoil through saltation and erosion contributes to other processes that increase the rate of desertification, including higher evaporation rates and greater soil salinity. Once vegetation is removed, the soil becomes exposed to the sun, which quickens evaporation of water from the top layer of soil. With little moisture remaining on the top layer of soil, naturally occurring vegetation struggles to take root, so the land remains devoid of vegetation. Increased evaporation rates at the soil surface prevent precipitation from seeping deep into the ground. Salts contained in rain remain near the surface of the soil. Furthermore, if the water table is within 6.6–9.8 feet (2–3 m) of the soil surface, salts may move from the water table to the surface through capillary action. High soil salinity prevents new vegetation from growing.

By the 1970s the occurrences of famine and other effects of desertification prompted the international community to act. A major famine affected the Sahel, a semi-arid transition region of Africa between the Sahara desert and the African savanna, from the late 1960s through the early 1980s. The famine killed more than 100,000 people and forced an additional 750,000 in Mali, Niger, and Mauritania to rely on food aid. In 1977 the United Nations (UN) convened the United Nations Conference on Desertification (UNCOD) in Kenya to address desertification in the Sahel and other areas.

International efforts following the UNCD resulted in the United Nations Convention to Combat Desertification (UNCCD), which entered into force in December 1996. Recognizing the environmental, economic, and social problems associated with desertification, the UNCCD seeks to combat the problem by working with national governments to establish national action programs and other long-term efforts to minimize or reverse desertification, improve agricultural practices, and decrease the effects of drought.

DESERTIFICATION: The process by which fertile land, typically semi-arid dryland, degrades and turns into arid desert.

EVAPO-TRANSPIRATION: Loss of water through both evaporation from the surface and the transpiration of moisture from the aboveground parts of plants.

HOLOCENE: The current geological epoch, which began approximately 12,000 years ago.

SALTATION: The process by which sand or soil particles move across an uneven surface when carried by the wind.

Drylands occupy approximately half of the world's total land area, and between 10 and 20 percent of the world's drylands are already degraded. Degraded drylands may become either arid desert or non-native grasslands incapable of supporting a wide range of flora and fauna. Population growth, which places an additional burden on the land and water resources, threatens to degrade even more of the world's drylands over the next century. Global climate change may also accelerate desertification in some areas, while potentially providing relief in others. Whereas poor agricultural practices are a driving force behind desertification, the implementation of good agricultural practices may slow, or even reverse the condition and produce enough food to sustain growing local populations. 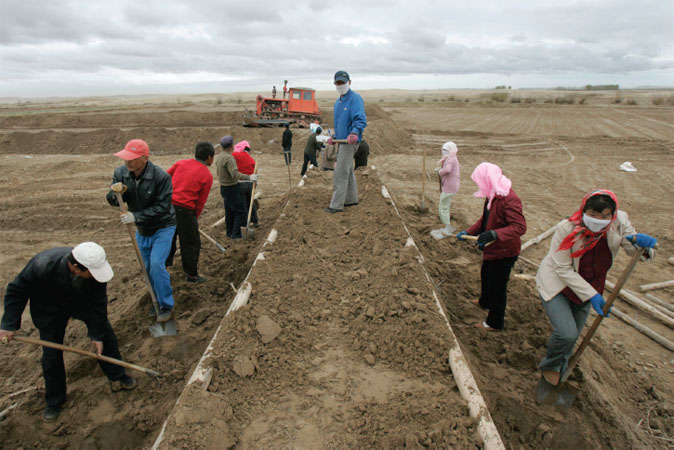 Villagers build a vegetable greenhouse in China's Gansu province on April 16, 2007. Located beside the Tenggeer Desert and the Badain Jaran Desert, it is one of the most severely deserted places in the arid region. AP Images.

Between 2010 and 2050, the world's population will grow from 6.9 billion people to approximately 9.2 billion people, a 33 percent increase. This rapid population growth, much of which will occur in developing countries affected by desertification, will necessitate the expansion of land cultivation and grazing. The desertification rate likely will increase if farmers in drylands do not adopt sustainable agricultural practices designed to minimize desertification.

Even with population growth and global climate change, the desertification rate may be slowed, stopped, or even reversed with sound policies and practices. Desertification prevention is preferable to rehabilitating degraded land, which is a difficult and expensive undertaking. Soil fixation is a major tool to prevent desertification. Soil fixation involves planting trees or shrubs to serve as a buffer zone and windbreaker to reduce soil erosion and evapo-transpiration. Enriching the soil with nitrogen-fixing legumes or synthetic fertilizers may also encourage plants to root and grow. These plants may then fixate the soil. Even educating farmers about proper plowing and irrigation techniques may prevent soil erosion and extend the productive life of a field.

James Fairhead and Melissa Leach have written two books about the African rainforest and the changes that have occurred over time. They suggest that some of the reductions to the rainforest areas are due to climate changes over many years and not necessarily due to human exploitation. In fact they suggest that small-scale farming has actually increased the health of some rainforests and enhances rainforest regeneration.

Enriching the Landscape: Social History and the Management of Transition Ecology in the Forest—Saving the Mosaic of the Republic of Guinea

…. The striking presence of dense semi-deciduous rainforest patches in an otherwise open woodland savanna landscape, and the sharp boundary between the these vegetation forms, has intrigued observers and invited considerable ecological debate as to the origin and evolution of this vegetation mosaic. In Kissidougou prefecture of the Republic of Guinea this issue is not merely academic: theoretically derived interpretations of forestsavanna transition are orienting external perceptions of local land use and driving environmental policy.

The predominant view, shared by most outside observers of Kissidougou at all dates, considers the patches of forest island around villages and gallery forests to be relics of the original, and formerly much more extensive, dense humid forest cover (e.g. Valentin, 1893; Adam, 1948; Schnell, 1952; Guinée, 1988). Human impact is seen as destructive of forest, causing progressive conversion to grassland as a result of shifting cultivation and the lighting of bush fires (e.g. Aubréville, 1949; Keay, 1959; Gayibor, 1986; Jean, 1989). Thus the ‘pre-forest’ zone, spatially, is portrayed as temporally ex-forest, or ‘derived’ savanna. Climate (e.g. annual rainfall levels in excess of 1,600 mm) and the presence of humid forest species and associations, are taken as proof of high forest potential and indicative of the past existence of actual forest. The mixed forest-savanna species composition sometimes found at the boundaries of forest patches is taken as evidence of savanna encroachment (Adam, 1968).

A second view, initially outlined for Nigeria in an article in Africa by Morgan and Moss (1965; Moss and Morgan, 1970; cf. Avenard et al., 1974, for Côte d'Ivoire), considers the forest-savanna mosaic as a relatively stable vegetation pattern, principally reflecting edaphic differentiation (i.e. variations in soil conditions, but also in water table and drainage). Only certain soils and sites can support forest, and inhabitants of the mosaic use and maintain the diversity of its vegetation types (Moss, 1982; Blanc-Pamard, 1978). This position is not necessarily incompatible with the first, where analysts recognise stability in a residual mosaic following savannisation (e.g. Adejuwon and Adesina, 1992). Research in Côte d'Ivoire has modified the argument for edaphic stability, showing the forest to be advancing into savanna areas (Asjanohoun, 1964; Miège, 1966; sf. Aubréville, 1962, for Gabon). And explaining this is the context of climatic rehumidification of the Upper Guinea Coast region. This is the consensus of climate historians, who argue that dryer climate conditions than the present prevailed at various periods: between 700 BP and 150 BP in the recent past (Brooks, 1986; Nicholson, 1979); between 4,500 and 3,500 BP in the medium term (Lézine and Casanova, 1989; Talbot et al., 1974).

Both the ‘derived savanna’ and ‘edaphic mosaic’ arguments consider forest patches as ‘natural’ and ‘original’, whether as relics or as stable patches. There is a third possibility, however: that forest patches in savanna result from human disturbance and the people's activities actually encourage the formation of forest vegetation. This possibility carries very different implications for assessments of human interaction with other ecological variables in the shaping of the forest-savanna mosaic, and hence for environmental policy. A few studies of fallow dynamics show how certain local agricultural practices encourage the regeneration of secondary forest in savanna (Amanour, 1994; Guelly et al., 1993). Inhabitants in one area—the Baoulé ‘V’ of Côte d'Ivoire—themselves suggest that ‘where one cultivates, the forest advances’ (Spichiger and Blanc-Pamard, 1973). Our study in Kissidougou suggests that local practices which enhance forest regeneration may be of more general significance in accounting for the long-term evolution of the forest-savanna mosaic….

FAIRHEAD, JAMES, AND MELISSA LEACH. “ENRICHING THE LANDSCAPE: SOCIAL HISTORY AND THE MANAGEMENT OF Page 190  |  Top of ArticleTRANSITION ECOLOGY IN THE FOREST—SAVING THE MOSAIC OF THE REPUBLIC OF GUINEA.” AFRICA: JOURNAL OF THE INTERNATIONAL AFRICAN INSTITUTE 66 (1996). EDINBURGH, UK: EDINBURGH UNIVERSITY PRESS, 1996.

Slegers, Monique F., and Leo Stroosnijder. “Beyond the Desertification Narrative: A Framework for Agricultural Drought in Semi-Arid East Africa.” Ambio 37, no. 5 (2008): 372–380.