Understanding anthropogenic change is crucial to understanding our world and its historical and modern transformations. Anthropogenic changes are alterations that result from human action or presence. They may be deliberate, such as when land is cleared for agriculture, modifying landscapes and introducing new species.

Anthropogenic changes may also be an unrecognized or poorly understood side-effect of human activity, as with the decreased biodiversity that accompanies increased urbanization or with much of the pollution resulting from industrialization and the technological advances of the twentieth century.

Increased production of carbon dioxide and other greenhouse gases and the resulting alteration of global climate is a good example of anthropogenic change that has been slowly revealed over the past several decades. Much of the difficulty in understanding and measuring anthropogenic climate change is caused by the complexity of Earth systems involved and by the challenge of differentiating natural variation from anthropogenic change.

Although people have been altering their environment since prehistoric times, these changes were largely perceived 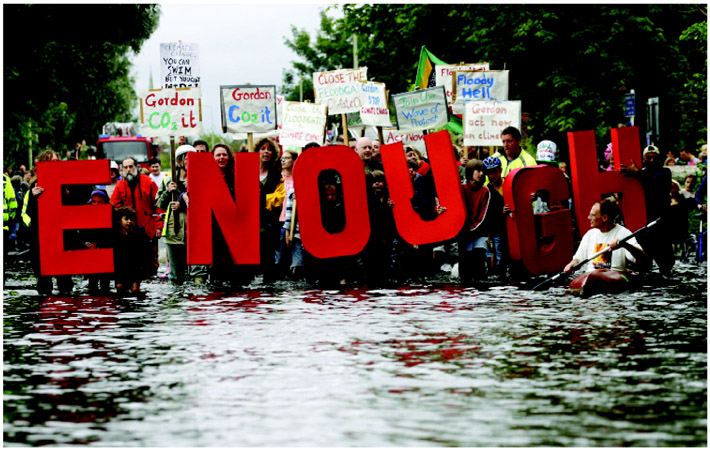 In 2007, regions in the United Kingdom were hit by severe floods. Claiming that anthropogenic climate change was to blame for the flooding, protesters in Oxford, U.K., held a demonstration demanding change. AP Images.

as beneficial. Environmental degradation such as flooding, deforestation, pollution, and erosion were seen as temporary or small-scale problems that could be reversed by altering local practices or by moving to new areas, despite the concern of some nineteenth century scholars like George P. Marsh, who published Man and Nature— one of the first critical looks at anthropogenic change—in 1864.

By the 1950s, many scientists were beginning to understand that at least some anthropogenic changes were global, rather than local or regional in nature, and there was concern that some changes were irreversible. In the following decades, the term anthropogenic became more commonly used outside its original context in ecology (replacing the phrase man-made), and was used to describe much more extensive human influence than the landscape alteration and pollution highlighted before the 1980s.

Anthropogenic climate change has become one of the foremost environmental issues facing the world. Richard Kerr points out in an article appearing in the July 6, 2007 issue of Science that understanding how human influences on climate interact with changing natural systems is vital.

BIODIVERSITY: Literally, “life diversity”: the number of different kinds of living things. The wide range of organisms—plants and animals—that exist within any given geographical region.

DEFORESTATION: Those practices or processes that result in the change of forested lands to non-forest uses. This is often cited as one of the major causes of the enhanced greenhouse effect for two reasons: 1) the burning or decomposition of the wood releases carbon dioxide; and 2) trees that once removed carbon dioxide from the atmosphere in the process of photosyn-thesis are no longer present and contributing to carbon storage.

EROSION: Processes (mechanical and chemical) responsible for the wearing away, loosening, and dissolving of materials of Earth's crust.

Models of the feedback between deforestation, agriculture, air pollution, and climatic systems have emerged as critical areas of research and will shape regional predictions and government policies that attempt to address this human-caused crisis. Further research on the anthropogenic causes of climate change, and how they can be altered or mitigated, will continue to be critical in the next century.

Hughes, J. Donald. An Environmental History of the World: Humankind's Changing Role in the Community of Life. New York: Routledge, 2001.

McNeill, J. R. Something New Under the Sun: An Environmental History of the Twentieth-Century World. New York: W. W. Norton, 2000.

Turner, B. L., II, ed. The Earth as Transformed by Human Action: Global and Regional Changes in the Biosphere over the Past 300 Years. Cambridge: Cambridge University Press, 1990.