Sound is produced by the vibration of some sort of material. In a piano, a hammer strikes a steel string, causing the string to vibrate. A guitar string is plucked and vibrates. A violin string vibrates when it is bowed. In a saxophone, the reed vibrates. In an organ pipe, the column of air vibrates. When a person speaks or sings, two strips of muscular tissue in the throat vibrate. All of the vibrating objects produce sound waves.

All waves, including sound waves, share certain characteristics: They travel through material at a certain speed, they have frequency, and they have wavelength. The frequency of a wave is the number of waves that pass a point in one second. The wavelength of a wave is the distance between any two corresponding points on the wave. For all waves, there is a simple mathematical relationship between these three quantities called the wave equation. If the frequency is denoted by the symbol f the wavelength is denoted by the symbol λ, and the symbol v denotes the velocity, then the wave equation is v = f λ. In a given medium, a sound wave with a shorter wavelength will have a higher frequency.

Waves also have amplitude. Amplitude is the “height” of the wave, or how “big” the wave is. The amplitude of a sound wave determines how loud its sound is.

Longitudinal Waves Sound waves are longitudinal waves. That means that the part of the medium vibrating moves back and forth instead of up and down or from side to side. Regions where the particles of the medium are pushed together are called compressions. Places where the particles are pulled apart are called rarefactions. A sound wave consists of a series of compressions and rarefactions moving through the medium.

As with all types of waves, the medium is left in the same place after the wave passes. A person watching and listening to a television across the room receives sound waves that are moving through the air, but the air is not moving across the room.

The speed of sound increases by 0.6 meter per second (m/s) for each Celsius degree rise in temperature (T). This information can be used to construct a formula for the speed (v) of sound at any temperature:

At average room temperature of 20°C, the speed of sound is close to 343 meters per second. 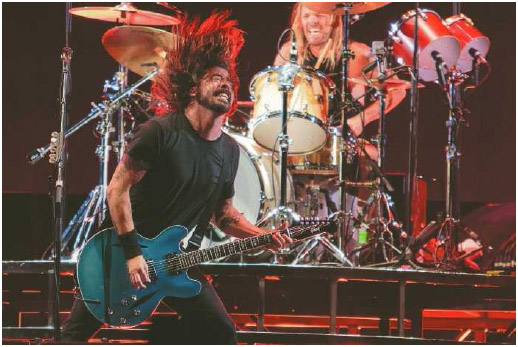 Intensity and Perception of Sound

The human ear can detect sound intensity levels as low as 10-12 W/m2 and as high as 1.0 W/m2. This is an incredible range. Because of the wide range of sound intensity that humans can hear, humans perceive loudness instead of intensity. A sound with 10 times the intensity in watts per square meter is perceived as being only about twice as loud. 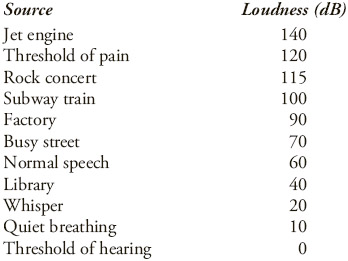 *logarithmic scale a scale in which the distances that numbers are positioned, from a reference point, are proportional to their logarithms