Humans have existed for about 200,000 years. But that's a sliver of Earth's 4.5 billion-year history—0.004 percent to be exact! For most of that time, humans have had a minimal impact on the planet. Until about 12,000 years ago, human populations were small and thinly spread across the planet. People subsisted on hunting and gathering and were always on the move in search of food. After humans learned how to farm, however, all of this changed.

The dawn of agriculture marked a major change in how humans interacted with the planet. No longer did people subsist only on what they found growing in nature. Instead, they began to grow crops and raise livestock. This meant clearing native vegetation, redirecting waterways, and making other changes to Earth's environment to suit their new agricultural needs.

Agriculture allowed humans to make permanent homes and establish large civilizations. Reliable food sources meant the human population could grow rapidly. During the era of hunting and gathering, there were an estimated 10 million people on Earth. By the first century CE, the human population had increased to 300 million.

The rise of new technologies such as industry, transportation, and hygiene allowed the human population to grow even further. By 1800 the population had reached an estimated 1 billion, and by 2017 it had reached 7.5 billion. As more and more people have inhabited Earth, the impact on the environment has grown Page 436  |  Top of Articlesignificantly. Indeed, there have been substantial, sometimes irreversible changes to the planet's land, water, atmosphere, and biodiversity. For example, the rapid growth of the human population has led to resource depletion, loss of freshwater, increased prevalence of epidemics, climate change, and species extinction.

Carbon dioxide:
Agasconsisting of one atom of carbon and two atoms of oxygen.
Carbon footprint:
The amount of carbon dioxide a person or a group produces by using fossil fuels.
Climate:
Weather trends in a region over time.
Climate change:
Changes in the climate that result from either human activity, such as the burning of fossil fuels, or from natural changes in Earth's environment.
Combustion:
A chemical reaction that produces heat and light. Most commonly observed when something is lit on fire.
Ecosystem:
A network of relationships between living and nonliving things within an environment.
Emissions:
Discharged gas or radiation.
Environment:
Everything, living or nonliving, that surrounds an organism.
Fossil fuel:
Fuel, such as gas or coal, that comes from the breakdown of formerly living organisms.
Global warming:
The ongoing rise in Earth's temperature due to fossil fuel emissions.
Greenhouse gas:
Gas that traps heat within an atmosphere.
Groundwater:
Water that collects in soil and between rocks.
Industrialization:
A movement toward using machines and factories to do work that was once done by people.

Humans rely on Earth's resources for survival. For example, we need water and soil to grow crops, and we need trees to build houses and harvest firewood. We also use Earth's resources to create and power our technology. We use minerals such as copper, iron, and aluminum to manufacture everything Page 437  |  Top of Articlefrom cars to cell phones, and we use energy resources such as petroleum and coal to generate the energy to power these devices, heat our homes, and manufacture goods.

Many of Earth's resources can be renewed, meaning they are naturally replenished over time. For instance, wood is a resource because, after mature trees are harvested, new trees can be planted to replace them. However, many resources require hundreds, even millions of years to be replenished naturally. Fossil fuels, for example, come from the remains of dead plants and animals that have been heated and pressurized under Earth's surface for millions of years. Because fossil fuels require such a long time to renew, scientists consider them nonrenewable. This means that, once they are used up, they cannot be replenished.

As the human population increases, so does the amount of resources we use. And as we develop new technologies, we use even more resources. Think about how the invention of the automobile changed how much oil and petroleum humans use. In 1895 coal was by far the most common source of energy in the United States. Americans used only a tiny amount of petroleum, mainly as fuel for kerosene lanterns. However, after scientists discovered that gasoline made from petroleum could be used to power cars and other machinery, petroleum use skyrocketed. By 2012 the amount of energy Americans got from petroleum was more than double the amount from coal. This increase in the use of petroleum is likely to continue as gasoline-powered cars become more affordable to people all over the world.

When we use natural resources, we don't just remove, or deplete. We also leave behind waste products that may be damaging to the environment. For example, the mining and processing of copper metal creates sulfuric acid, a corrosive Page 438  |  Top of Articleliquid that can leach into the ground and poison water supplies. Even farming can create harmful by-products. The fertilizers that farmers use and the manure produced by their livestock can emit methane and nitrous oxide into the atmosphere. These greenhouse gases directly contribute to climate change by altering the naturally occurring greenhouse effect. 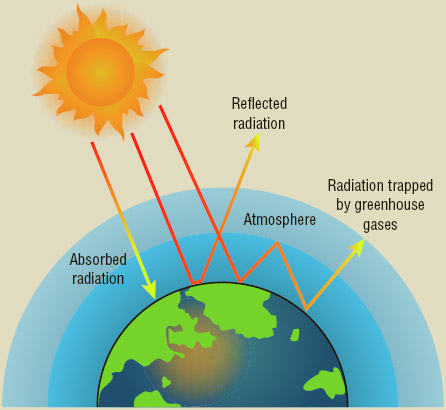 Greenhouse gases trap heat in Earth's atmosphere that would otherwise escape into space. This natural process has been operating for millions of years and has kept Earth's temperature warm enough to support life. However, when the amount of greenhouse gases in the atmosphere increases due to human activity, too much heat can be trapped, and the planet's overall temperature rises above its normal range. Page 439  |  Top of ArticleThis is known as global warming. Fossil fuels contribute to global warming because they release sulfur dioxide, nitrogen dioxide, nitrous oxide, carbon monoxide, and carbon dioxide. Some of these gases, such as carbon dioxide and nitrous oxide, are greenhouse gases. The others react with other chemical compounds in the atmosphere to produce greenhouse gases.

Human-caused global warming can have disastrous consequences for Earth. As planetary temperatures rise, climate changes. Storms can become more severe, destroying plant and animal habitats. Places that once received ample precipitation may become too dry to support the organisms that live there. Climate change can also cause sea ice to melt. When glaciers and ice sheets melt, sea levels rise and ocean currents shift. Rising sea levels can threaten the homes of the people, plants, and animals who live on islands or along coastlines. Shifting ocean currents can alter aquatic ecosystems.

The impact that humans have had on the planet has been staggering. In our short time on Earth, we have made significant changes to the planet's natural systems. To address the impact we have on Earth, scientists have begun to study how to make agriculture, industry, and other human activities more sustainable. This means reducing the amount of pollution we create and replenishing natural resources faster than we use them.

Scientists and governments have also begun working together to reduce our impact on the planet and restore balance to Earth's natural systems. Many countries carefully monitor pollution and greenhouse gas emissions. Some have tried to reverse the damaging effects of pollution and other human-made changes. For example, some governments have increased the amount of renewable energy resources, such as wind and solar, that power their countries. Others have introduced policies that Page 440  |  Top of Articleincrease the fuel efficiency of cars sold in their country. Some have removed dams and levees that impede the natural flow of rivers. Still others have made plans to use land more efficiently, protect wetlands, and safely dispose of mining by-products. 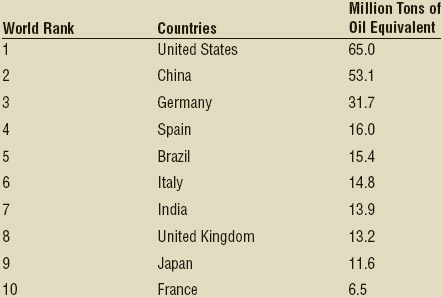 But these changes have been occurring slowly. It took many years for scientists to agree on the link between human activity and climate change. Even after scientists proved that humans have significantly altered Earth's climate, many people remain skeptical. Some government leaders downplay or refuse to acknowledge their country's role in climate change. Others understand the importance of addressing environmental issues and have made agreements with other countries to reduce harmful activities and pollutants. Many countries support the creation of new technologies that will lessen human impact on the environment. However, scientists agree that unless we take drastic action, global warming, climate change, and other harmful effects on Earth will continue to worsen in the coming years.